London based animator Uli Meyer is hard at work on a proof of concept test for his animated Molesworth film. Uli has scrutinized the Searle line and relates the benefit of his study:


"In order to create the backgrounds for Molesworth I have been studying Ronald Searle's drawings up close. The first image you can see here is a close up detail of an engine block (full image in the second picture). Ronald Searle drew many of his illustrations with a fountain pen and when you look at the originals up close, you will find that he did very little underdrawing. He used a pencil only sometimes, to very lightly block in a composition and then literally 'wrote' down the drawing as he saw it in his mind's eye. This must have happened very quickly. Many of the lines are not opaque because the ink flow of his pen wouldn't catch up with the speed he was throwing down the lines. He would then scribble over some of the lines again and again to darken them. Some people have described Ronald's drawing style as nervous and hesitant but it is quite the opposite. His drawings are so assured and confident, there is no sign of struggle or doubt. He had an incredible memory of what things looked like and rarely used any reference. His output was so prolific, he would create several illustrations of this kind every day. Ronald was left-handed and was lucky that he wasn't forced to write with his right hand when he was a child. When you learn to write you practise precision by crafting the alphabet with your pen and that precision is apparent in Ronald's every drawing. He drew like others would write letters, directly from his mind down to his hand and onto the paper. Marvellous!" 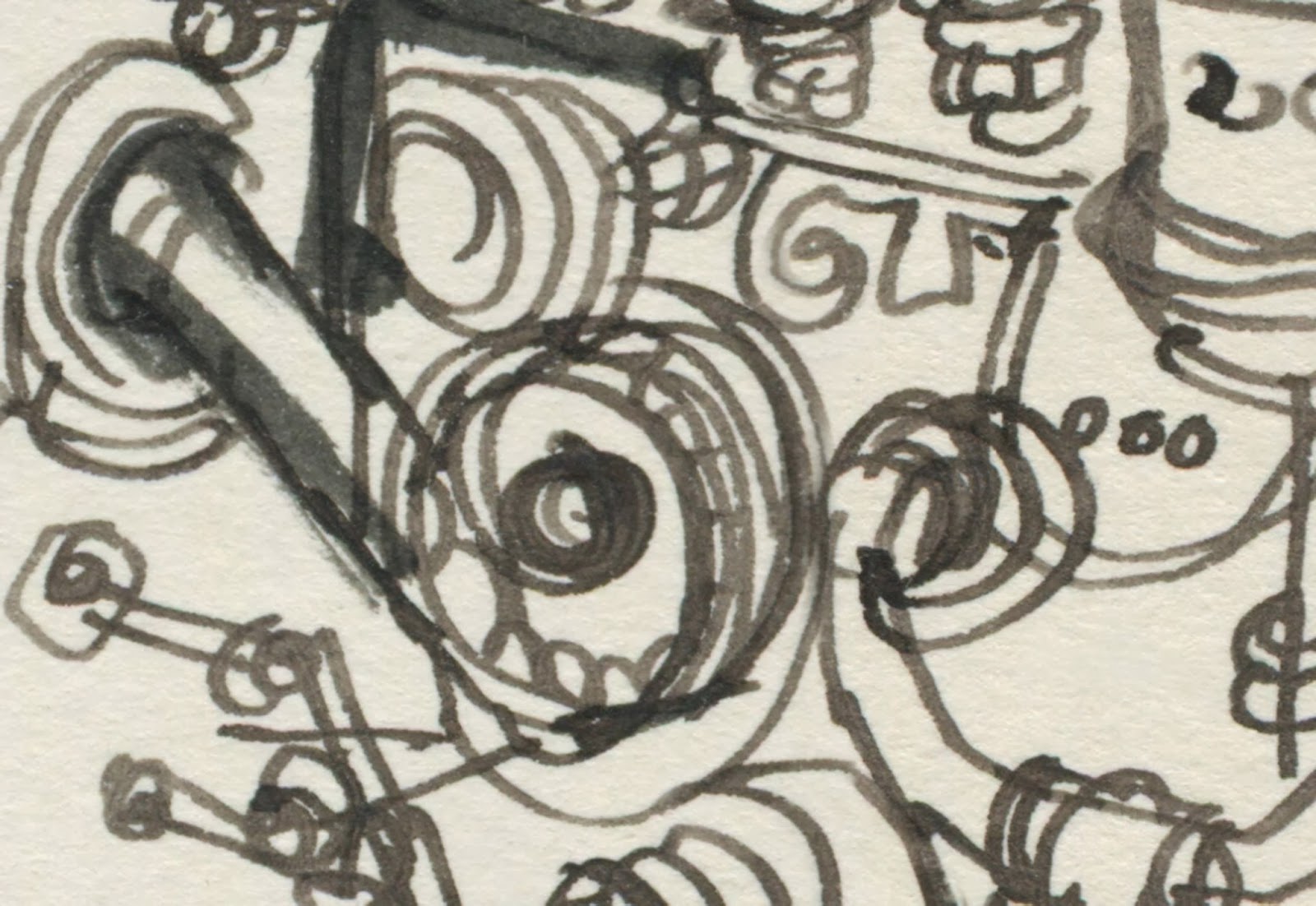 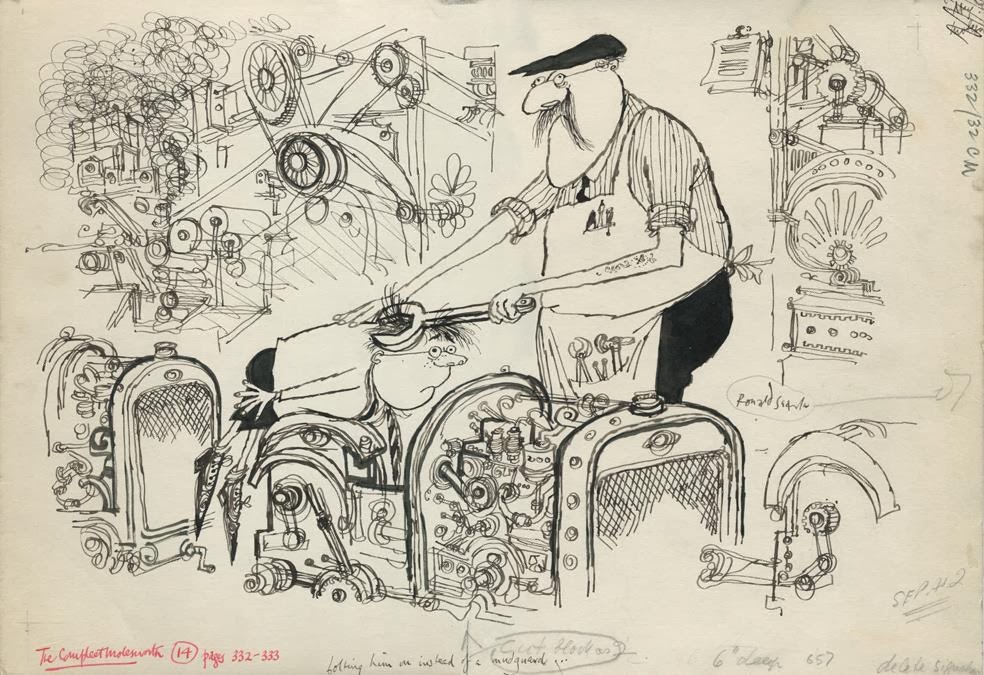 Posted by Matt Jones at 9:28 PM No comments: 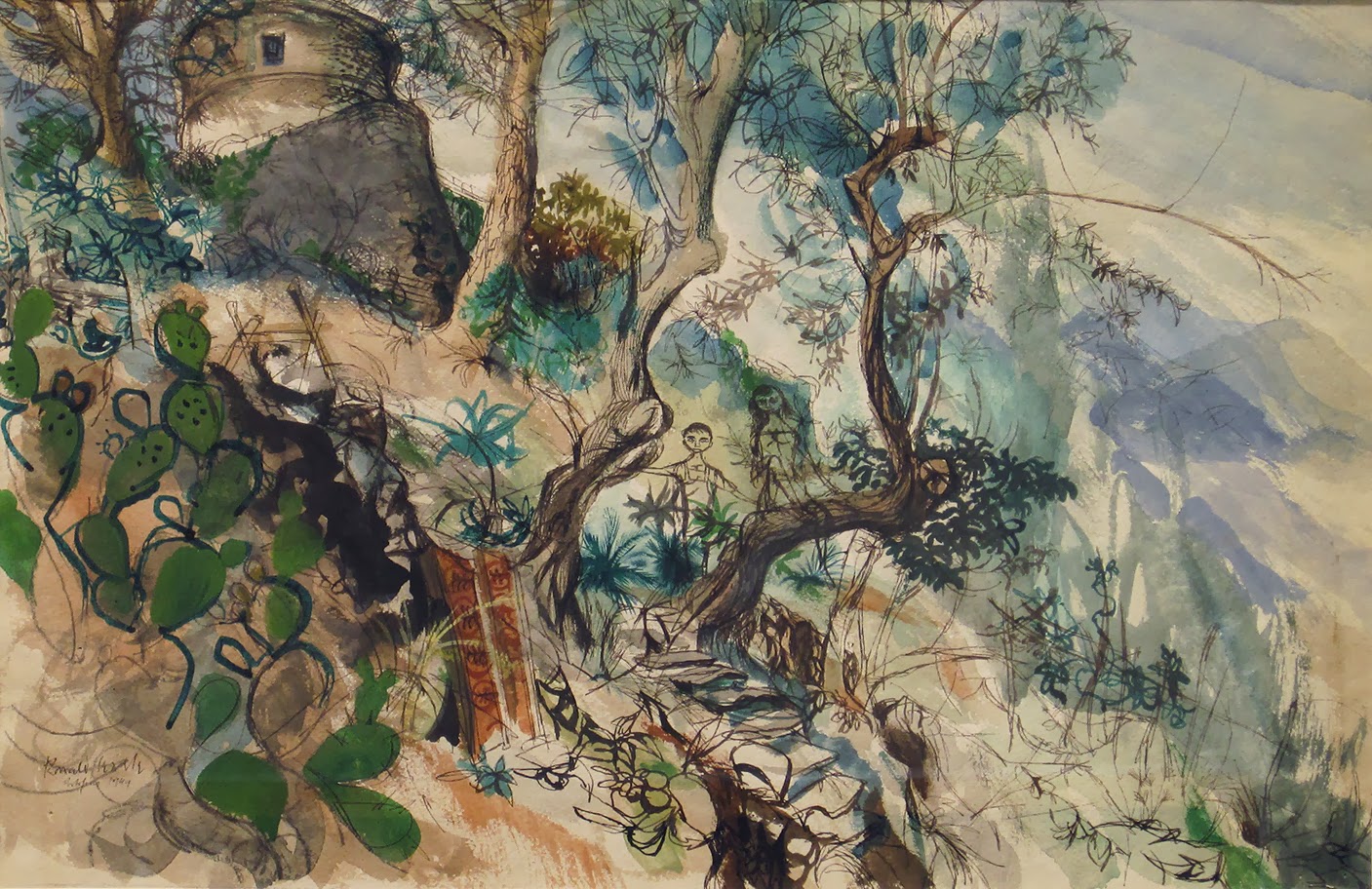 Ronald Searle first visited Italy in 1949 with his wife Kaye. They explored Portofino and Rapallo where they looked up humourist and caricaturist Max Beerbohm.
'In October, the Searles visited Italy and stayed with their friend Jennie Nicholson (daughter of Robert Graves) in Portofino, and she had taken them along the coast to Rapallo to meet the venerable Max. 'I have a little talent,' he explained to Ronald, 'but I have used it well.' Ronald was hardly neglecting his own; in Portofino he completed no fewer than ten paintings that were exhibited at Wolf Mankowitz's Little Gallery immediately on his return'  (Russell Davies) 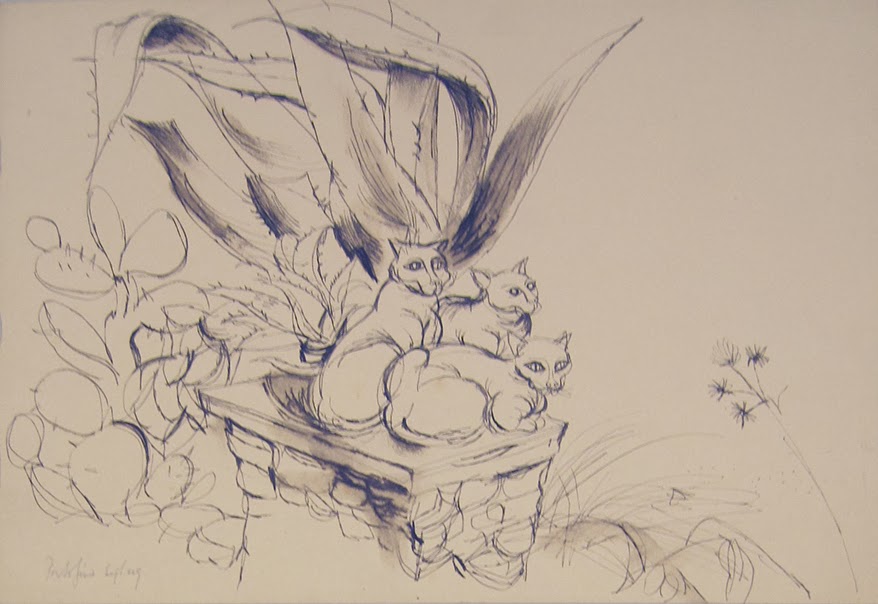 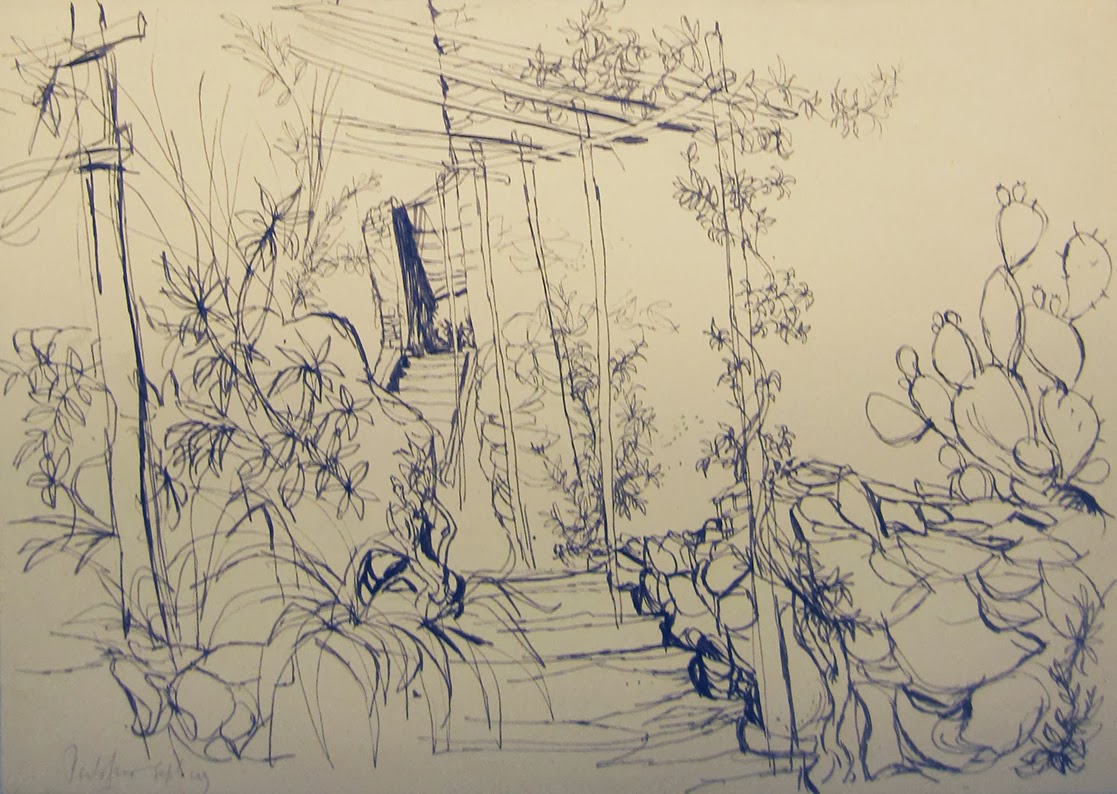 ". . . She put the great book on a table beside me. "I thought you might want to look at this—the Festschrift volume of tributes given to Max by his friends and admirers to commemorate his eightieth birthday. I think you will enjoy it. But first you must take a nap. First you must rest."

I said I would try. "I'll call you for tea," she said. Miss Jungmann was gone. I was tired. I stretched out on the sofa, but I found I couldn't sleep. I opened the great Festschrift volume. The first thing that greeted my eye was a superb full-page colored drawing of Max by Ronald Searle, the Punch cartoonist. It shows Max in a toga, with a laurel wreath on his head, at a rakish angle—the same angle at which he habitually set his straw hat.


Max was the only man in the world, I thought, who could look rakish in a laurel wreath, and Ronald Searle perhaps the only man who could make him do it. Max's arms are bare, and, anachronistically, he is smoking a cigarette in a long holder. He looks infinitely bored, presumably at the echoing plaudits that, around the civilized world, greeted his eightieth birthday. The caption beneath the drawing reads, "Max Accepts with Resignation His Place Among the Classics."
The Searles' charm won Beerbohm over and he was persuaded to pen the preface to Ronald's second book of collected cartoons 'The Female Approach'. 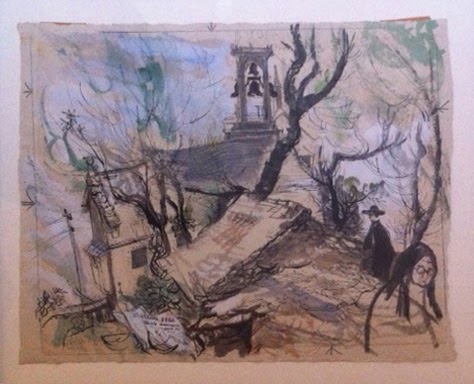 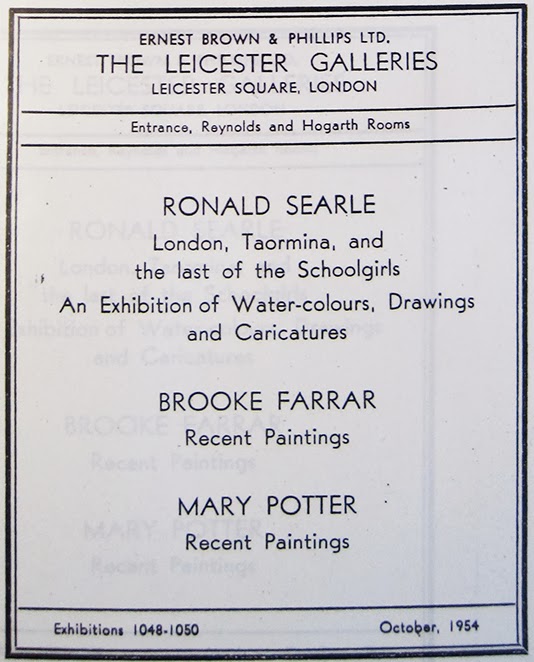 In 1953 Searle revisited Italy to recharge his creative batteries. He wanted to see Renaissance artworks and sketch the people and countryside. He actually made two trips that year travelling the length of the country from Milan to Sicily. The resulting drawings show a different, surprising side to the artist and were exhibited and sold at the Leicester Galleries, London the next year.  In his biography of Searle Russell Davies writes:

'A pleasant consequence of his high professional standing was that Searle could now award himself the occasional break from his pattern of work. Already widely travelled in places where few tourists would be terribly eager to go, he had so far never had the chance to immerse himself, alone, in the splendours of Renaissance art. In 1953 he put this right. His first trip, in midsummer, was devoted to resting and looking. . . In Milan, the itinerary began propitiously with time spent in the company of Giacomo Manzu, the sculptor and lithographer. . . Rome, Naples, Capri and Pompeii followed; Sienna, in time for the Palio; and the great binge of Florence, taken far too quickly, of course, but as an investment of information for the return visit. Searle enjoyed his solitary wandering, though it left him open to rather haunting experiences like the one that occurred in the Grand Hotel in Milan. He made an immediate note of it:

"The little waiter who brings me my breakfast - a sad, grey, little man with sunken cheeks and pink rims to his eyes - just brought in some coffee 'for a nightcap'. He hesitated a moment and, slightly embarassed, said: "Scuse medonta mind, but why do you use your left hand to write? I saw for the furst time this morning that you usa left hand and I look to see whata wrong with the other, but it looka alright to me. I never see it before, except once with a soldier who had the other one offa here' - sawing at his shoulder. I told him I was born left-handed and it was fairly commonplace in England. 'Well,' he said, 'I never see it before.' (He must be 50.) Surely left-handedness can't be so rare in Italy - or peculiar to England. Anyway I seem to recall that Leonardo was left-handed. The waiter went out quite convinced that it was rare and strange - still puzzled that it should happen."

It was the waiter who now seemed rare and strange: was this some complicated defence on his part against the superstitions that still attached to the left-hander, or mancino, in Italy? Happily, Leonardo's 'Last Supper' was close by for reassurance. . . 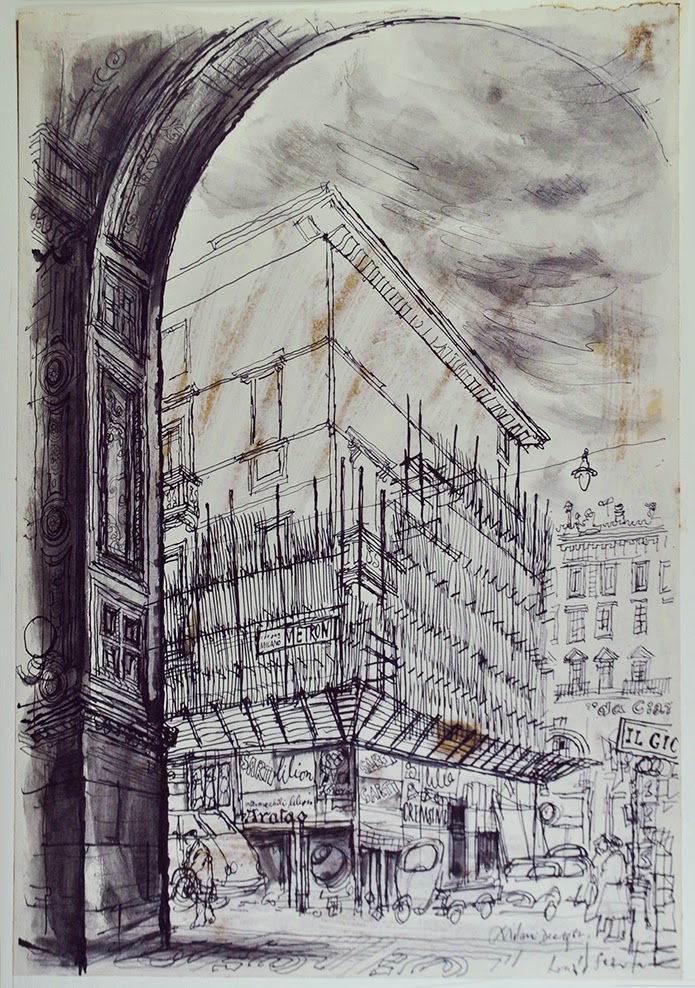 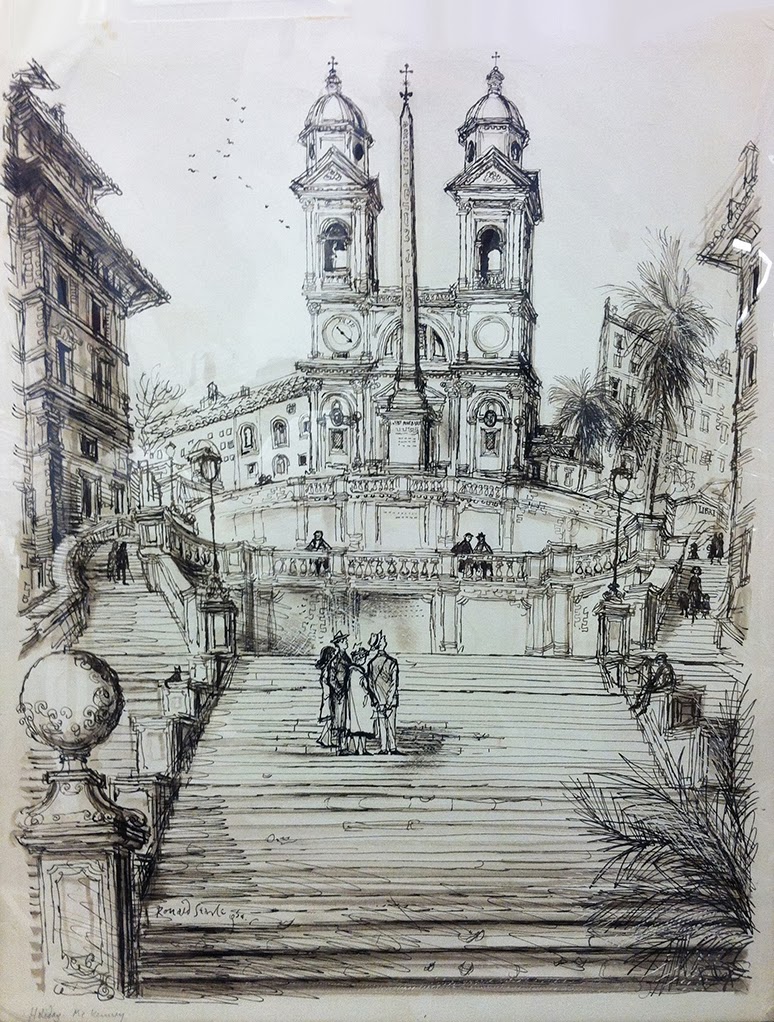 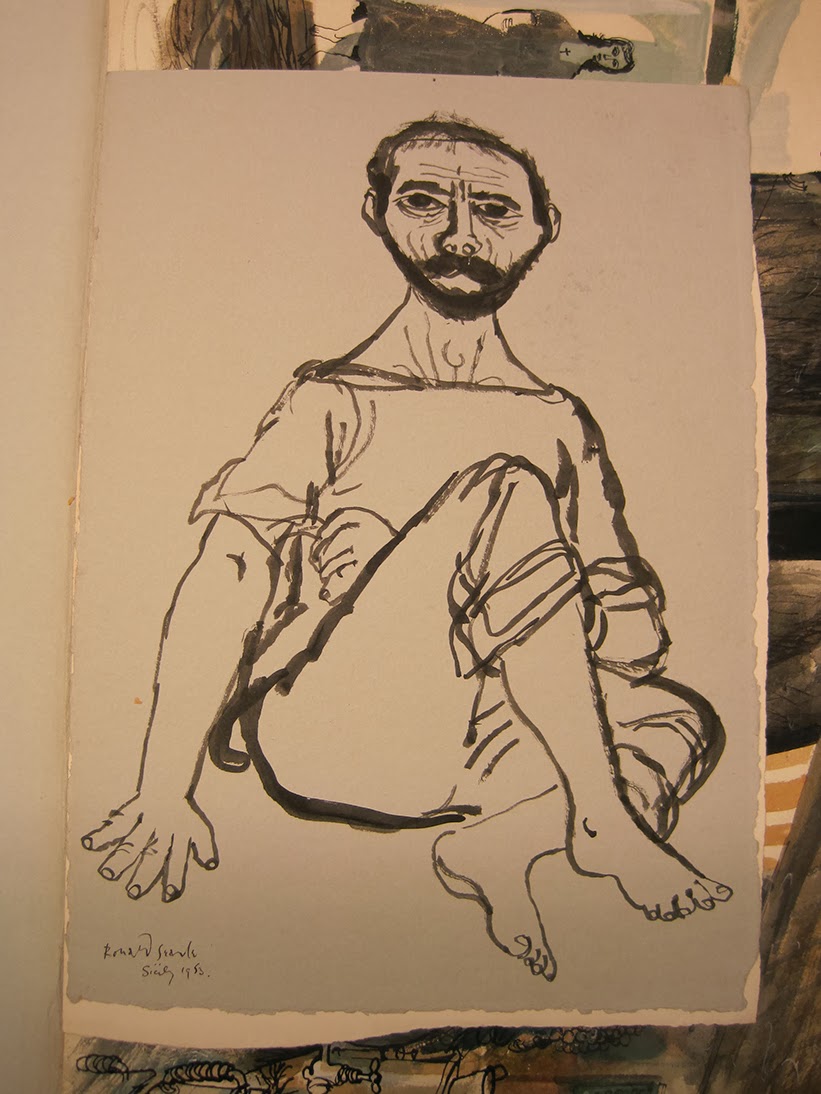 '. . . the second Italian trip came round. This time the whole of October and November were allotted to the journey, which took Searle from Milan right down, through a month's discouragingly awful weather, to Taormina in Sicily, where his 'enormous sketch-block' finally came into its own. At one point Ronald's activities became so intimately intertwined with those of the local fisherman that he used 'the fresh black ink of a newly-caught cuttlefish to sketch the head of one of the men who caight it'. To return to such basics of existence, and to the improvisatory methods of his imprisonment, must have reminded him of the dangers of an over-civilization of his talent. He was entering again intot the spirit of exile. His many paintings of Sicily, mostly sold at the Leicester Galleries in 1954 in an exhibition with the no-nonsense title of 'London, Taormina - and the last of the schoolgirls', were watercolours and gouaches; it would take ten years, Searle said, to master oils, and no time would be left for anything else.' (Russell Davies) 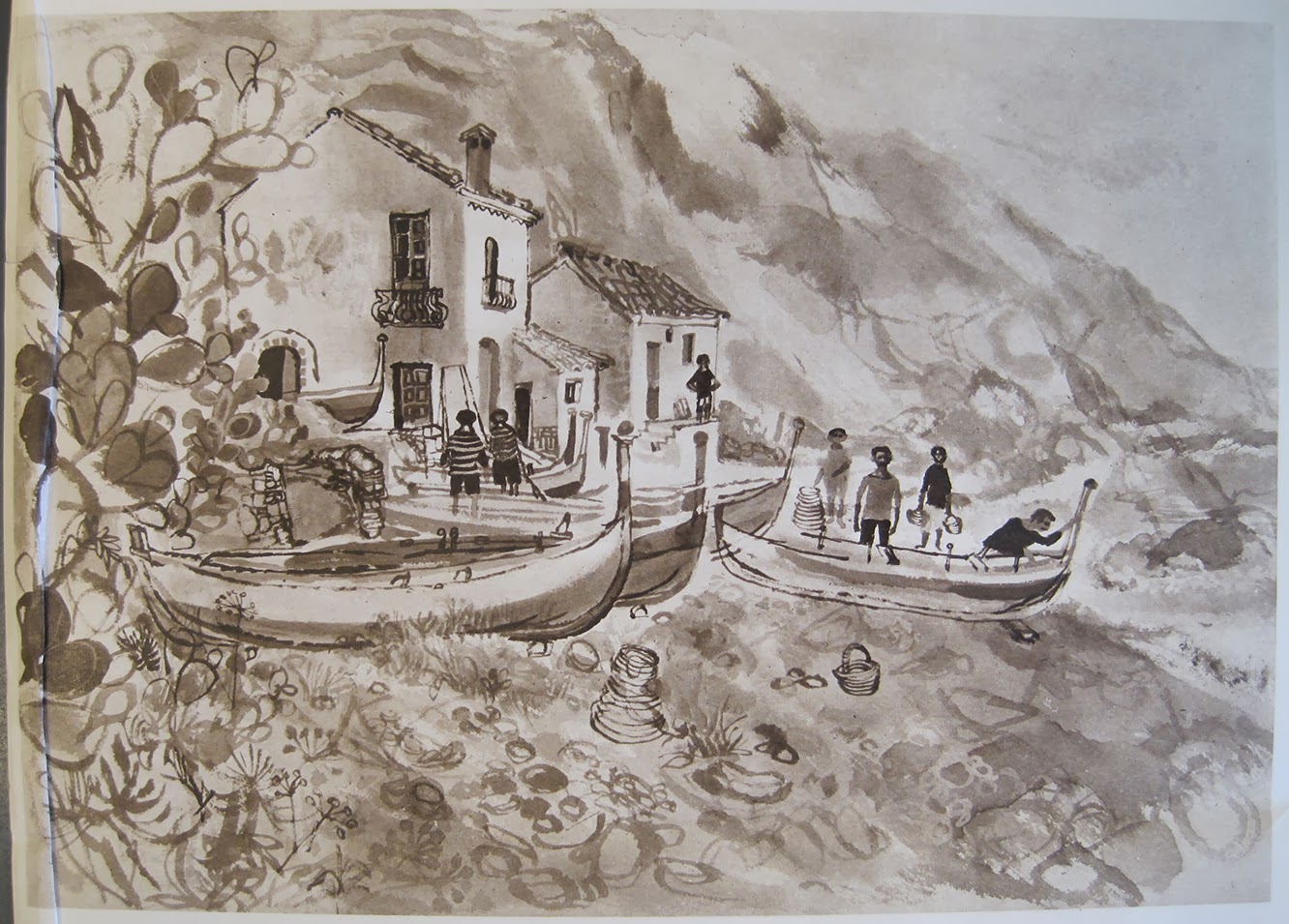 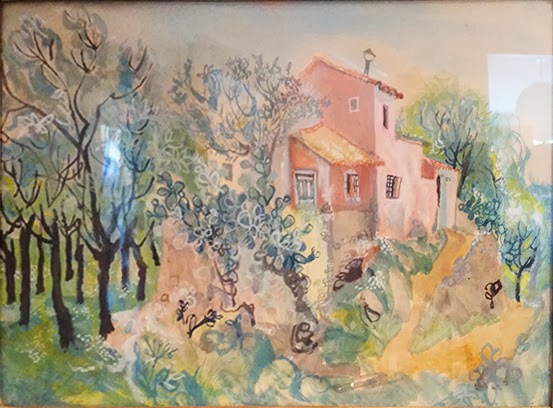 'The look of these paintings was quite 'hot': complex and jungly lines made legible with bold colour. Sometimes one misses the human figure; a preparation seems to have been made for a foreground actionthat does not occur. Perhaps the artist felt this too; it is certainly a problem he could have wrestled with. As his friends have said of him, it was 'another way he could have gone'. But instead, in December, he went home to his contracts and agreements and responsibilities.' (Russell Davies) 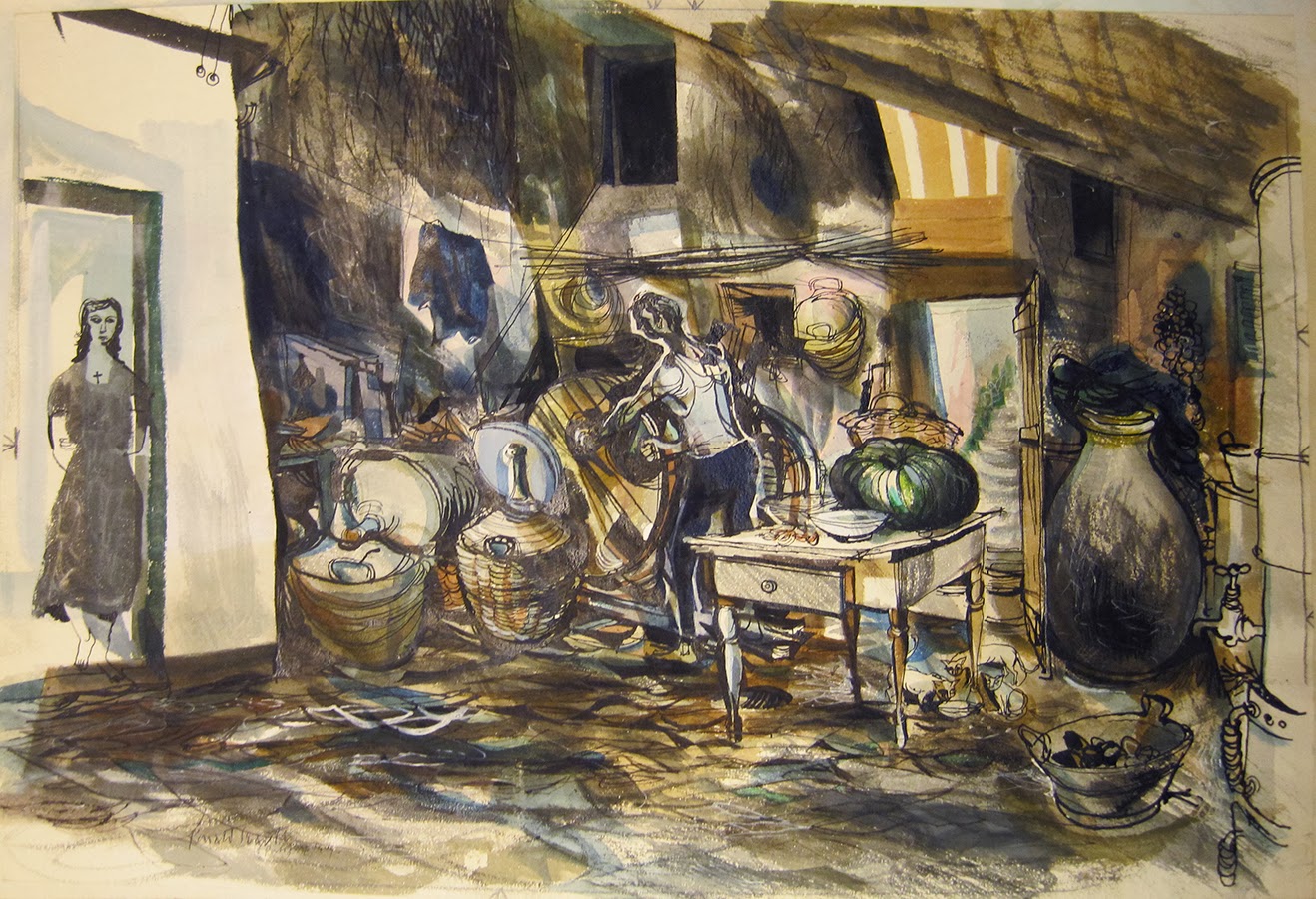 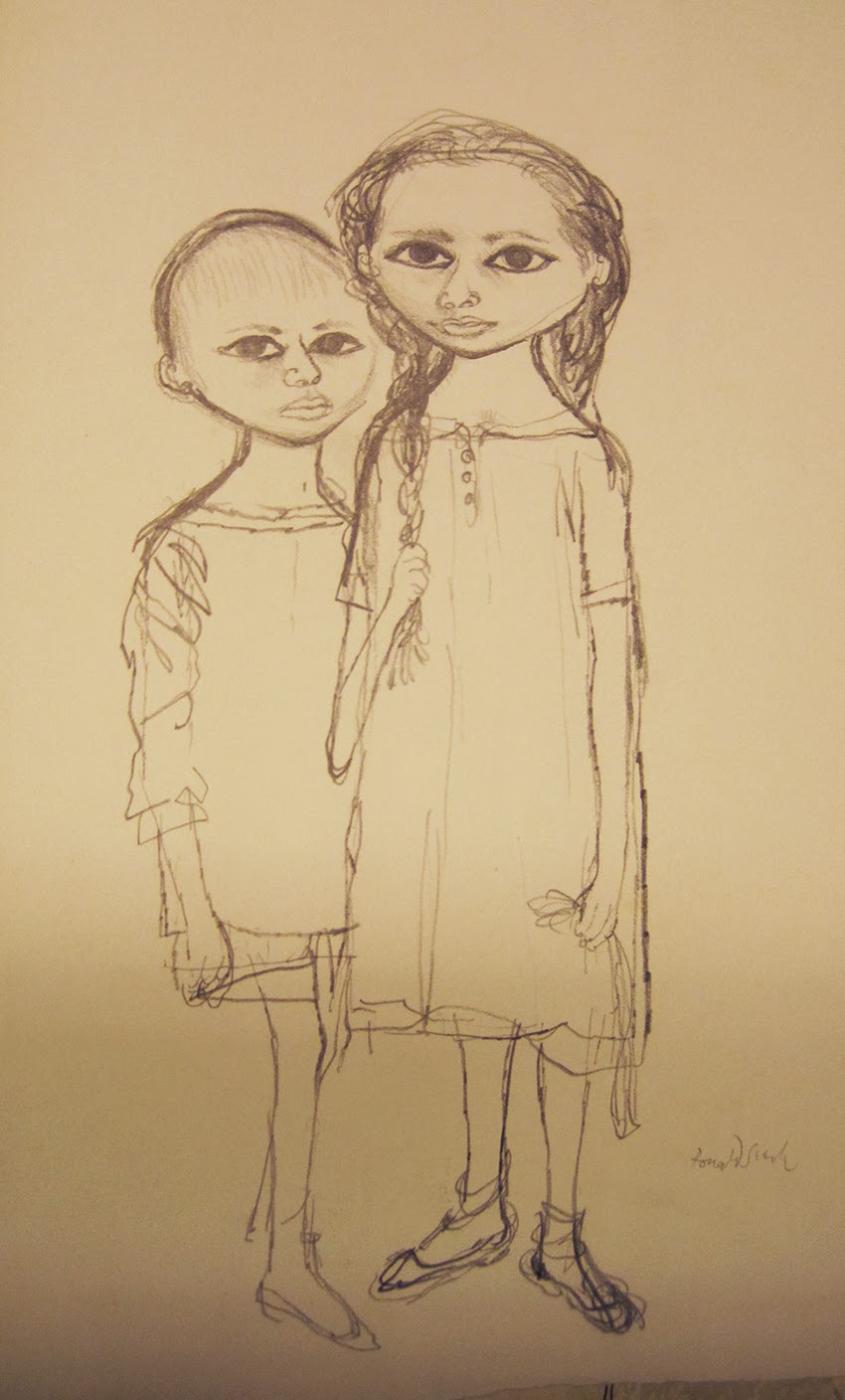 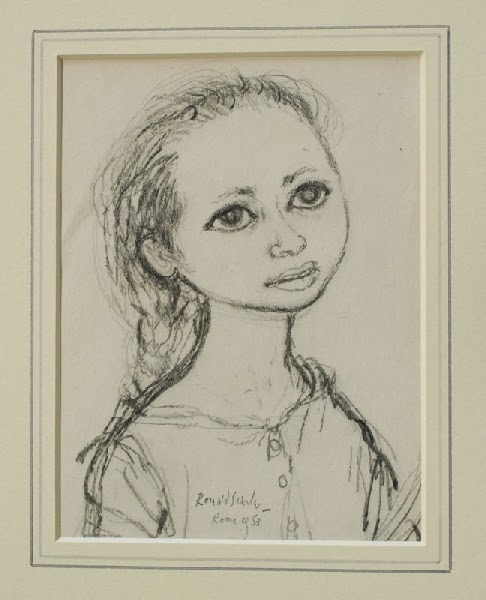 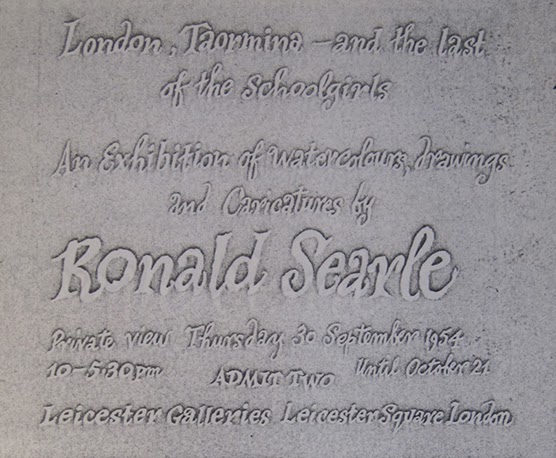 A contemporary review of the exhibition in the Spectator (15 Oct 1954) by M. H. Middleton critiqued Searle's new direction:


'I HAVE been wondering this week whether Ronald Searle is not the best comic draughts- man we have had in this country since Rowlandson. I dismiss from this context the Keenes and the Mays, and all those forced by their period to work within a literary framework in which the savagery of the caricature tradition is relaxed to a point where it practically ceases to exist. Who else is there? Searle's wit, as Rowlandson's, is in his line. -Rowlandson's typical line is the half-ellipse, and it conveys a fat, eighteenth- century chuckle; Searle's is the sharp, angular arrow-head, and it conveys a note of twentieth-century cruelty and hysteria. Ho is completely of our day. The pin-stripe trousers of his business men taper as ele- gantly as the legs of any contemporary chair; their triangular noses are as abstract as the tree-forms of Alan Reynolds or the metal sculptures of Lynn Chadwick; the phenomenal world is dislocated as surely as by any surrealist.
Here the ridiculous shades into the sinister. This is a world in which fairies get stuck to the flypaper; in which bearded myopics pay court to seductive female masks; in which eyes come of with the spectacles in front of them and feet are put outside the hotel bedroom to be cleaned. Herein perhaps lies a danger. If the comic draughts- man's particular brand of expressionism is not to degenerate into a habit, his characters into types, he must constantly be replenishing his stock by fresh observation. Ronald Searle's new exhibition at the Leicester Galleries shows him moving away from a central position, on the one hand to topo-graphical and portrait records, on the other to the invented visual fantasy largely created by Steinberg. When Steinberg's Italian in front of San Marco waves his hands in the air to describe the female form divine, and leaves her curves there in dotted line, he seems to be opening up a new dimension in comic drawing—but it is still one based, in the last analysis, upon observation. I hope Searle never strays too far from the real world, because I suspect that the quickness of his eye and the easy facility of his pen may in fact outlast his invention, and it will be a pity if their marriage should break up.' 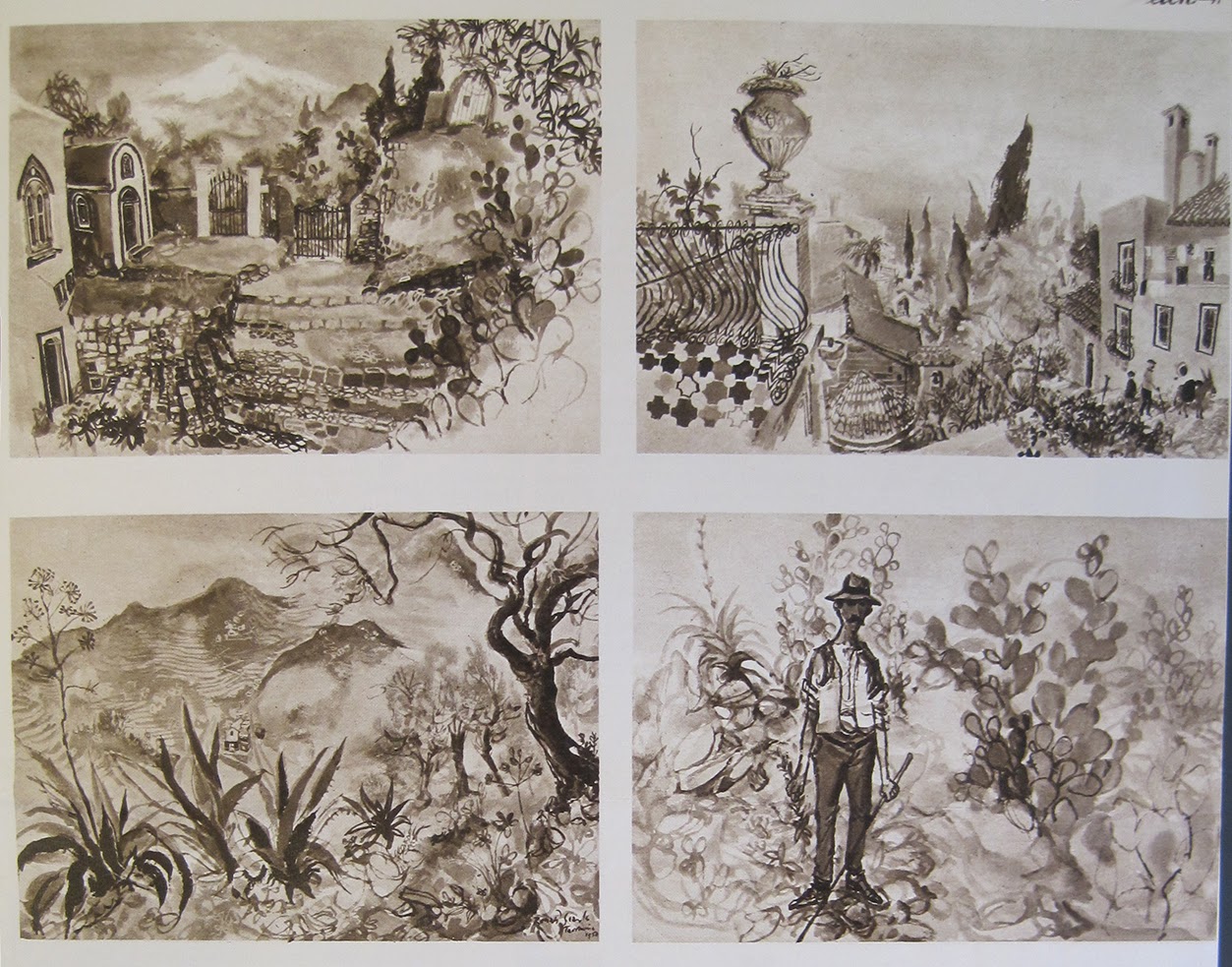 In an article entitled 'Strictly Not St. Trinian's' The Sketch magazine was more complimentary: 'The pictures on this page . . . were painted in the autumn of last year during a holiday in Taormina, with the exception of the clerical gentlemen, which was made in Rome. . . This last painting holiday in Italy is typical of his method of work. The experience comes first. In June and July, he painted nothing, but soaked in the sun, and visited museums and art galleries; his taste is catholic. Then he returned to Italy in September, spent a month dismally in bad weather, and began, in November, to wander about the place with an enormous sketch-block. . . he works in water-colour, gouache - in anything but oils.' 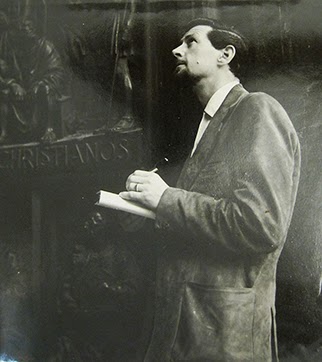 Searle later drew the Duomo in Milan for Fortune magazine 1962 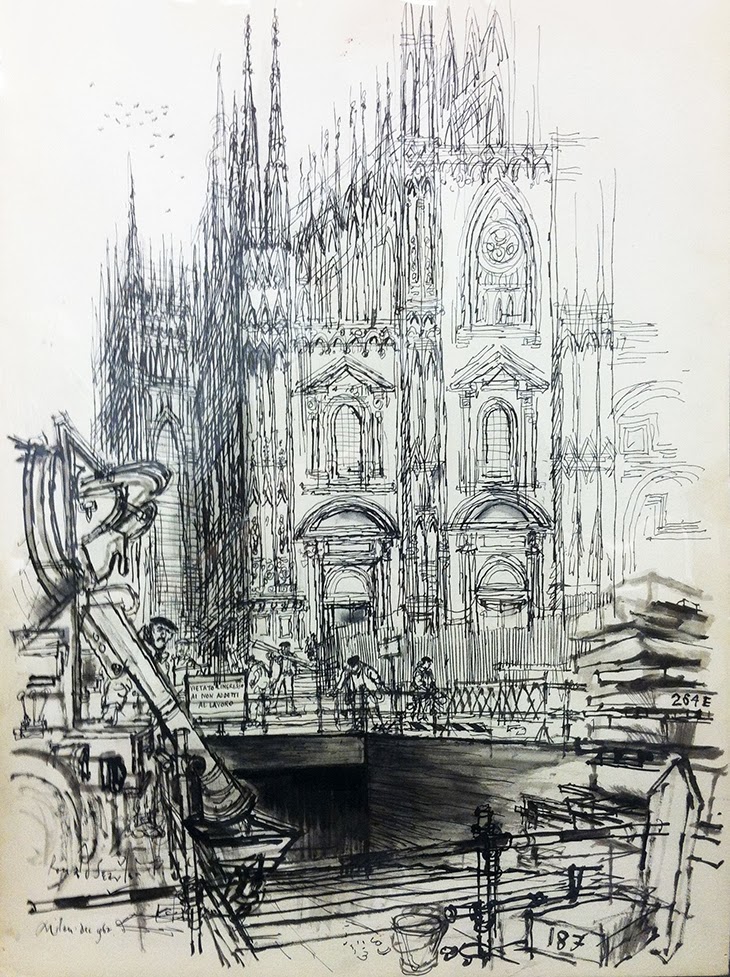 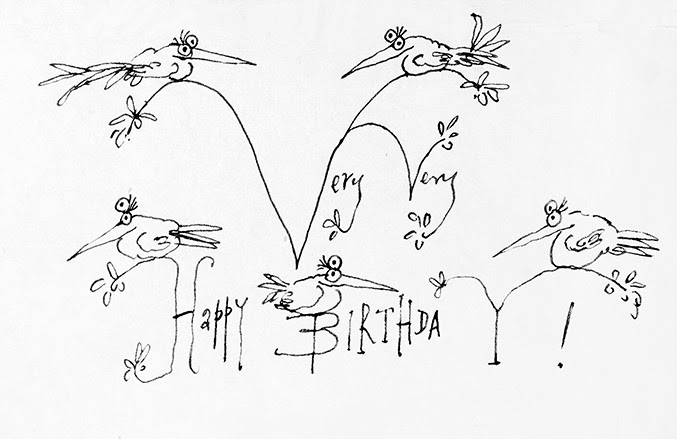