The exhibition celebrating the centenary of Ronald Searle's birth runs through the end of May 2021 at the Museum Wilhelm Busch, das Deutsche Museum für Karikatur und Zeichenkunst in Hanover, Germany
Posted by Matt Jones at 3:31 AM No comments:

Thee exhibition at the Wilhelm Busch mseum, Hanover celebrating the centenary of Searle's birth was delayed last year due to Covid but is now open through May. There's a focus on different aspects of Searle's career including animation.
Posted by Matt Jones at 4:39 PM No comments: 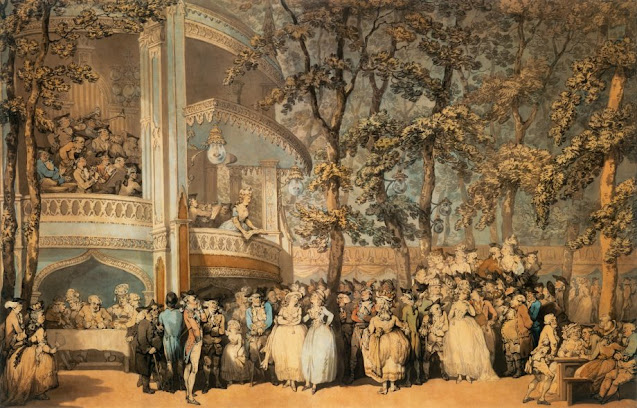 One of the 20th century's greatest cartoonists chose his favourite painting for Country Life.

This week, we delve into the Country Life archive for our My Favourite Painting column — back to 2010 when we spoke to cartoonist Ronald Searle as he approached his 90th birthday. Mr Searle died on December 30, 2011, at the age of 91.

‘Obsessed as I am with the magical, satirical pen line, I am very much aware of its roots – its forebears, those who created it with genius: Hogarth, Gillray, Rowlandson, Cruikshank. But if I must declare a favourite, I confess that I feel closest to Rowlandson.

‘That living line, that freshness of colour, that beautiful reflection of rural nature, all stirred in with a penetrating dissection of character. It all comes together beautifully in Vauxhall Gardens.’

The Soul of Searle 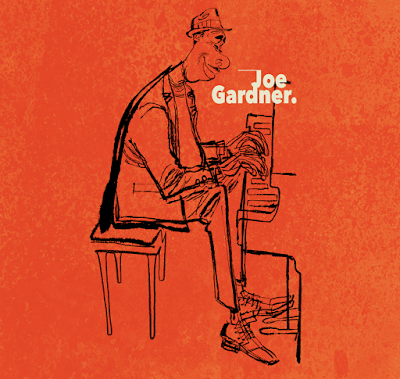 It's wonderful to see my old boss Pete Docter of Pixar Animation proclaiming Ronald Searle as a key influence on the design of his new film 'Soul'. In an August 2020 interview with 3D World magazine he is quoted:

The human world of the film marks a departure in the usual style of the studio from large, cartoon eyes to small eyes set in exaggerated features with long limbs, angular elbows and pointy feet - all hallmarks of Searle's style. 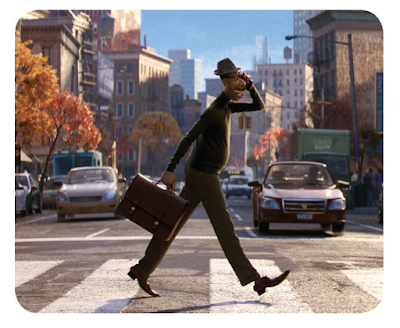 Pete, I heard that one of my favorite illustrators, Ronald Searle, was part of the inspiration for the look of the film. How did his work influence you?

PETE DOCTER: Pixar has always been fighting against the idea of a house style, but we do kind of have kind of have one. And so, Dana and I talked about why it be great to buck that somehow, so that the characters in this movie couldn't just be airlifted into "Toy Story" or "Finding Nemo" or one of the other films. We wanted to find our own design sense, and I think we succeeded. There are probably people that still will say, "Oh, it's very Pixar." But if you look at Carl from "Up," he's two heads tall; he's this big block. And Joe has, I think seven and a half or so, much closer to real human proportions. What we really pulled from Searle are those wonderfully stretched proportions, thin, spindly arms and legs, and kind of stockier bodies and he just fit really well with the look we were after. Jazz also played a huge influence in the design of New York City. It comes with its own visual sense, like those great album covers from the '60s. So, we tried to pull that into the movie as well. 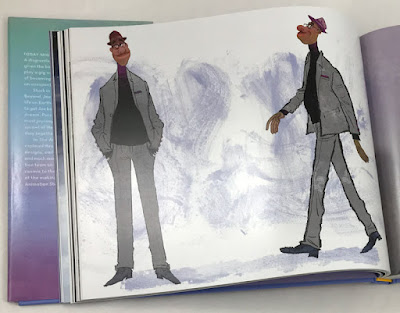 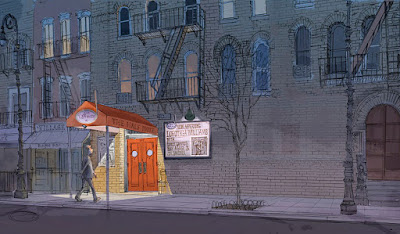 In a piece published at the Writing Studio the film-makers cite Searle and Disney's '101 Dalmatians' as inspiration. Searle, of course, was an un-credited source of inspiration on that film too consulting with the animators and production designer Ken Anderson. (see my post on that subject here)

Filmmakers’ approach to the film and the characters’ performances was inspired in part by two diverse influences: the art of English artist and satirical cartoonist Ronald Searle, and the animation from Disney’s 1961 animated classic “101 Dalmatians.” Says animation supervisor Jude Brownbill, “Searle and ‘101 Dalmatians’ influenced the look and feel of ‘Soul’ in almost every department—from the imperfect shape of buildings, furniture and props, to the number of folds on a characters’ clothing. For animation, Searle’s influence inspired bold and direct posing within clear compositions that lead the viewer’s eye through the scene. Studying ‘101 Dalmatians’ reinforced the importance of laying out one acting idea at a time and holding within key poses to allow important moments to be read more clearly.” 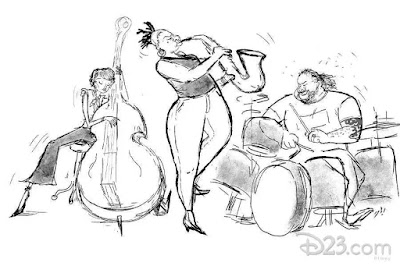 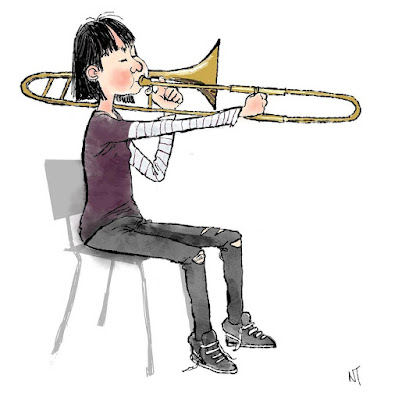 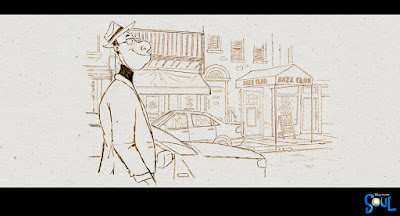 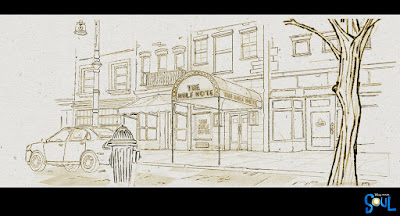 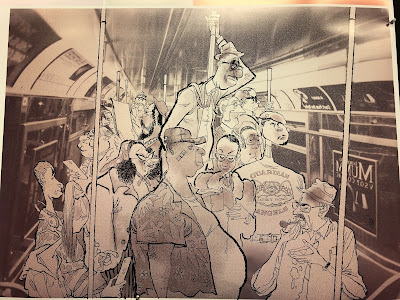 It’s so great that you noticed that. I haven’t actually discussed that with anybody when I was designing Joe. You have the character Roger in 101 Dalmatians and he is obviously a very classic, white character from a Disney film, but I really wanted to find a new character that could live on the way that character did, so there are certainly some influences there, but the artist I really narrowed my sights on was Searle. He had an incredible eye for representing people’s personalities and their interior persona onto a caricature in a wonderful, masterful way. He hadn’t done that many representations of people of color. Most of his work is of the white people surrounding him in England. We got inspiration from him, but had to find our own way, thinking of his shapes and angles, in creating the diverse characters in the New York cityscape. 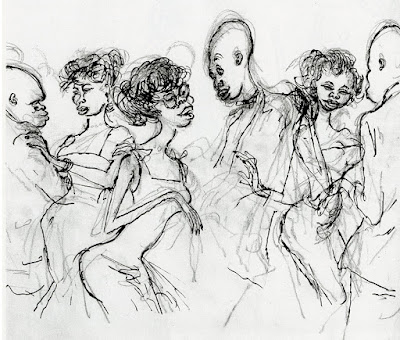 Although Searle made his reputation lampooning stuffy, white British people he did, in fact, portray Black characters often, most notably when he first visited America in the late fifties and explored NYC with his sketchbook. In an interview he professed his fascination with the city:

"in between dusk and dawn I am out gathering stuff for Punch.I gather that the first batch arrived safely
and that they are going to start off with one big drawing as a double-spread and follow it each week or
so with single pages or double spreads.  I'm expecting to get off tomorrow another packet . . . Central Park, Chinatown, Harlem, perhaps even the Bowery.  I may have to go back there for a bit more material. It's exhausting I must confess but I still enjoy drawing Manhattan almost as much as Paris." 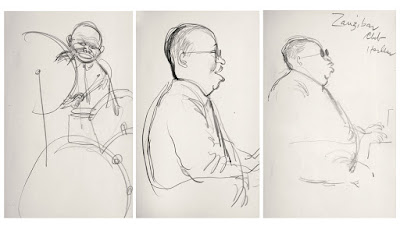 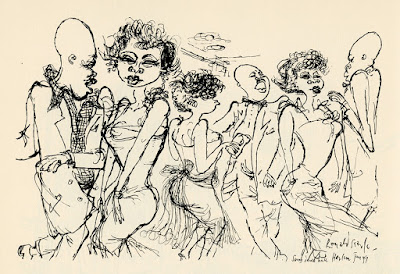 'Savoy Dance Hall, Harlem' June. 1957
Searle's first wife, Kaye Webb, related to her readers “The other night we ventured down to Harlem to a famous dance hall where we heard some wonderful jazz and saw the floor literally rocking with the enthusiasm of the dancers. After that we went on a tour
of Harlem nightclubs, finishing up in Count Basie’s bar eating southern fried chicken at three in the morning.” 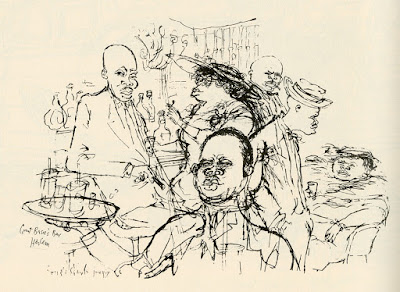 In 1960 Searle travelled to the south to cover the New Orleans jazz scene for HOLIDAY magazine. 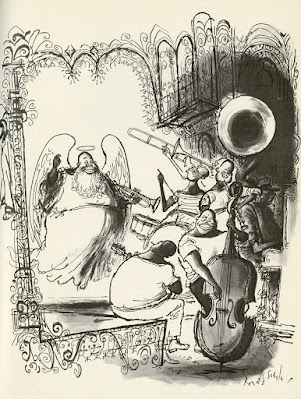 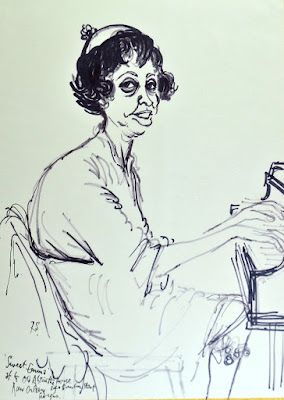 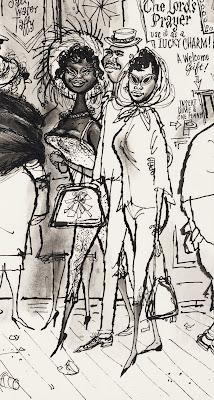 Of course the cat in the film has a direct correlation to Searle's cats. 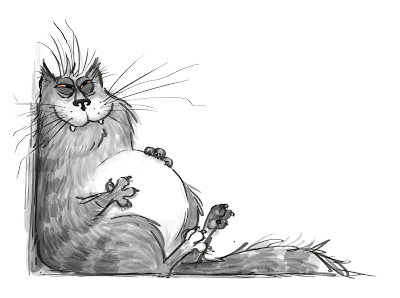 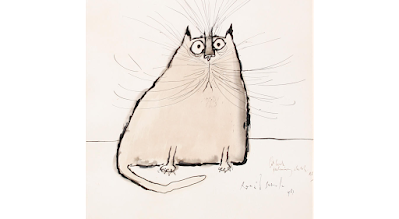 Posted by Matt Jones at 2:47 AM No comments:

Finally! a review of the book; the first since its publication five years ago. The media ignored it but Searle fans tell me they love it! It's still available at a bargain price these days.

This video shows how big this hefty tome is- a labor of love! Thanks to Bibliophile Books in the UK. 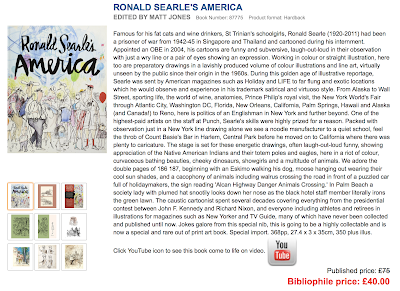 Posted by Matt Jones at 4:03 AM No comments:

Searle at 100 finally opens in Hannover! 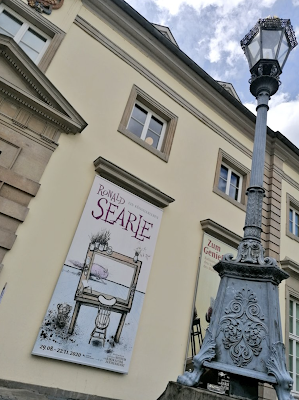 The exhibition to mark the centenary of Searle's birth (March 3) was supposed to open at the Wilhelm Busch Museum, Hanover in April but was postponed because of the pandemic. It opens this weekend.

'The exhibition draws on the abundance of this archive with the aim of providing visitors with intensive and exciting insights into a complex artistic personality along central geographic anchor points from Singapore to England and Germany to tour tours in France and two themed islands on "Animation" and "Private Life" To tell contemporary history.' 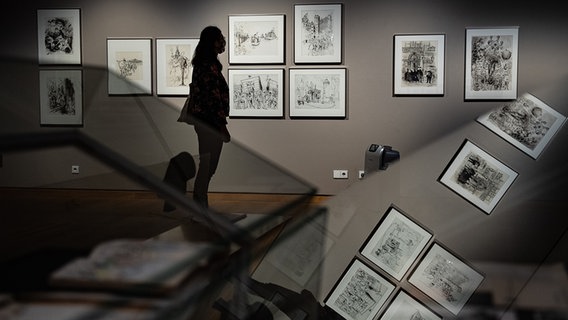 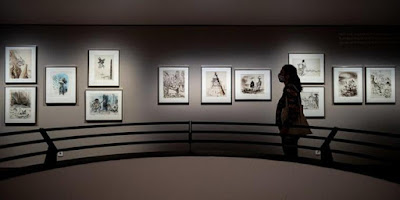 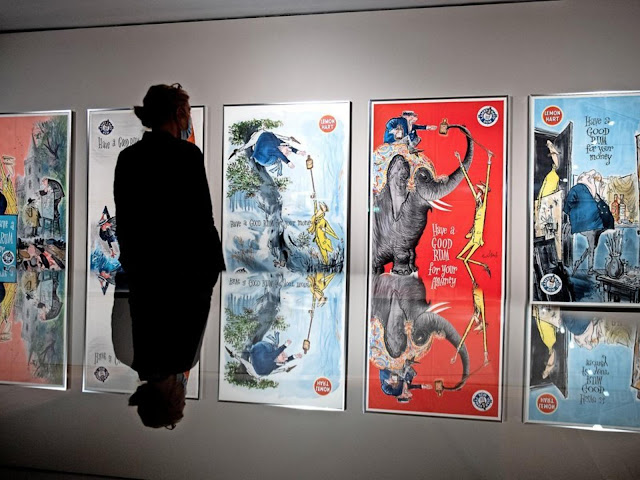 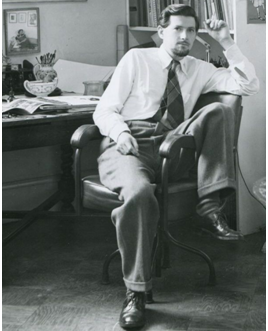 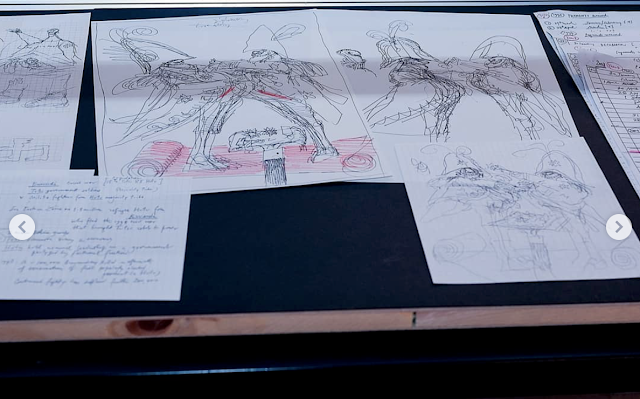 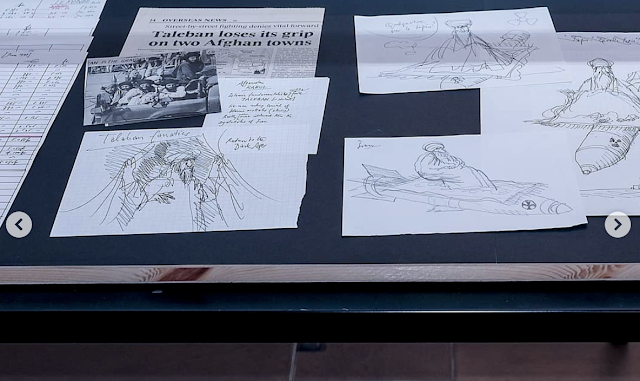 Posted by Matt Jones at 4:52 AM No comments: