Richard was a huge fan of Searle and helped me out with initial contacts for the 'Searle in America' exhibition in 2013. Here is a touching tribute written by Richard on his hero's death in 2011--

'I wrote this for Mike Cavna at Comic Riffs. For a little more, go here; for much, much more, go here (it's worth it). For almost too much, but to understand Searle more fully, go here.
For a long time Ronald Searle's work exerted a tidal pull on me, as it has at some point for a lot of cartoonists. The first time his stuff hit me hard was in 1978 when I got a big, lovely art book titled Ronald Searle, and it was like a window opened. His drawings were so potent and dense and alive with comic energy. His pen could do anything; it went curling and spiraling all over the paper, describing a world that was ugly, bitter, grotesque, hilarious and sometimes, briefly, quite sweet. It made me suddenly aware of how liquid ink is, how it skips and splotches and pools when it hits the paper. It was also obvious Searle had a deep appreciation for the history of the graphic arts and an awareness of how he fit into it. This was heady stuff for a generally clueless 20 year old semi-cartoonist to be exposed to, and it took a few years for me to put my own eyes back in my head.
Searle's style was so powerful that any other artist who mimicked its effects was pretty quickly overwhelmed by it and exposed as inferior. I think Searle himself was a little intimidated by his chops. There's a bit in his biography that tells of him taping the fingers of his drawing hand together to slow himself down and avoid becoming too facile. I've heard that he planned his work pretty carefully and his wiry, sprung lines were laid down with a lot more control than might be apparent.
Pat Oliphant said something to the effect that going through a Searle period is good for cartoonists, as long as they pull out of it before it's too late.  The best way out, of course, is to draw and draw some more, as far away from the source of inspiration as possible and under circumstances that don't allow for cheating (i.e., a deadline). It's hard but think I managed it.
But still, I'd give my right arm if I could draw like this-'

'Master penman Ronald Searle turns 90 today, and this is an update of a post from a coupla years ago. I'd meant to do something new, but I don't have the time now so it'll have to wait a few days.Below is Searle's illustration for the song "National Brotherhood Week" from the book Too Many Songs by Tom Lehrer With Not Enough Drawings by Ronald Searle. The original hangs in my dining room, just waiting to offend an unsuspecting diner. I think it's the only piece of art I've ever bought, and when I first unwrapped it I studied it for almost an hour, sometimes with my nose an inch from the paper. For a long time his style exerted a tidal pull on me, as it has at some point for a lot of cartoonists for over sixty years. Look at those hands! just clumps of fingers sprouting out of sleeves, and look at the way he's laid out the page in bendy chains of rectangles, look at how he's balanced the various line weights and the black sleeve and the curly hair, and look at all those gormless-looking faces...I've heard that Searle plans his work pretty carefully and his unmistakable wiry, sprung lines are laid down with a lot more control than might be apparent. His work always makes me aware of how liquid ink is, how it skips and splotches and pools when it hits the paper.  Though he used to draw not with ink, but with a kind of stain meant for I think furniture. He liked it because it aged interestingly into a greyish purple, and because it handled differently than regular ink. They don't make that brand of stain anymore, and he's drawn with regular ink for years, and better than just about anyone else.Happy Birthday to Mr. Searle, and I hope he's well and working in his converted windmill in the French countryside.' 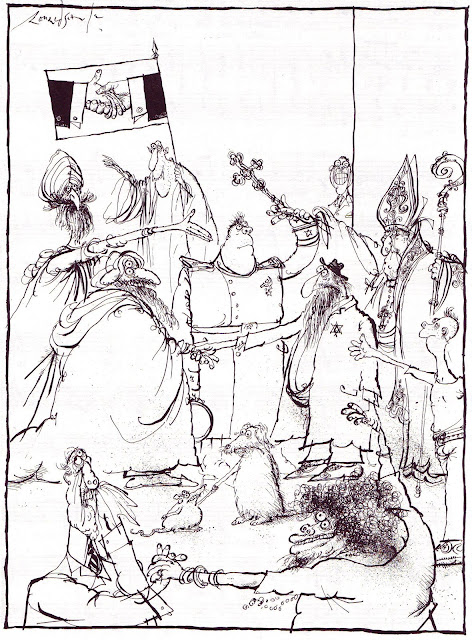 The Art of Richard Thompson from GVI on Vimeo.
Posted by Matt Jones at 7:14 PM