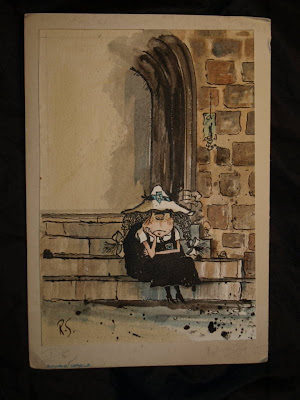 This purported Searle 'original' is up for auction on Ebay at the moment. Looks like a fake to me but it already has bids totalling 310 pounds.

In fairness the website does make the following disclaimer:

"A delightful and very interesting pen and watercolour on paper laid on board of a St Trinian's schoolgirl. Signed with initials R.S. and inscribed in pen on the board "Ronald Searle". My local auctioneer has decided that without provenance they would have to catalogue this as either "after Ronald Searle" or possibly "Attributed to Ronald Searle" - hence my decision to sell this on Ebay with a low starting price and NO reserve.

This was bought at a market in Brighton as part of a folder of mixed art work which included a number of pen and ink drawings by different artists (none of the others unfortunately by such well listed artists as this one)." 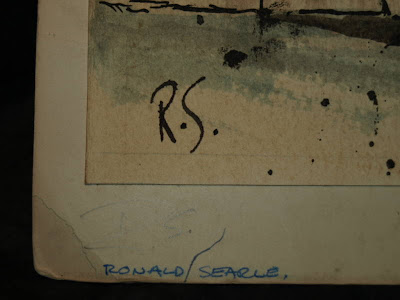 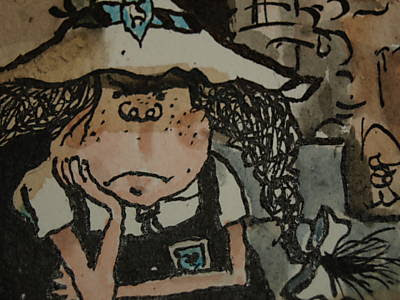 The hair seems rather clumsily defined-Searle's curls are much tighter than that. That area above where the cheek is resting on the hand is quite poorly handled.

It's most likely a piece made for fun with perhaps the character & its pose copied from Searle. Even the ink splatter effect lacks the 'control' that Searle had. What do you think?


Contributor Stephen Nadler sent in a scan of the original St. Trinian's cartoon by Searle for comparison. See his analysis in the comments section. 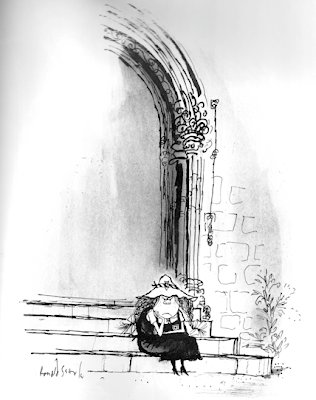 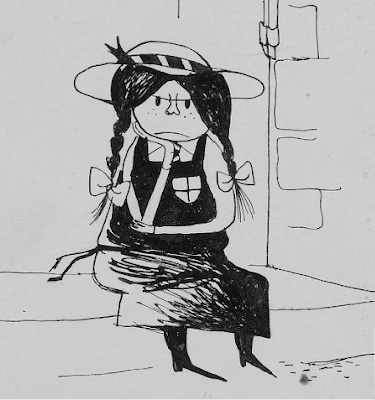 I have several examples where Searle returned to a gag years later or re-worked the same drawing. Should make for an interesting post at a later date. I also have some video clips where Searle based animated shorts on earlier print cartoons. 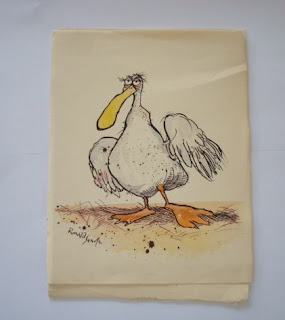 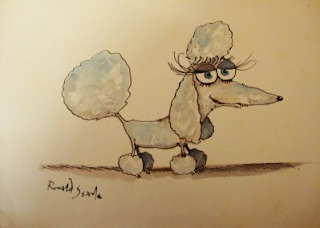 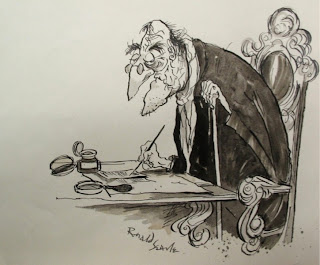 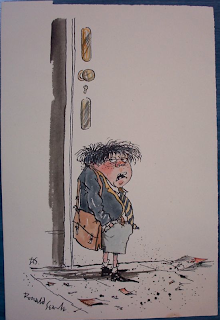 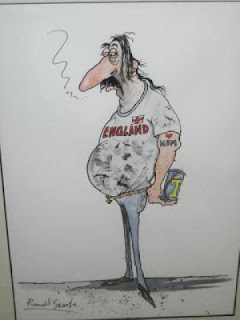 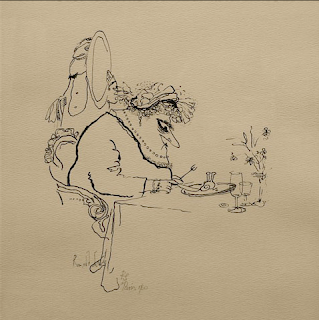 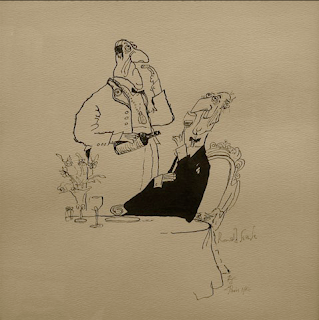 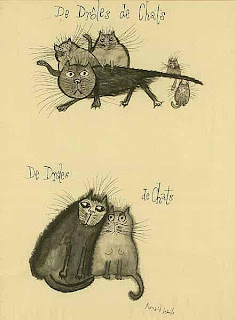 Not Searle at all. One of dozens of much later imitators.

This drawing has been probably made by Adrian Saich...

In 2003 Adrian Saich tried to sell me two forgeries by Saul Steinberg and he has sold on Ebay forgeries by Ronald Searle, Keith Haring,... His Ebay id was capp2000 and MAYBE now is adrian money.

Definitely not a Searle, all the magic is missing. This one is way too clumsy.
Searle's drawings, no matter how rough they are, always feel like each line belongs exactly where it is, each stroke of hair looks accidental but perfect the same time.
Here you can clearly see someone trying to imitate that and utterly failing.
The seller is very clever, not really breaking the law, knowing that there are always some people out there who can't tell the difference.

The 1947 St. Trinian's drawing from which this eBay watercolor is apparently copied appears in Ronald Searle's Golden Oldies on page 131, and in other places. I'm emailing a scan to Matt. The published black-and-white Searle drawing appears clean and crisp. It's also funny. The diminutive schoolgirl by the huge doorway creates a contrast in scale that adds to the humor. The figure and the steps in the color eBay version seem to me to be slavish copies. The back of the St. Trinian's girl has become quite shapeless. Here the scale of the doorway is greatly diminished. The watercolor painting seems sloppy and I think the artist is deliberately shying away from the ornate architectural details of the doorway. To my eye, the india ink has become runny when wet, a problem I've often encountered but I've never know it to be a problem for Searle. Searle, like most cartoonists, will make several variations on any given idea, but I feel pretty comfortable now in calling this one a forgery.

For £1700 you can buy a real Searle from an trustworthy dealer. Why would anyone bid that much on ebay especially with a warning that it might be a fake (and a bad one on top of that).

Incredible eh? The price jumped at the last minute. Uli's right - a nice REAL original could be bought for that. Makes me think even this 'buyer' could be a fake too!

Ya looks like a forgery...or hommage...I do the same thing all the time, but don't pass it off as someone elses...

Hi I have just come across this blog. Why didn't one of you experts email me and let me know your expert opinion? I have just received a letter from Ronald Searle himself telling me this is a fake (unfortunately posted to the wrong address so only arrived yesterday)and I now will not be selling this picture (although very tempted to sell the picture and the letter that goes with it -but what would stop someone passing it on as genuine?)

The "winning bidder" was in fact a fake too and never paid but left me negative feedback subsequently removed by Ebay).


I never knowingly sell fakes and I am careful with attributions - I took this picture to my local auction house - and they were not sure whether it was genuine or not. I thought my description was honest - and yes I was extremely surprised this was bid up so much.

I have never traded on Ebay under any other name and I use my real name too.

I keep hearing one or the other seller frustrated from eBay because they pulled their auction listing. It is very easy to violate an eBay listing guideline without knowing, the first you’ll learn about it is when you receive an email from eBay. http://www.infyecommercesolution.com/

There are a number of drawings also with smaller auction houses in the UK recently, many of them described as "signed Ronald Searle" not "by Ronald Searle".

Currently, there is another St. Trinians girl in a similar pose as the one presented here: Auction is at Sandwich Auction Rooms, date June 10th, Lot #212

Any comments from the combined wisdom here?