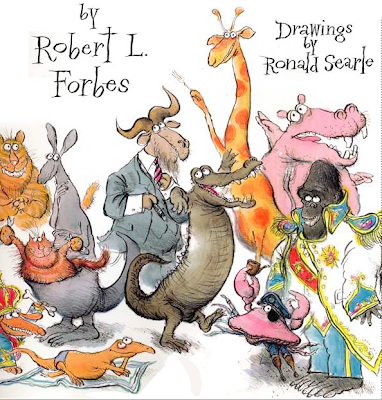 The Forbes Galleries, NYC is pleased to present 'Beastly Feasts! A Mischievous Menagerie in Rhyme' in celebration of the release of Robert Forbes’ poetry book of the same title. The exhibition features all forty wildly playful rhymes about animals naughty and nice, along with the original charmingly intricate drawings by master caricaturist Ronald Searle.
On view in the Picture Gallery, November 21 — January 12, 2008 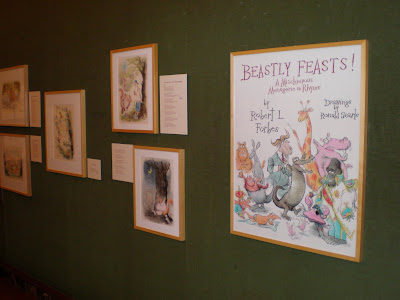 'Beastly Feasts! A Mischievous Menagerie in Rhyme', Overlook Duckworth, New York, 2007, is available at local bookstores and at www.amazon.com as well as other online booksellers. 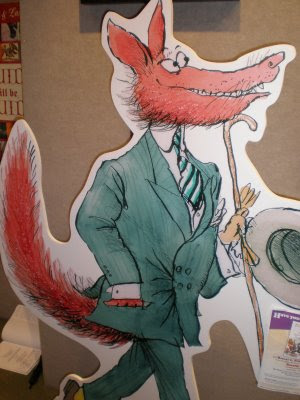 RONALD SEARLE: A LIFETIME OF DRAWING 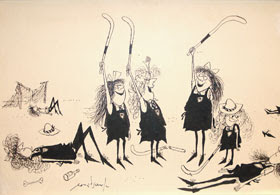 Is there a more trenchant yet sympathetic observer of mankind than Ronald Searle? His work is backed up by the unerring eye of one who has tasted life at its worst, as a P.O.W. of the Japanese during World War II. Searle survived and moved on, never bitter, to become one of the greatest caricaturists in history, ranked with Hans Holbein the Younger, Thomas Rowlandson, Honoré Daumier and his favorite, Annibale Carracci.

His wit is infused with compassion and a sense of the ridiculous; he brings a visceral delight to life and finds humor, silliness, pathos and absurdity in everything. He takes pleasure in his characters: what they do, what they look like, what they desire. Above all, there is joy, never arrogance or flippant irony, that ennui-filled detachment so much in vogue today.

The exhibition, culled from the collection of Robert and Lydia Forbes, spans Searle’s wide-ranging career, from his drawings in a Japanese POW camp, to his early success as a magazine and book illustrator, to the enormously popular series of “St. Trinian’s” drawings, to his work for movies and businesses, to his famous drawings of cats.

'A Celebration of Colorful Critters' 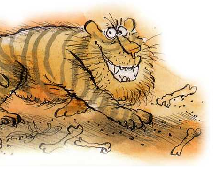 A motorcycle-riding snake, tea-drinking gnus and a red carpet-strolling leopard are some of the eccentric creatures Robert L. Forbes introduces in Beastly Feasts! A Mischievous Menagerie in Rhyme, which The Overlook Press will publish next month. Accompanying Forbes’s poems are fanciful illustrations by British artist Ronald Searle, whose many books include Searle’s Cats and Cat O’Nine Tales and whose art has appeared in magazines and newspapers worldwide.

This is the first children’s book by Forbes, who has pursued several other careers. He is v-p of Forbes Inc. and president of ForbesLife magazine, and has authored numerous articles on food and travel, produced documentary films and coauthored Toy Boats 1870–1955: A Pictorial History. Additionally, he spends time across the Atlantic, as the proprietor of an organic vineyard in the Languedoc region of France. 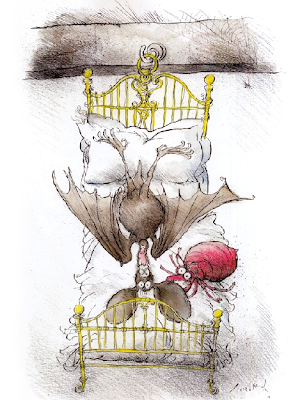 What inspired him to publish a book of children’s poems? “My love of animals and my love of poetry,” Forbes answers. “My wife and I like to go to the zoo and see the wonders of nature there and I had written a number of poems based on those visits. And some of the poems I wrote for the book are based on other experiences. ‘Spike the Biker,’ for instance. I spent many days and thousands of miles riding on motorcycles with my dad [Malcolm S. Forbes] and I began thinking, ‘What is the most unlikely critter to get on a bike?’ and a snake came to mind.”

Forbes is a long-time fan of Searle, who has contributed illustrations to ForbesLife. “I thought there was no one better to illustrate my poems, and imagine my absolute delight when he agreed to. He is now 87 and at the very top of his form. Each time I send off poems to him and he returns a batch of drawings I feel like a kid at Christmas-time.”

The project landed at Overlook thanks to what he terms a “lucky connection.” A friend of his, Maria B. Campbell, who heads a scouting agency, is a friend of Peter Mayer, Overlook’s publisher and CEO, who acquired the book. After the original editor left the company, Aaron Schlechter inherited the task of editing Beastly Feasts! The book, Schlechter says, “came into place very smoothly. Bob has a passion for poetry, knows quite a bit about publishing and was a pleasure to work with.” 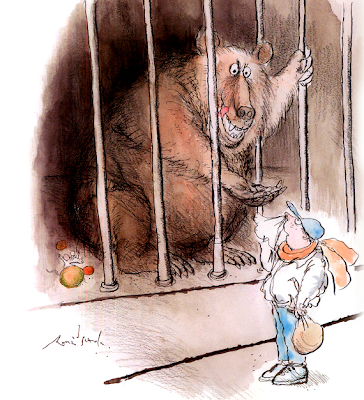 The most challenging part of the project, recalls the editor, was procuring good reproductions of Searle’s art, which is created using numerous media, including pencil, markers, crayon and liquid paper. “It’s sometimes hard to get good color matches when you’re working with Wite-Out,” Schlechter says. “We had to go back and scan the art multiple times to pick up all the details.”

Searle’s original artwork for Beastly Feasts! will be on display at the Forbes Gallery on lower Fifth Avenue from September 8–29 and at the Chris Beetles Gallery in London from October 12–31. At the end of September, Forbes will embark on a five-city tour to promote the book.

The prolific poet has written enough animal poems (which Searle has already illustrated) to fill at least one sequel to Beastly Feasts! and he expects there might be additional children’s books in his future. “I’m not exactly sure what other books I might do,” he muses, “but I know I will always use poetry and rhyme to get where I want to go.” 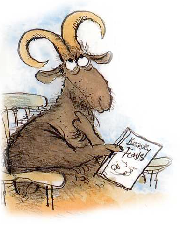 As much coffee-table conversation piece as a collection for children, this oversize volume allocates each of 40 spreads to a different animal, portrayed in tepid verse by Forbes and in first-rate cartoons by Searle. Forbes, the president of ForbesLife magazine, leans on puns ”and then the hippo potty must!”), interest in appearance (“An uptown leopard named Lottie / All the guys consider a hottie”) and grisly demises (“A naughty lad, he took no care, and in the end did feed the bear— / an accident”). Most of the animals are adults, their concerns those of middle age: weight gain, stale marriages, professional advancement. The verse can scan poorly or seem tired (“Her neck is very, very tall / So tall she towers o'er us all” says Forbes of—what else?—a giraffe). Satirical cartoonist Searle (Searle's Cats) redeems the wacky menagerie. Punctuating pale watercolor wash with inky black lines and splotches, he draws Forbes's hippopotamus hurrying goggle-eyed and cross-legged with urgency to the nearest bathroom, and Lottie the leopard strutting like Cyd Charisse down a red carpet. The aforesaid “naughty lad,” pale and pimply, stands before the bear cage, incapable of interpreting the bear's menacing grin while a tiny, anxious mouse in the corner waves its paws in alarm. (In a child-friendly touch, the mouse lurks in each picture.) For die-hard Searle fans. Ages 6-up. (Sept.) 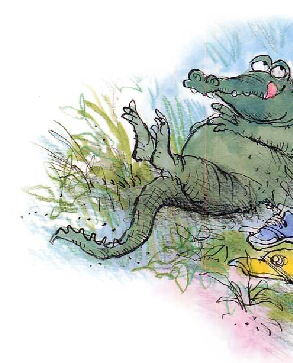 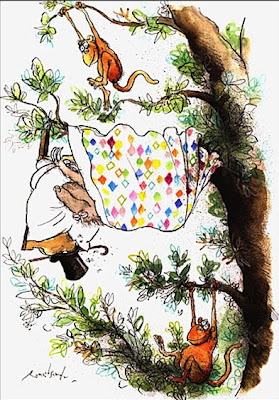 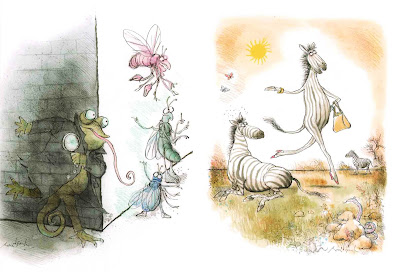 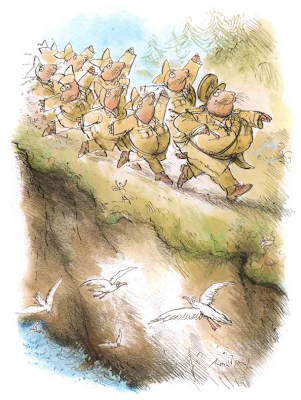 Wow! Just saw the Searle show at the Forbes Gallery...waaaay more stuff than just the Beastly Feast stuff...Lemon Hart work, Winespeak, Slightly Foxed, etc...I will go back many times while the show is up...If you are in the area I strongly recommend it!

Joe, you're lucky to be able to see that show-multiple times too! I've seen a lot of that material at the Beetles Gallery in London but I still I wish I could get to NYC.

Its up till the 12th (?) of January...I work 5 minutes from the Gallery so I think lunch-breaks will be spent there...there are some pieces that are my favorites...RS has been my biggest inspiration...I love seeing the mistakes u don't see in the final printed piece, makes me feel better about my stuff....anyway Merry Christmas!