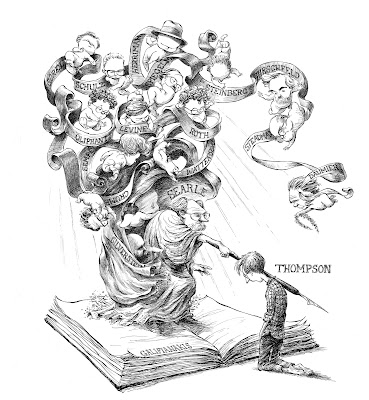 Cartoonist Nick Galifiniakis is a huge Searle fan and created this fantastic tribute to his friend Richard Thompson and all the great cartoonists who came before him. He explains the piece thus:

Less than a year ago, I created this drawing as a tribute to my now shaved-head, brain-electrodes implanted pal, Richard Thompson, a genius who can now also jump-start my car.

The piece was for the very worthy book by Chris Sparks, "Team Cul de Sac." Proceeds go to fight Parkinson's.

The concept (abbreviated so I don't bore you) is simple: the greatest cartoonist that ever lived, Ronald Searle, surrounded by a pantheon of great illustrators, is anointing his heir, Richard Thompson.

If you don't see your favorite cartoonist up there, don't worry, he or she is represented by the anonymous cherub touching Searle's shoulder.

(Strange, sad, side note: Ronald Searle passed away a month after I made this picture. My heart is still broken and daily I tell myself that, cosmically, I had nothing to do with accelerating the death my 92 year old hero)

So here is, "The Anointing of the Heir":

A beautiful tribute I'm sure you'll agree. Richard  Thompson is an accomplished cartoonist and creator of the popular Cul de Sac strip-he is bravely battling Parkinson's Disease- see his blog post on drawing while being operated on-you can't keep a good cartoonist down!