More on the summer Searle exhibition

A selling show of 50 pictures by the world’s most famous living illustrator-cartoonist.

Famous for his illustrations from Lilliput and Molesworth and his St Trinian’s girls’ school horrors, the exhibition will contain original artwork from his early period as well as Punch cartoons from the 1950s-1970s; political reportage; film, literature and theatrical portraiture and cartoons from Le Monde and the New Yorker.

This joint venture is the fourth annual collaboration, following on from the success of previous shows - Quentin Blake, William Heath Robinson and the greatest pictures from the Golden Age of children’s book illustration. 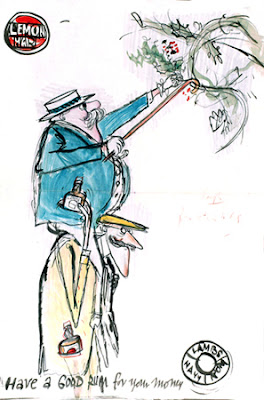 Included in the show is this rare preliminary drawing for the LEMON HART Rum ad illustrations.

Here's a recent article published in the Yorkshire Post to coincide with the exhibition;


'How Searle escaped being pigeonholed in England' By Sarah Freeman


Ronald Searle should be a national treasure. But while he is regularly dubbed the grandfather of contemporary cartoons, since becoming a household name in the 1950s, the artist has proved something of an enigma.
It is partly his own doing. Never feeling entirely comfortable with the attention which went with his status, 30 years ago Searle moved to France, leaving his work to do the talking.

Rarely persuaded to give interviews, he admits that his silence has led most people in Britain to believe he died some years ago. And while reports of his death may have been greatly exaggerated, they have given him a certain amount of freedom.
"People like putting you in a pigeonhole, and as far as the English are concerned, you are locked in it forever," he once said.
"All the mystery that surrounds me over why I left England is actually very simple. I felt stifled. I had been churning it out for myself at night and for other people by day, and I was tired of hearing 'I want, I want, I want'."

While he may have been overshadowed in the country of his birth, where cartoonists are often seen as the art world's second-class citizens, an exhibition and sale of Searle's work, which begins next week at Nunnington Hall, near Helmsley, hopes to go some way in redressing the balance.
The event at the North Yorkshire stately home is a joint project with the Chris Beetles Gallery, in London, and will include about 60 works by the man who started his career as a solicitor's clerk.
Enrolling in evening classes, Searle, the son of a railwayman, found his distinctive style after enlisting in the Royal Engineers at the outbreak of the Second World War. Posted to Kirkcudbright, he encountered evacuees from St Trinnean's, a progressive girls' school in Edinburgh, and with just the slightest change of spelling, the first of his famous cartoons was published in Lilliput in October 1941.

By the time he saw a copy of the magazine, Searle had very little to smile about. With his brigade sent to Singapore, he, along with more 100,000 other Allied troops, were captured by the Japanese, incarcerated in Changi jail and later sent to work on the building of notorious Siam-Burma railway.
The events in Singapore would later provide the inspiration for Pierre Boulle's novel and the classic film, Bridge on the River Kwai, but the romanticised version was far removed from Searle's own experiences, which he recorded in hundreds of drawings.
"It is nonsense and absolute rubbish," he said of the Oscar-winning film.
" It's a romantic novel, a Frenchman's idea of how the British behave. A sort of jolly good chaps and let's build a bridge scenario. The horror, the misery, the blackness changed my attitude to all things, including humour."

When he returned from the war, Searle exhibited his prisoner-of-war pictures at the Cambridge School of Art, and the following year, published a selection in Forty Drawings. The exhibition and volume established his reputation as one of Britain's most powerful draughtsman, and led to several opportunities to record the atmosphere of post-war Europe.
His familiarly audacious style developed through his early contributions to Punch and crystallised in his comic collection, The Female Approach, in 1949. Throughout the 1950s, he produced a large variety of illustrations which together seemed to present a guide to life in Britain.

However, as his popularity increased, so did the demands on his time. Producing cartoons for numerous newspapers and magazines, supplying animation for Walt Disney, creating film posters and with his work a regular accompaniment to theatre reviews, the artist, who would influence everyone from Gerald Scarfe to Simpsons creator Matt Groening, was in danger of burning out.

While many were surprised by his move to Paris in 1961, for Searle, it offered a fresh start, resulting in several solo shows, including major exhibitions at the prestigious institutions of the Bibliotheque Nationale and the Berlin-Dahlem Museum.
He also reached a new audience with his contributions to film and television, most notably Those Magnificent Men in Their Flying Machines.

But he has since sought out the solitude of rural France. "I'm not a public person," he has said. "I don't like it all. My work is public, that's splendid, but I don't want to be swallowed behind it. In the 1950s, I was engulfed." 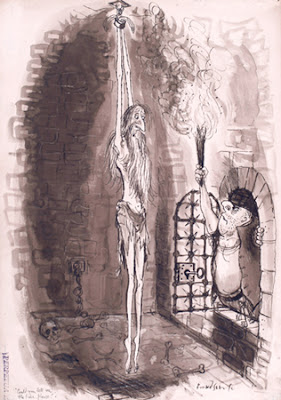 
Drawn in humour
By Charles Hutchinson


The distinctive Searle style, from light, top, to darker
The sound of laughter emanates from the exhibition rooms at Nunnington Hall, and yet Ronald Searle's cartoons are often rimmed with darkness.

"The horror, the misery, the blackness, changed my attitude to all things, including humour," says Searle in a note at the show, as he recalls the impact of his incarceration in Changi Gaol, Singapore, as a Japanese prisoner of war.

Now 87, Searle prefers not to talk about his artwork - he was not available for interviews from his home in rural France - reasoning that he is "not a public person".

"I don't like it all. My work is public, that's splendid, but I don't want to be swallowed behind it," he says in another note.

Fair enough. Let the focus fall on his illustrations and cartoons in an exhibition showing only at Nunnington.

The exhibition, on the upper floor at Nunnington, consists of about 60 works and is being put on in association with Chris Beetles Gallery in London.

Nunnington Hall property manager Simon Lee says: "We're really pleased to be showcasing the work of one of the greatest names in illustration and cartoons at Nunnington this summer. There are few people that do not instantly recognise Searle's style and here is a chance to buy an original piece of his work.

"With such a long career behind him, I hope this exhibition will bring back many memories for visitors, and make people smile."

Indeed it does, although those memories are as much of what is not on show as what is: there are no St Trinian's originals, as more than one visitor commented, but those are so familiar that it is fascinating instead to see his work for Punch, medical magazines and various newspapers.

Has anyone ever made more expressive eyes simply from a black dot in a pool of white, and whatever happened to all those wonderful English walrus moustaches? Searle has saved them for ever: the English character personified, absurdities and all.
Posted by Matt Jones at 1:07 PM No comments: