Somebody wrote to me recently enquiring whether it was true that Searle drew with a 'bamboo pen'.
There's an interesting thread on Searle's use of the bamboo pen over at the Illustration Art blog, suggesting Searle first dicovered this tool as a prisoner of the Japanese during WW11.  The variety of mark-making in Searle's work indicates that he uses a variety of tools, nibs, fountain pens brushes etc.
Artists often wonder how did Searle achieve those marvellous results- what tool did he use? The answer is probably all of them.  In this photo below from the display case at the Cartoon Museum's Searle exhibition we can see the different media he used, including a bamboo pen, a variety of dip pens, the wood stain used as ink early on & the famous Mont Blanc fountain pen. 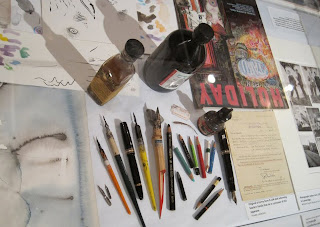 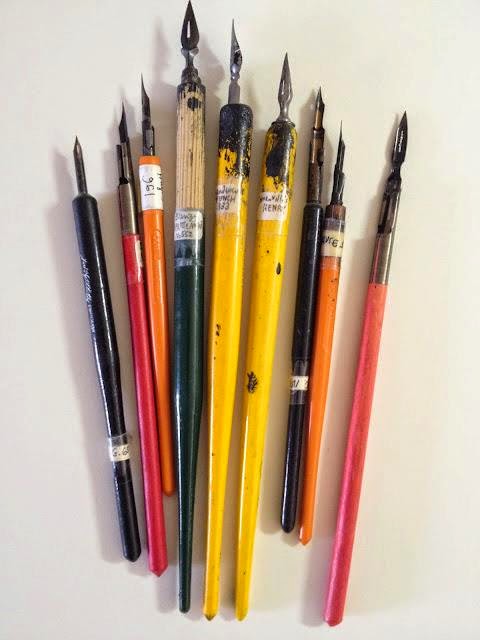 Ronald Searle at the Cartoon Museum, by Louis Hellman

To mark Ronald Searle’s 90th birthday, the Cartoon Museum is showing a retrospective of his work. Here, Louis Hellman examines Searle’s portrayals of architecture and art
Cartoonists invariably need to include buildings or townscapes in their drawings and do it with varying degrees of understanding. Some, such as Giles or Steve Bell, generally get the details right, but how often have we seen particularly inaccurate representations of the Millennium Dome or the Gherkin?

Ronald Searle, arguably the greatest 20th-century English cartoonist and still going at 90, worked as an architectural draughtsman for the Royal Engineers at the outbreak of the Second World War. His depictions of buildings range from accurate representations to surreal fantasies and his architecture, whether real or invented, often complements the drawing style of his neo-rococo figures.

Searle was incarcerated in a Japanese prison camp during the war, where he drew the surrounding atrocities on scraps of paper scavenged by other prisoners. After the war, he achieved popularity with his creation of the subversive St Trinian’s schoolgirls, and he subsequently found international fame through illustration, graphic reportage and cover design.

Searle, the cartoonists’ cartoonist, has influenced practically everybody, whether they are aware of it or not. He developed his mature style in the 1950s along with his contemporaries Saul Steinberg, André François and George Grosz, with each of whom he has clear affinities. Searle’s brilliant impromptu draughtsmanship, always searching, unfolding, exploring and rooted in the 1950s and the English tradition, is deceptively whimsical at first sight. But the superficial attractiveness conceals the barb of satire or disapproval, in contrast to today’s more in-your-face satirists.

Born in Cambridge, Searle has lived in France since 1961, where he is appreciated, exhibited and recognised as an important artist. Rightly so.

Entrance to Old Medina, Casablanca, Morocco, January 1965This scene was painted for the US magazine Holiday and exhibited at the Bibliothèque Nationale de France in Paris. It exemplifies Searle’s free pen-and-wash reportage approach, combining straight representations of buildings with caricatured people.

Al Fresco, 1977
Searle invents a spidery classicism as a setting for his rococo surrealism and naughty nudes in a superb composition. As Russell Davies observes in his 1990 biography of Searle: ‘Within even the craziest of his drawings, the beautiful correctness of observed reality still ruled. He was not making the world look funny, but experiencing it as funny; it was less a style than a psychological condition.’ Note the flicked blots, a technique possibly borrowed from upstart Ralph Steadman. Searle’s original 1950s style was clearly tempered by the new graphics.

New York, circa 1957When Searle first visited New York (he would later be published in the New Yorker) he stayed in a hotel next to the United Nations building.
His window offered fascinating views of nearby skyscrapers and what the locals got up to on the rooftops below. He produced a number of so-called ‘on the spot’ studies, which he claims ‘look elaborate but in fact they don’t take all that long to draw.’ Oh, really! But did those post-modern-ish blocks actually exist or were they Searlian inventions?

A Bigger Slash: Hommage to David Hockney, 1984This lithograph refers to David Hockney’s famous A Bigger Splash (1967), one of a series of poolside paintings executed when the artist lived in California. But is it a ‘hommage’ or a piss-take prequel? Are these other artists raining on Hockney’s paradise or members of the philistine public? And where has the diver come from? Best not to analyse, it’s just very funny.

The Ruhr, 1963Another example of Searle’s reportage drawings as he toured industrial Europe in the 1960s for Holiday and Fortune magazines. This awakened an early and prophetic environmental concern - the industrialist smells the flower, unaware that his enterprises are the cause of the destruction of nature. The cartoonist Marc Boxer criticised Searle in the 1970s for forsaking being funny for being ‘meaningful’ and preachy, and this cartoon might be trite by today’s standards. But, as ever, the drawing makes up for its period timidity. Has he got the German flag wrong though?

Los Angeles, 1957In 1957, Searle continued his association with the journalist and novelist Alex Atkinson with a series of features for Punch on America, a gentler version of the future collaboration between Hunter S Thompson and Ralph Steadman. It appeared in book form as USA for Beginners (by Rocking-Chair Across America). Here, Searle’s sweeping baroque lines conjure up a boulevard entirely composed of mortuaries of Las Vegas ostentation. The whole fantasy seems in the grip of some ghastly graphic growth hormone, including the carbuncular rococo automobile.

Louis Hellman has been contributing cartoons to the AJ since 1967

Posted by Matt Jones at 9:45 AM No comments:

Mr Searle never fails to astound me with his remarkable recall.  He sent me the following info on a recent obscure find: 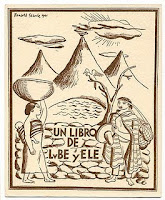 "In your blog you reproduced a 1941 'South American' subject of mine. I can tell you that this was a bookplate for one of the officers of the American troopship USS Mount Vernon that was carrying us to Singapore. His name was Edmund L. Engel (ELE) and his wife's initials were LvBE. Very odd that a copy should turn up, after all these years, on e-bay. He, ELE, died many years ago. We correspondend after the war until his death." 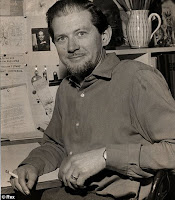 The Daily Mail has an article calling for a knighthood for Searle.  The author feels like many of us that Searle's home country has long neglected honoring the man or his art.  Read it here.
The Daily Telegraph reports on the Searle archive going to Germany.


'Webb first encountered Ronald Searle when he sent cartoons to Lilliput. ("I liked his jokes," she said later. "And I loved his handwriting." Who could resist that inky Searle scrawl?) Searle spent most of the second World War in a brutal Japanese prison camp, and when he returned to England he finally met Webb in person. Webb had already been married twice, but she couldn't resist him. Grove's depiction of their initial romance is very touching, not least because the reader knows it would end so unhappily years later. They married in 1948, several months after Webb gave birth to their twin son and daughter. 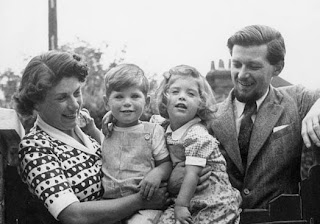 The Searles spent the 1950s surrounded by the most exciting writers and artists of the day. Their striking modern house, filled with curiosities and Searle murals, was the setting for fantastic parties - the guests at one 1952 event included Alec Guinness, Peter Ustinov, Clement Freud and Edward Ardizzone. But in 1961 Searle left his wife with no warning, leaving a note. As Grove shows, she never really got over him.'

Anna Carey in the Irish Times


Anita O Brien, curator of the London Cartoon Museum tells me: "Ronald has donated four originals to the Cartoon Museum collection together with prints of 'More News from Provence', and some Le Monde cartoons plus the collection of pens, pencils and papers which are on display. These are the four the trustees chose. Ronald thought it was a good choice."

Over at Cartoon Brew Amid Amidi has flagged up the CTN-X website where you can now watch my presentation on Searle's work in animation and film titles.  The link is here. 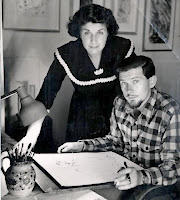 You can read another positive review of Valerie Grove's biography of Kaye Webb at the Daily Mail website.


Louis Hellman discusses architecture in Searle's drawings over at the Architects' Journal website.

An original Searle is up for auction on Ebay.  It's in aid of charity PACT ; Parents & Abucted Children Together. 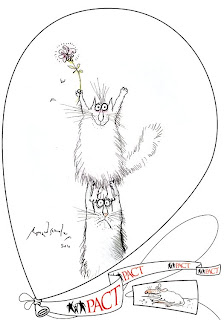 This is the last week it's up for auction.  Place your bids here