British satirical magazine Punch famously had a table installed at their offices where the subject of the week's political cartoon would be decided.  A seat at the table was strictly reserved for members only but on the 7th April 1953 Searle was the first guest since Mark Twain to be permitted to observe proceedings.  He was later to become the youngest member of the Punch cabal, his beard only just tolerated by the older men!  'At the invitation of the new editor, Malcolm Muggeridge, a self- confessed 'addict' of Searle's work who wished to bind him closer to the magazine' (Russell Davies). 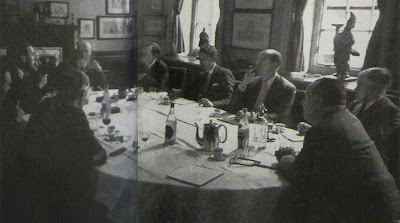 It was customary that each member or guest inscribe their initials into the surface lacquer-and Searle, in typical fashion, etched an elegantly gothic R.S. 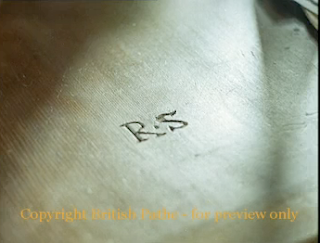 The position of Searle's initials on the table can be determined from this diagram from the Punch Cartoons website.  It's at the centre bottom.

On his first lunch at the Punch Table on the first of February 1956 Searle recorded the welcome exended to him and took note of where each were sat at the table:

Alan Agnew: 'The first business is to welcome to the table Ronald Searle.  I'm sure we all hope he will enjoy our company and conversation as much as we shall enjoy having him with us.

A.A. Milne died the night before 'They replaced him quickly' said somebody.
Malcolm M. (Muggeridge) was on the ferry boat delayed from France, Russell (Brockbank) was in the editorial chair.
Basil Boothroyd - I'd like to add my personal congratulations now I'm not the youngest member.'

This last notation reinforces just how conservative the group was:
'First beard at the table since 1901.  The last was E.T. Reed and he was sacked for homosexuality.' 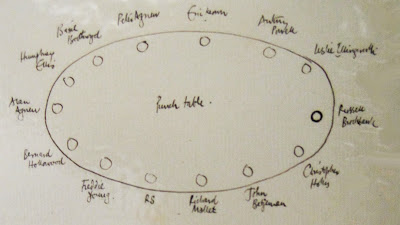 Punch cartoonists Bill hewison and Russell Brockbank are observed in this 1962 Pathe newsreel on the magazine's cartoonists and the table. 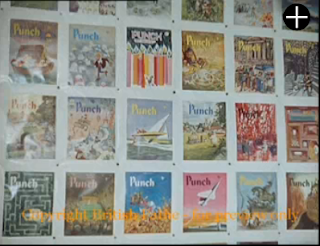 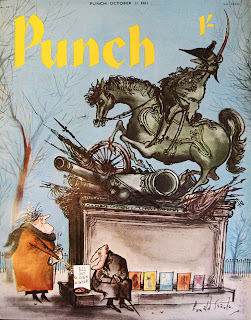 To celebrate this prestigious membership Searle bought himself a handsome 1955 1st edition of Picasso's Graphic Works. (Recently sold on eBay) 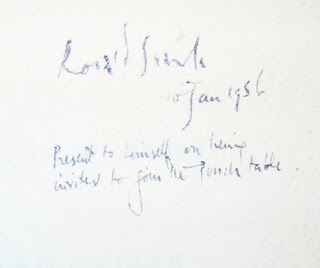 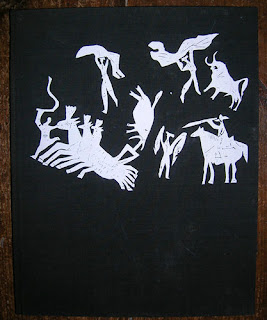 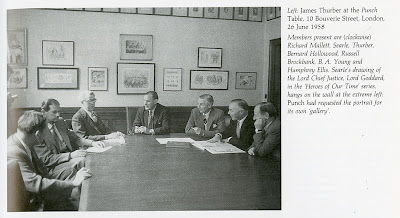 In this photo published in Russell Davies' biography of Searle we see James Thurber visit the Punch offices with a young Searle seated next to him on the left.  One of his 'Heroes of Our Time' pictures hangs on the wall beyond him.
Posted by Matt Jones at 6:09 PM No comments: 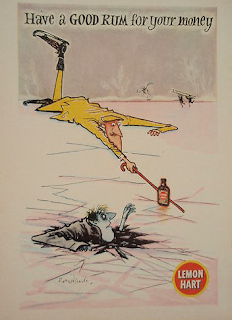 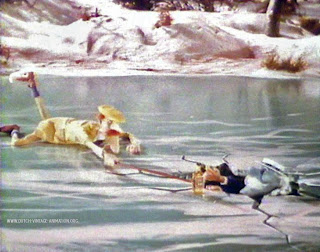 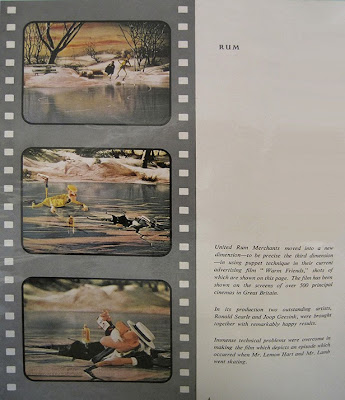 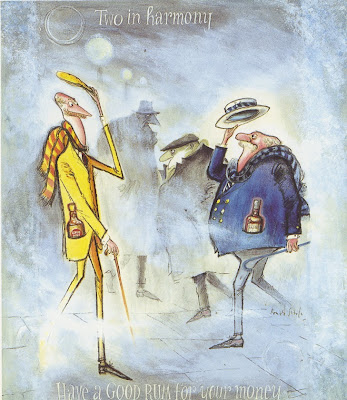 Ronald Searle's drawings of the  Berlin Wall feature in a new exhibition on the Architecture of War at the Imperial War museum, London.  I believe Searle bore witness to both the construction of the wall and the destruction. 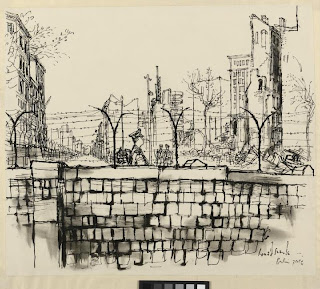 Within a short distance of the Potsdamer Platz, VOPOS patrol a double barrier of stone and barbed wire. Along this strip of no-mans-land an armoured car stands with guns at the ready. Stockpiles of teargas were at hand for the VOPOS. 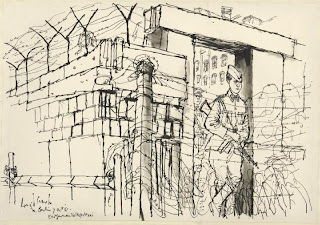 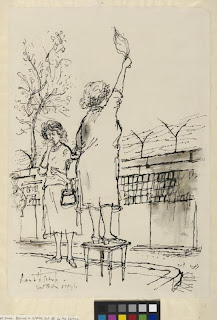 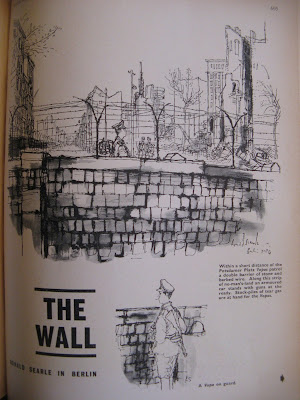 The drawings were published as a reportage spread in Punch magazine 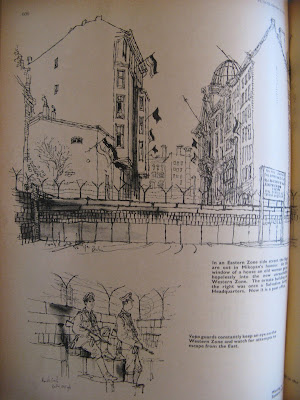 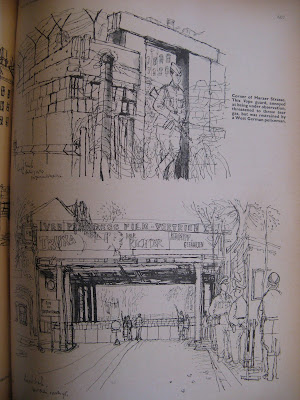 A more humourous observation of the Wall was later drawn for LOOK magazine
"The Rise of New Nationalism in Germany" December 14, 1965
Reprinted in 'From Frozen North to Filthy Lucre'. New York: Viking Press, 1964, Page 59 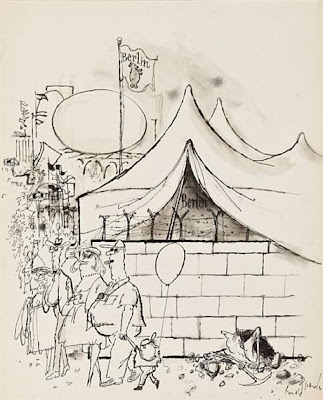 "Note that Searle has labelled Berlin twice, to make certain we can "read" the gag and perhaps also to show the two faces of Berlin, that of Communist propaganda and that of harsh reality. This was published roughly just after the closing of the New York World's Fair in October of 1965, so the idea of the American international fairground was still quite relevant. The Berlin Wall had been erected in 1961." - Stephen Nadler at Attempted Bloggery 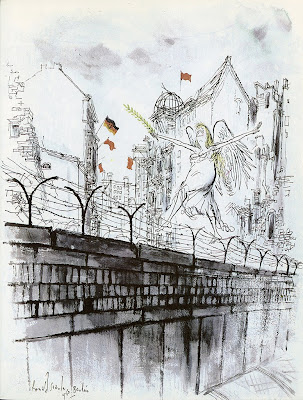 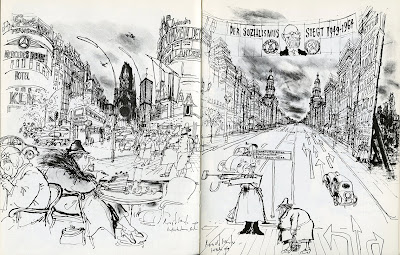 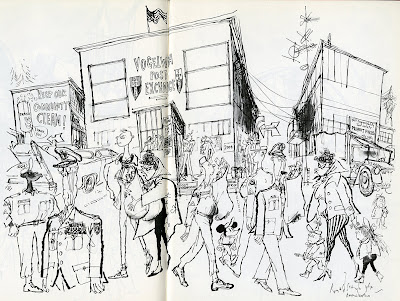 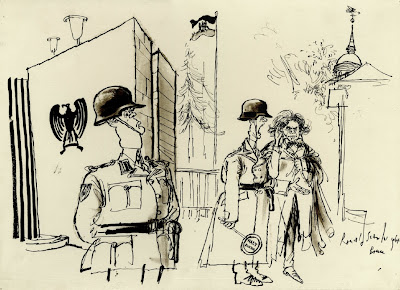 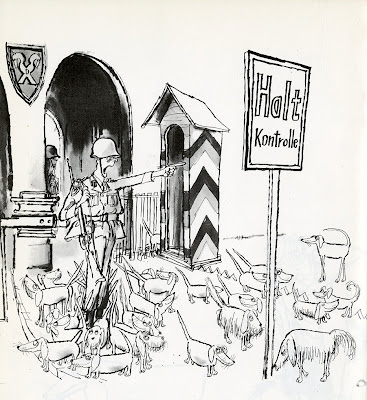 'Buxtehude'
(a town where the dogs bark with their tails- apparently!) 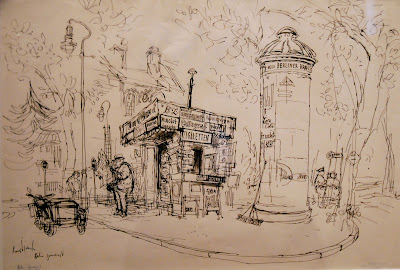 © Ronald Searle 1961, by kind permission of the artist and The Sayle Literary Agency
Posted by Matt Jones at 7:24 PM No comments: