'One of the most influential illustrators and cartoonists of his time, Ronald William Fordham Searle, (1920 - 2011) is considered one of the leading artists of 20th century Euro-American illustrative
arts. The British artist whose artistic oeuvre spans over five decades, has contributed to numerous prominent publications, such as The New Yorker, the Sunday Express, News Chronicle and Punch
just to name a few.
The impact that Searle’s style has had on graphic arts is hard to overstate. Searle’s signature style of line drawings by ink pen has paved the way for innovations in contemporary illustration and
animated films. Regarded as a radical aesthetic during its time, this edgy style was to influence later generations of animated film across a span of genres, such as Walt Disney, United Productions
of America (UPA) animation studio, all as well as contemporary artists such as Sylvain Chomet and Matt Groening. 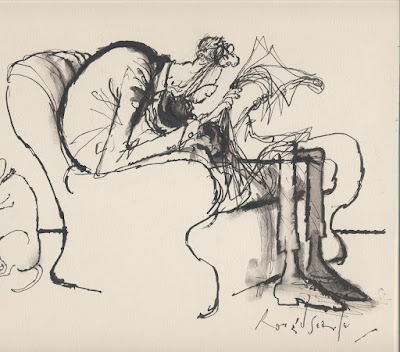 The Magical Pen Line: Ronald Searle features over 50 reproductions of rare illustrations, sketches and artefacts, from the Imperial War Museum (London) and the Wilhelm Busch Museum of Carica-
ture and Illustrative Arts (Germany).
The exhibition traces the young Ronald Searle’s time in Singapore as a prisoner of war. During this time, he produced more than 300 drawings and illustrations documenting the Japanese Occupation
in Singapore where he was captured and was forced to work on the Thailand-Burma Death Railway. This first part charts his un-flinching determination to give a personal and direct picture of the
facets of war, from ordinary days in the camp to brutal incidents, as well as early cartoons.
It also shows the birth of what became Searle’s signature style in the technique of quick and pointed sketching, and in the way he will present his satirical outlook of life. To quote him in a 1967
interview, “Everything was rooted there I think. To go into those sort of circumstances... inevitably marks you, marks your way on anything you do, anything you relate to afterwards.”
In this exhibition, you will see Searle’s skills and dexterity in translating scenes – both from the realms of conflict and struggle, as well as the realms of entertainment and satire – a skill that will later grow to cement his reputation as a versatile artist.
Complementing this selection are also his works as an illustrator and designer focusing not only on satirical cartoons, but also on his work on animated films, showing title and character designs as
well as story boards.
Searle received widespread recognition for his unique work, and original style especially in America. He received the National Cartoonists Society’s Advertising and Illustration Award in 1959 and
1965, the Reuben Award in 1960, their illustration Award in 1980 and their Advertising Award in 1986 and 1987. He was appointed Commander of the Order of the British Empire in 2004. In 2007,
he was decorated with one of France’s highest awards, the Chevalier de la Légion d’honneur, and in 2009, he received the German Order of Merit.

The Magical Pen Line: Ronald Searle is held in conjunction with the Society of Animation Studies Conference which is organised by the School of Art, Design & Media (ADM), Nanyang Techno-
logical University.'


(From the pdf Exhibition & screenings here) 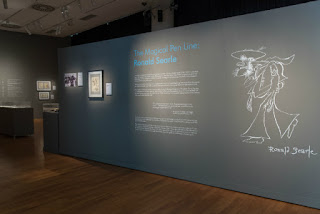 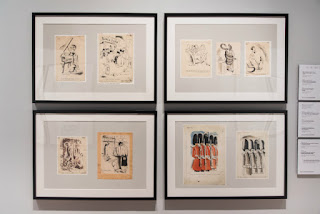 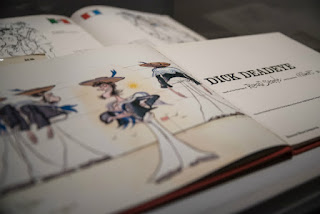 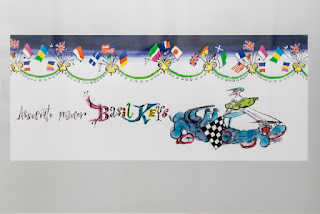 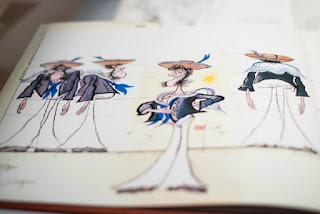 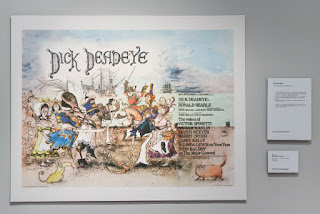 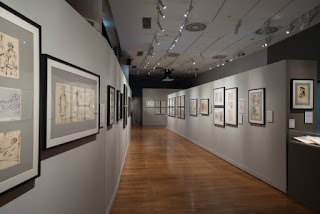 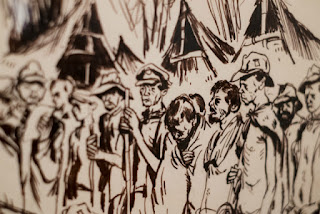 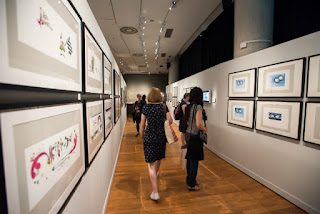 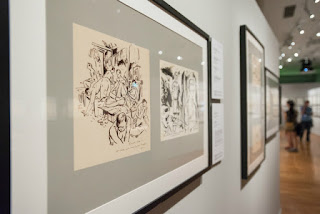 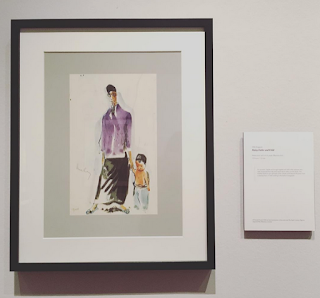 More info here
Posted by Matt Jones at 4:17 AM No comments: 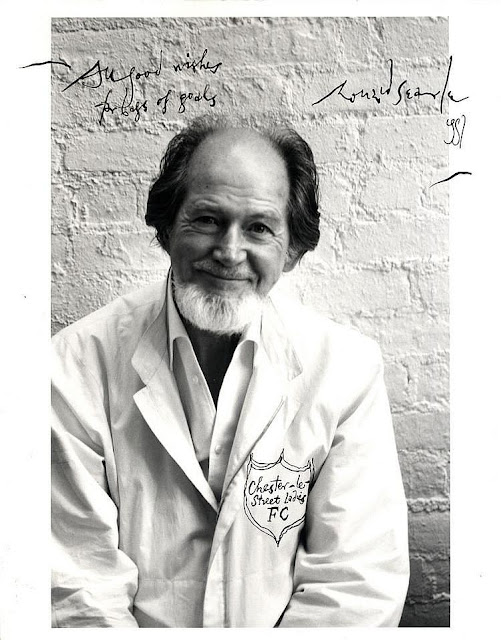 
'Observation – some people appear oblivious to what is around them. Others cast a keen eye across their surroundings and the people inhabiting them. Illustrator Ronald Searle (1920 -2011) was a master of the latter, injecting it both into his reportage work and successful cartoons such as St Trinian’s, and this superb book revisits his impressive output from across America (and Canada) on assignment for several magazines from the late 1950’s onwards. 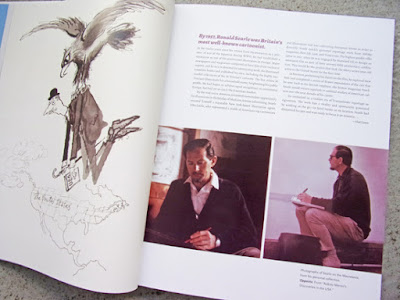 Curated by Matt Jones, who runs the Perpetua: Ronald Searle Tribute website, this impressive coffee table sized publication breaks down Searle’s travels into various locations (and political campaigns by Kennedy and Nixon), showing work that has rarely been seen since original publication in the 1960’s, with fascinating on site drawing, rough sketches which reveal the workings behind a joke, plus the richly detailed final images in line and colour. Stylishly designed, it’s a treat for all who love drawing (and being entertained – several drawings had me laughing out loud), offering an insight into Searle’s modus operandi and the effort that went into these assignments. Drawing in blizzards, anyone, to capture life in Alaska? There’s not many of us with the tenacity to deal with ink freezing in our pens! 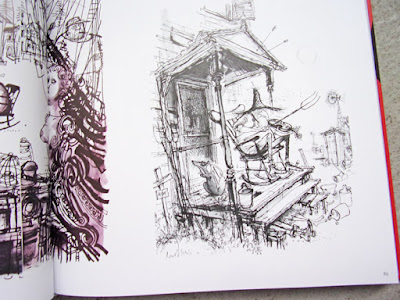 In the Foreward, Pete Docter calls Searle’s drawing “delicious to look at”, a fantastic way to describe the pleasure of observing the varied fluid line, the capturing of ‘place’, the recognisable people (much of this work could be published today – preening bodybuilders, rich elderly retirees, elaborately kitted out skiers…). How great to have dropped him into the hipster hang outs of our major cities lampooning the dress and rituals, or puncturing the self importance of many media stars, famous for, well, what? 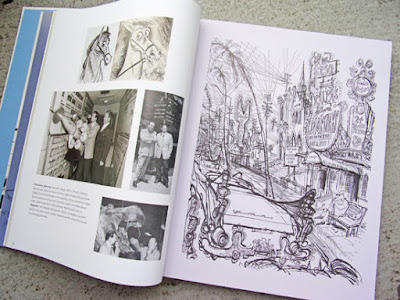 One of the strengths of Searle’s humour is its grounding in real life situations, so although there are universal elements, the people (or animals) who are the subject of his visual joke inhabit an exaggerated but authentic environment, with enough detail to ground and enhance the humour. 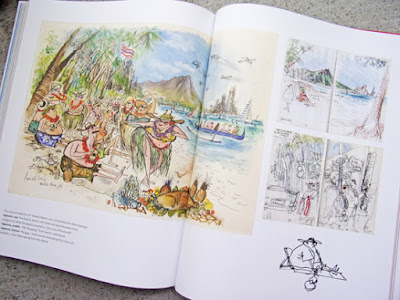 Searle is well known for the sharpness of his wit, and no one escapes in these American drawings. It’s often an individual put upon by the ordinary/extraordinary environment around them, whether that’s a man scurrying down a dark New York street proliferating with aggressive street signs, or a tourist being snatched up in the air by a sharp taloned Native American carved bird seemingly detached from a totem pole. Jones supplies informative captions on what images are and where they were published, and articles and letters by Searle himself or others are interspersed throughout the book offering interesting background. 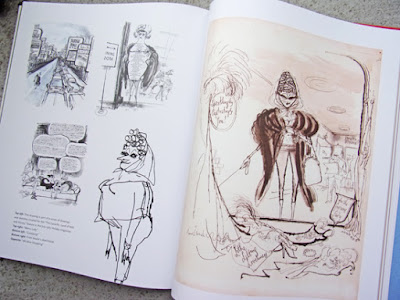 Searle discusses situations with the same focused observation he brought to drawing, and not just on magazine work. He had strong views on visual documenting, “Reportage has to have flesh, bones, and above all life in it. One is not illustrating, but pushing one’s nose into life. On top of that one must have something to say – however crass. Reportage is not reporting: it is opinion and comment that takes it away from journalism into (minor) art.” 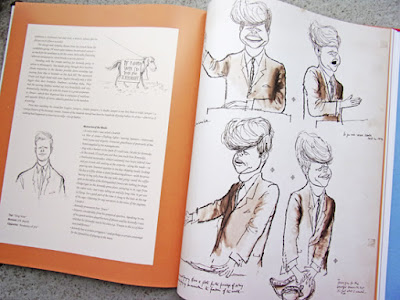 From a man who appears to have had no end of talent (and application), this substantial book is a true visual treat. A great addition to the published work of Ronald Searle.' 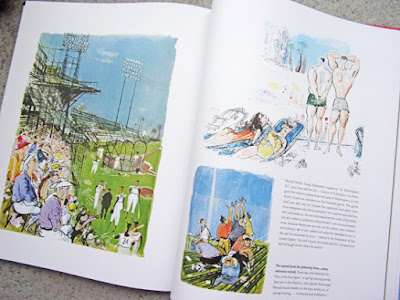 This coming Saturday, June 18th I'll be at the Charles Schulz museum in Northern California delivering a lecture called 'Private View' which is a look at my visits to Ronald Searle in his studio and the story behind my book 'Ronald Searle's America'. More info on the museum website here 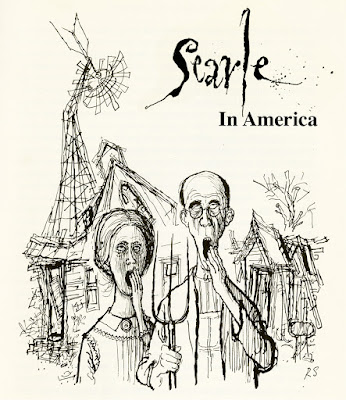 Posted by Matt Jones at 3:07 AM No comments:

Searle's depictions of the traditional English 'drawing room' environment or gentlemen's club are bravura examples of his technique. 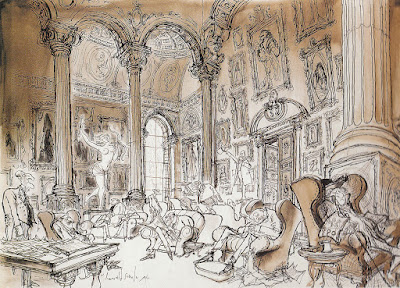 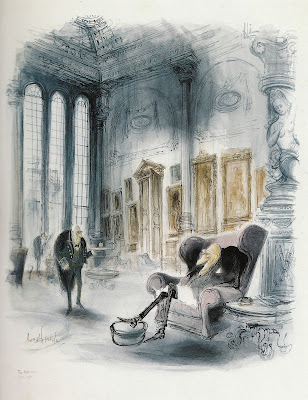 'The Fortress of the Englishmen' Punch 1958 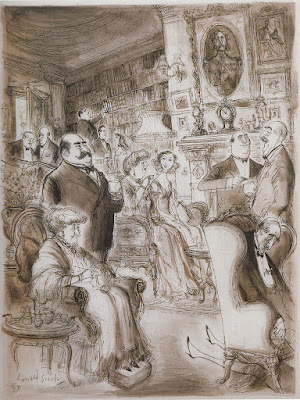 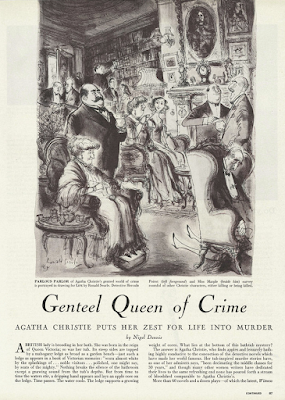 On a recent trip to Australia I hit the Searle trail in Melbourne . . .


More on Lofty here
Posted by Matt Jones at 4:29 PM No comments: