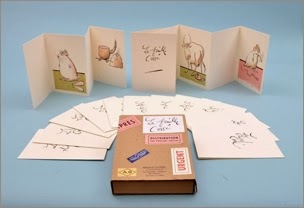 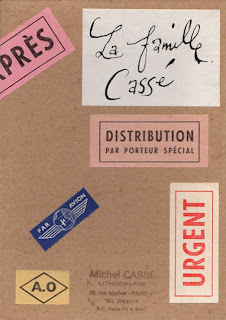 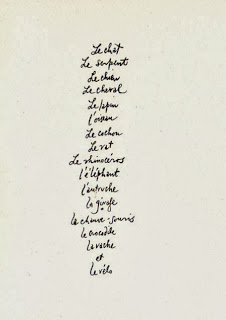 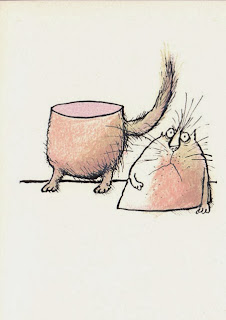 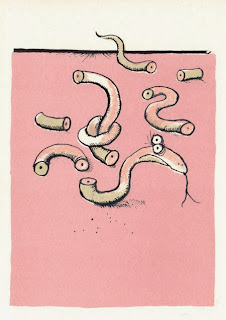 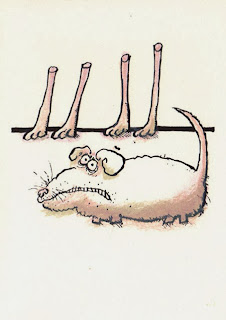 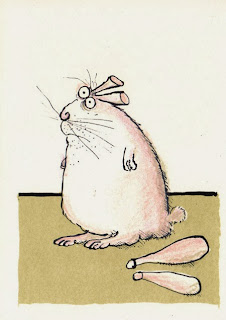 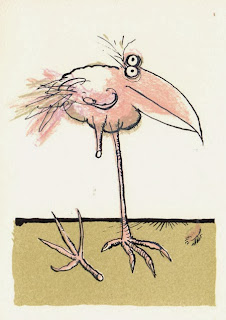 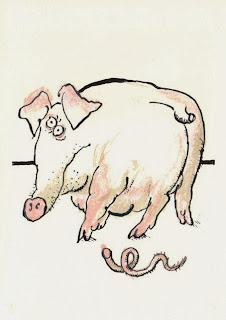 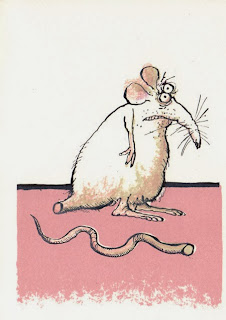 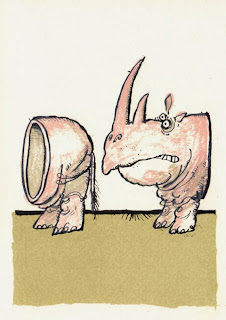 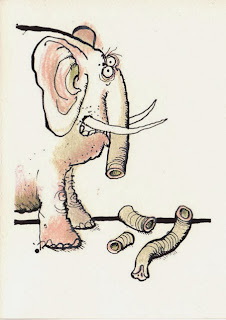 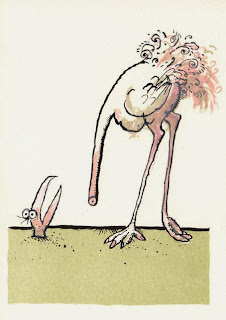 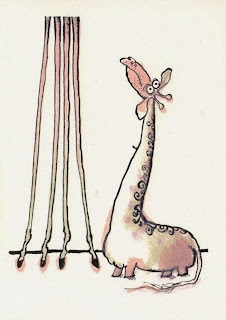 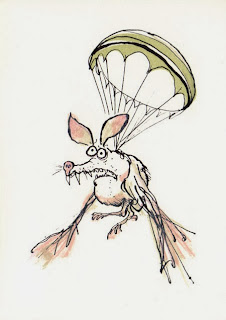 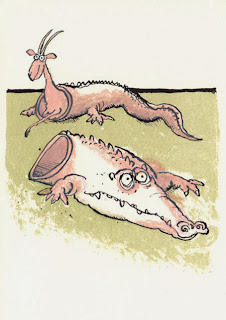 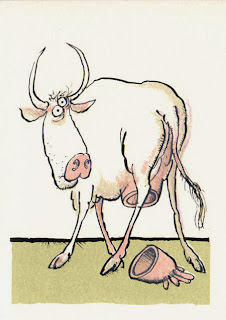 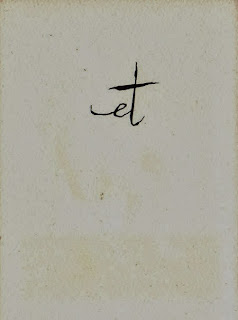 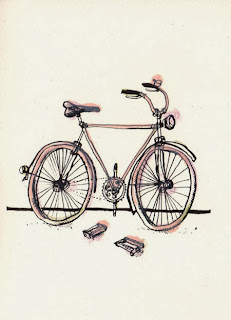 Posted by Matt Jones at 6:15 PM No comments:

Amid Amidi at Cartoon Brew features the quirky Christmas card designs of Disney animator Ward Kimball.  Searle visited the Disney studio in 1957 and remained friendly with several of the animators including Kimball. Here is the animators' 1966 card to Ronald. 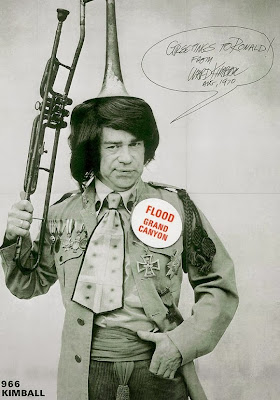 Kimball also sent this get well card to Monica Searle when he learnt of her cancer treatment. 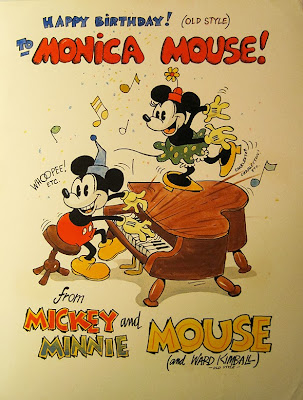 Posted by Matt Jones at 6:20 PM No comments:

I've launched an official Facebook page for updates & info on the exhibition at the San Francisco Cartoon Art Museum HERE!
Posted by Matt Jones at 12:54 AM No comments:

Robert Forbes has one of the largest collections of original Searle artwork in the U.S. and several pieces in 'Searle In America' were generously loaned from the Forbes Gallery, NYC.  Mr Forbes collaborated with Searle on several books of poetry for children and now Forbes has 60 of the pictures on display in Palm Beach, Florida. Read this article for more details 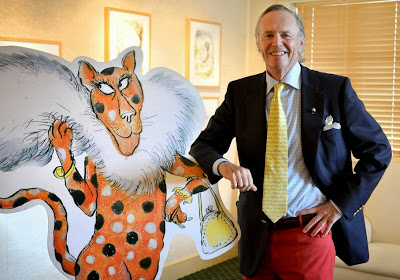 "Forbes, who has been writing poetry for about 15 years, has three books with drawings by Searle. He was known as one of the world’s top illustrators until his death in 2011. Searle produced work for Life magazine, The New Yorker, Holiday magazine, TV Guide and numerous British publications.
“I would send him three to six poems at a time,” Forbes said. “He never did preliminary sketches. Two or three months later, his package would arrive, and inside would be these glorious depictions of what was in my imagination and how he interpreted them and brought them to life. It’s rich, it’s whimsical, it’s silly, it’s lighthearted, it’s fun.”
Forbes said his fourth book with Searle needs about six more drawings. He plans to have another illustrator finish the book."
Posted by Matt Jones at 7:39 PM No comments: 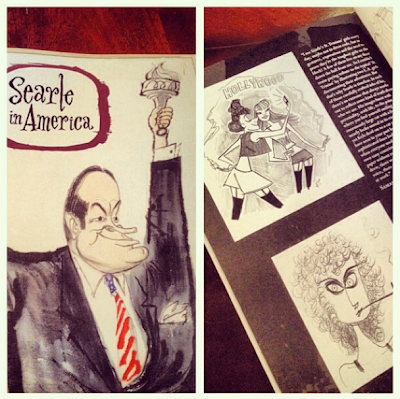 "Visited the Cartoon Art Museum and got to pick this up! So crazy to see my work in print with so many other incredible artists! The Searle show was great" - Samantha Vilfort, contributing artist 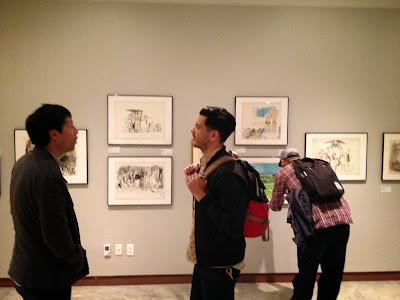 "Members of the Advanced Character Design class I am taking at the Animation Collaborative (taught by Chris Sasaki) attended "Searle in America" at the Cartoon Art Museum in San Francisco. This show of Ronald Searle's work depicting American subjects is remarkable and a MUST for anyone breathing, let alone an interest in character or design. Matt Jones is responsible for this gem of a show and I have to say he did a perfect job bringing it all together. GO AND SEE THIS SHOW!" -Peter Emmerich,  contributing artist
Posted by Matt Jones at 7:47 PM No comments:

Kenneth Baker, art critic at the San Francisco Chronicle, interviewed me about the exhibition. It appeared in the Thanksgiving edition. 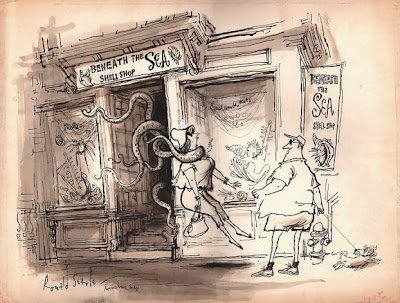 'Countless Americans probably have seen the work of British cartoonist Ronald Searlewithout realizing it. People often confused it with that of prominent younger contemporaries Ralph Steadman and Gerald Scarfe, who salute Searle's influence.
Famous for wild-eyed drawings of cats, Searle (1920-2011) drew numerous illustrations for American periodicals, from TV Guide to theNew Yorker. He inspired even much younger contemporaries, including Matt Jones, who recently organized "Searle in America" at San Francisco's Cartoon Art Museum.
Born in Wales, Jones, 37, has lived in the Bay Area for a number years, working as a storyboard artist for Pixar. His admiration of Searle's art led Jones to set up a blog devoted to his art in 2008.
We discussed the exhibition by phone.

Q: When did you get interested in Searle?
A: Growing up in the U.K., it's sort of in the DNA of the culture. The St Trinian's girls were famous. They were these boarding-school girls Searle invented who went around tormenting their teachers and other students. Many things in those books were based on his experience as a prisoner of the Japanese in World War II.
Q: Did you meet Searle?
A: I got to know him a little bit, and he ended up contributing to the blog, and was very appreciative of it. ... He had a reputation like (Stanley) Kubrick of being a recluse, and seeking privacy at all costs. But to me, he couldn't have been more of an old-school gentleman, very hospitable, very generous, full of stories. I hope some of them will make it into the book I have planned. ... He didn't drive, so back in the heyday of magazines that would fly him first class all over the place to illustrate travel stories, his agent had to drive him thousands of miles.
Q: Do you find yourself imitating Searle's way of drawing?
A: I try not to, but once you've seen his work, you can't unsee it. He didn't mentor me as such, but he gave me pointers, and I have them in mind when I'm working. ... He's my Obi-Wan Kenobi. ... He used to caricature even buildings. ... You can see a razor-sharp satirical mind jabbing at the culture.

Posted by Matt Jones at 5:43 PM No comments: