Lunch with the Searles

After my previous visit with Mr Searle which lasted barely 2 hours I was of course keen to meet him again & discuss his work. The more I find out about Searle's art the more questions seem to arise. I was delighted to receive an invitation to lunch from Mr & Mrs Searle which was appointed for the 20th June & they suggested I bring a friend too.
I asked my good pal Uli Meyer to come along. I've worked with Uli a lot in commercial animation and, like me, he's a huge Searle fan. Uli's a tremendous artist and I knew that Mr Searle would be interested to see Uli's work too. 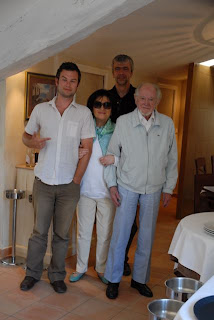 We met at noon in the Searles favourite restaurant & Ronald immediately got the champagne & conversation flowing. Over several subsequent bottles of wine & delicious courses from the excellent menu we talked about myriad subjects. Of course drawing & art was prevalent but it was fascinating also to hear Ronald & Monica's tales of travelling, family history, famous friends & acquaintances and battles with ill health. Both are in their 80s now (or 'the late afternoon of their lives' as Monica likes to put it) but they retain an exuberant vitality. Generous & welcoming they made both Uli & I feel like old friends.


I asked Ronald of all the far flung destinations that the HOLIDAY assignments took them which was their favourite. Rather than exotic Hawaii or Morocco they said it was Alaska. Despite the sub-zero temperatures it was the friendliness of the people that made the trip memorable. They told us a strange story of being greeted by the proprietor of a remote store who told them he had been expecting them. Noticing Searle's name in the ledger book he enquired if he was the Ronald Searle. On affirmation of this he revealed that he was a huge fan and possessed a full collection of Searle's books. Not only that but he had a bottle of champagne on ice and a sketchbook ready for Searle to draw the man's dog! 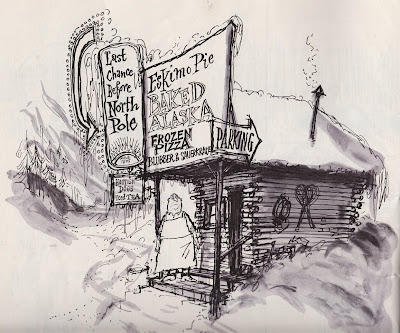 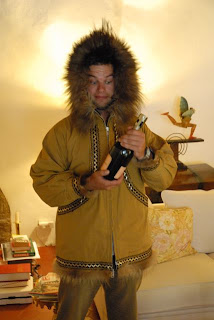 Another amusing anecdote the Searles told was when they discovered the hard way that seal skins are cured with urine! They went to a cinema one evening & the combined heat & over-powering ammonia saw that they left after 5 minutes!

Ever the fashionista Monica had an Eskimo jacket tailored for her trimmed with wolverine fur. Later at their house she took out the jacket to show us. After 40 years it was still in perfect condition & thankfully smelt fine. She even let me try it on-it can withstand temperatures well below -20 & wearing it in summertime haute Provence meant I was soon feeling very toasty!

Good news for Searle fans is that a book is in the works based on the HOLIDAY sketches. These have been collected before in 'FROM FROZEN NORTH TO FILTHY LUCRE' but was not definitive. The Hawaii drawings were not included & most of the sketches from Morocco remain unpublished.
Posted by Matt Jones at 8:59 AM 5 comments:

Uli Meyer and I both have brief accounts of our afternoon spent with the Searles last weekend. See Uli's blog & mine to read more. I'm working on an extended report to appear here soon . . . 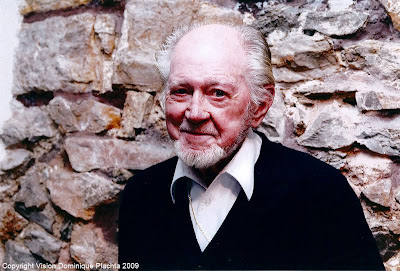 Mr Searle was kind enough to send me this recent photo taken by local photographer Dominique Postera. He turned 89 this year & looks in fine form. Next weekend I'll be visiting Mr Searle again - I'm excited to have another chance to discuss his work & drawing in general.
Posted by Matt Jones at 4:20 PM 6 comments: