My friend and fellow Searle enthusiast Uli Meyer has spotted a poor Searle copy coming up for auction at Bonhams The established auction houses never believe us when we point out forgeries. 'Who are you to comment' one well known small gallery near the British Museum once snootily told me when I pointed out they were selling a Searle copy. Our opinions just weren't accepted as we weren't qualified to comment in their estimation. I can see they might take the challenge as an affront to their informed expertise. I used to forward links to Ronald and he would chase them up himself but now he's gone there's no one to protect the casual buyer. Uli writes:

'The image on the right is a terrible tracing of a drawing by Ronald Searle, on the left. Incredibly this embarrassing, awful fake is currently up for auction at the famous auction house Bonhams. I made them aware that the drawing is a fake and a terrible one at that and sent them the image of the original. The 'expert' I spoke to still isn't sure and incredibly, it is still up for sale. How can a reputable auction house employ so called experts that can't tell that this atrocity is not a drawing by one of the most influential graphic artists of the 20th century. It boggles my mind.' 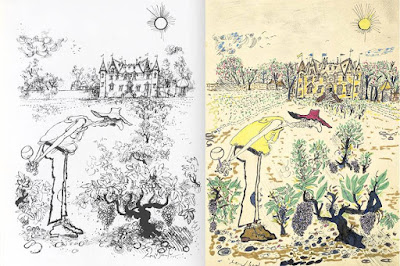 There appears to be an amateur forger in the UK who intermittently slips poor copies onto the market- always at a different auctioneers. I've tackled this issue before where the eBay seller was challenged in the comments section and justifies the sale with the disclaimer 'after Ronald Searle'. Read it here


**UPDATE** the piece has been removed from the sale
Posted by Matt Jones at 6:07 PM 3 comments:

Ronald Searle (1920-2011) is among Britain's most popular and celebrated graphic satirists.
Born in Cambridge, Searle is best known as the inventor of the fictional girls’ school St. Trinian’s (1948) and for his collaborations on Geoffrey Willans’ Molesworth series (1953- 58). However, as this exhibition shows, he had a long and productive career across a range of different genres. Searle worked as a war artist, but also made drawings for book and magazine illustration, travel reportage, theatre, film, medals and political caricature. Fuelled by visits to the Fitzwilliam Museum during his formative years, he had keen sense of his own place in the history of caricature - a selection of work by the caricaturists he most admired will be on display in a complementary exhibition in the Charrington Print Room (16).
This exhibition is drawn from a recent gift of the artist’s work, generously presented to the Museum by his children in 2014.
An associated exhibition Coming Home: Ronald Searle and Cambridge School of Art, curated by Professor Martin Salisbury, will run concurrently at Anglia Ruskin University's Ruskin Galleryfrom 13 October - 19 November.
Image: Ronald Searle (1920-2011), Molesworth, 1999 (detail) © The Estate of Ronald Searle
Tue 13 October 2015 to Sun 31 January 2016 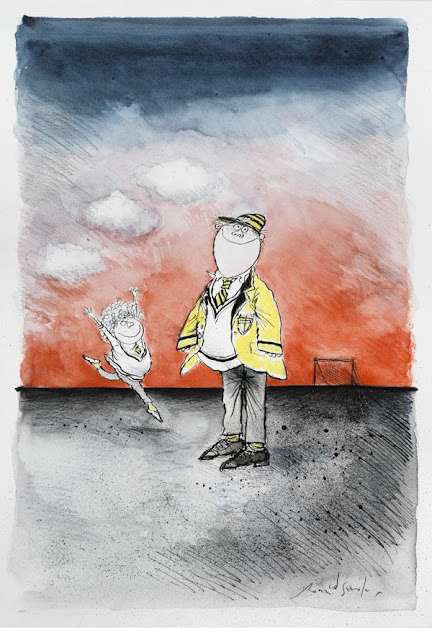 Thanks to Anita O'Brien at London's Cartoon Museum
Posted by Matt Jones at 7:08 PM No comments:

An interesting find on the Instagram account of user Ben Hausmann-Prior. Three Searle originals. He tells me 'They where originally commissioned for a carnival lantern in Basel Switzerland but were later cropped to fit frame size.' 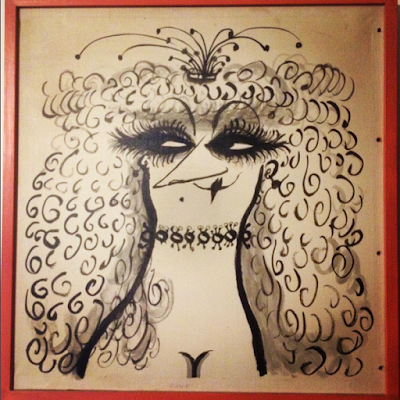 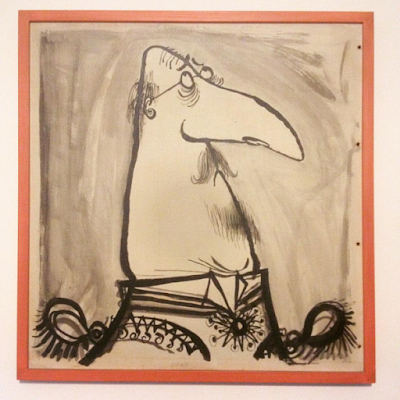 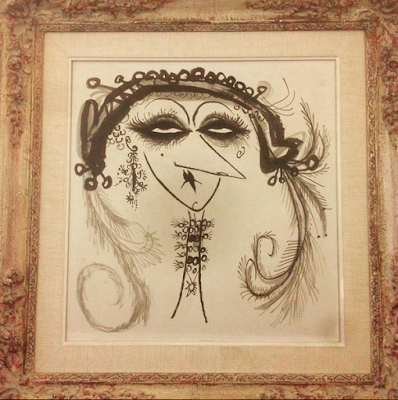 Posted by Matt Jones at 6:47 PM No comments:

Before the summer ends let's visit Brighton with Searle and Holiday magazine. . . 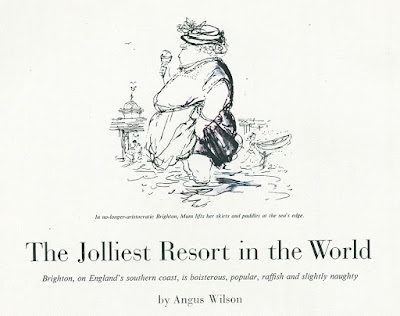 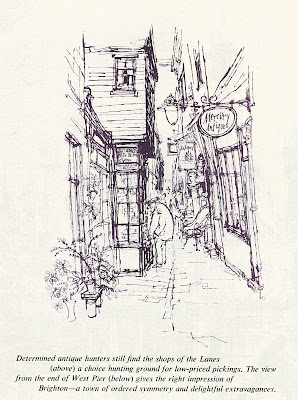 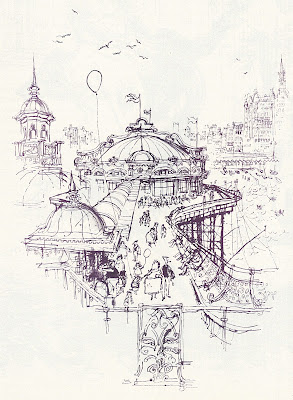 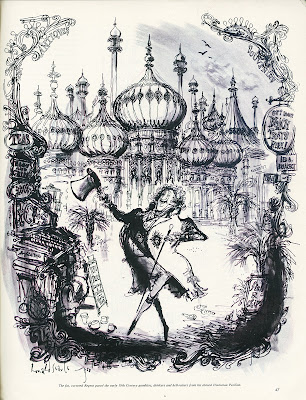 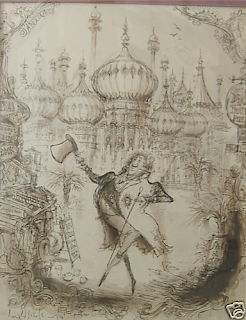 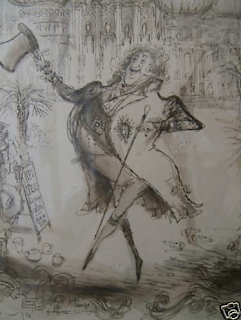 I've posted these wonderful, full colour images from 'Lilliput' magazine (1947) before but they're worth looking at in this context. 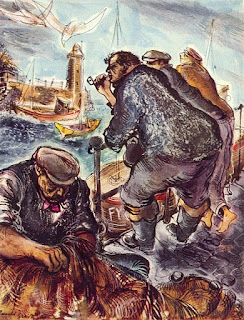 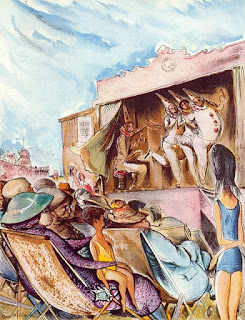 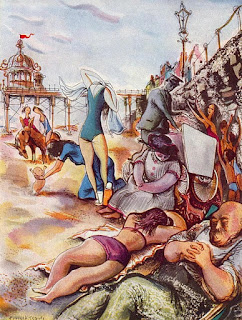 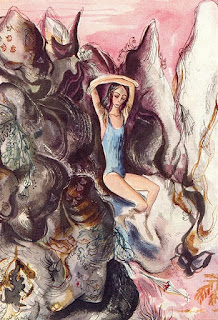 This Punch cover is a decade later 14th August 1957 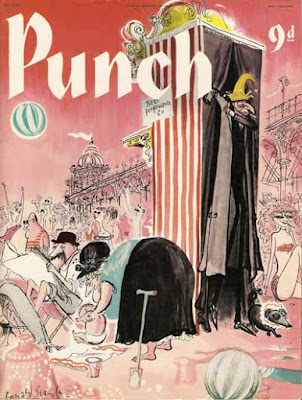 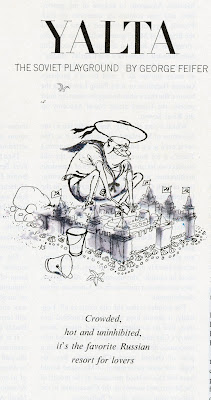 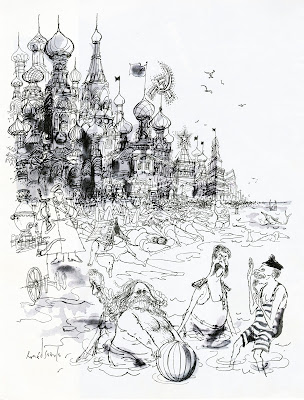 The Yalta image above is echoed in Searle's depiction of American beach scenes such as this Florida beach again for 'Holiday' magazine. 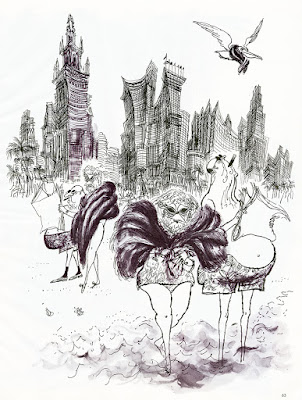 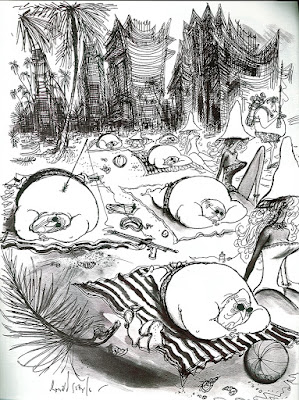 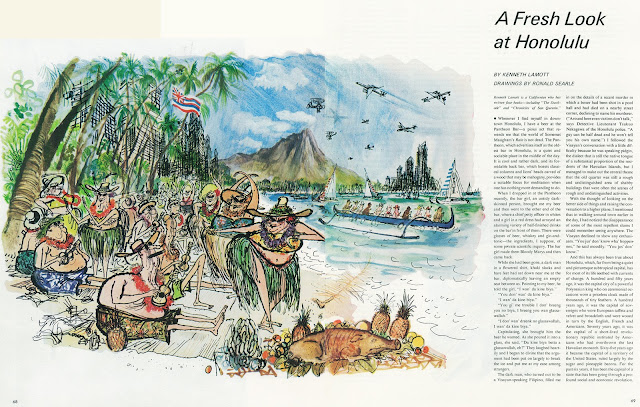 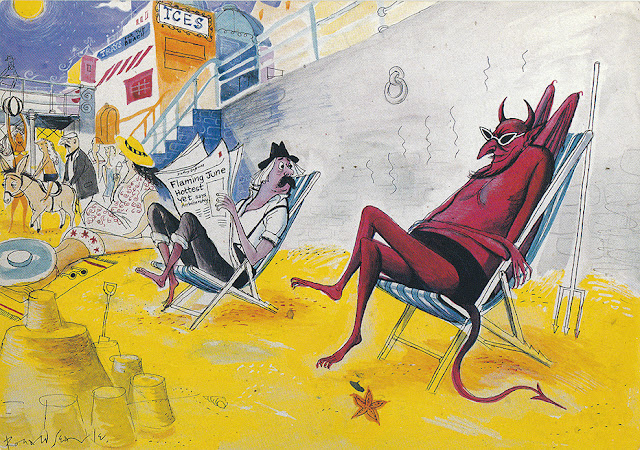 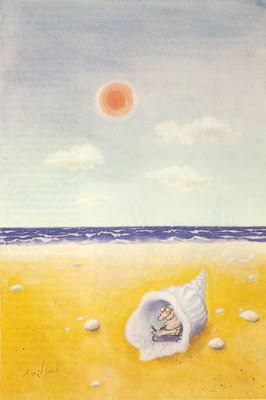 Posted by Matt Jones at 7:19 PM No comments:

My publisher Fantagraphics has the final cover art for the book listed on their site. It'll be released late November but pre-order the book there or Amazon. 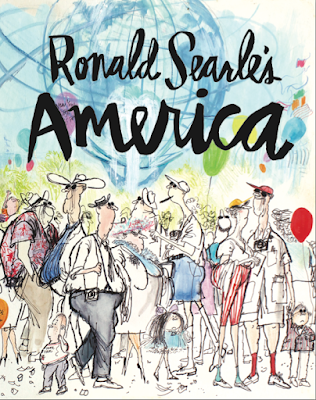 'This lushly-produced book compiles drawings and illustrations by legendary British illustrator Ronald Searle have been virtually unseen since their original publication in the 1960s. During this golden age of illustrative reportage, Ronald Searle—an influence on historic figures as wide-ranging as Matt Groening, Pat Oliphant, and John Lennon—was sent by American magazines such as Holiday and LIFE to far-flung and exotic locations. He would report back with a raft of drawings detailing his observations and experience in his trademark satirical and matchlessly virtuosic style.

Dispatched to America in the early ’60s, Searle spent several years covering everything from sports to politics, from spreads on Palm Springs and Las Vegas to the Presidential contest between John F. Kennedy and Richard Nixon for magazines such as The Saturday Evening Post and TV Guide, capturing the essence of the American experience as seen through the eyes of a caustic Englishman. Edited by the passionate Searle scholar Matt Jones, whose Perpetua: Ronald Searle Tribute website has become the foremost resource for Searle fans, the book also features a running commentary by Searle himself (as well as his wife Kaye Webb), including the journal he kept during the JFK- Nixon election, providing historical context to his assignments, recounting funny anecdotes, and making insightful observations about the drawings. This deluxe coffee-table book will be the most lavish treatment of Searle’s work that U.S. audiences have ever seen.'
Posted by Matt Jones at 10:30 PM No comments: