As a complimentary exhibit to that at the Fitzwilliam 'Coming Home: Ronald Searle and Cambridge School of Art', curated by Professor Martin Salisbury, will run concurrently at Anglia Ruskin University's Ruskin Gallery from 13 October - 19 November http://www.anglia.ac.uk/ruskingallery. 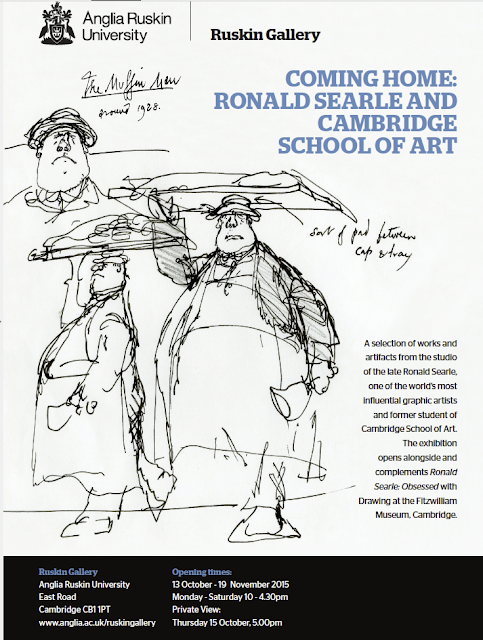 Posted by Matt Jones at 6:51 PM No comments:

Writer Patrick Campbell was one of Searle's earliest collaborators and the alter ego they developed for a series of stories that ran in Lilliput magazine marked the debut of the fully formed 'thin man' figure that represented the artist's trademark style.  As I wrote in the post on 'London Opinion' where we see the earliest incarnation of the proto 'thin man' by the early 50s Searle's style had matured and the cartoon version of Campbell was fully formed.

It has been observed that Searle's predilection for drawing his cartoon characters with thin, gangly limbs was influenced by his time starved half to death with his comrades as prisoners of the Japanese during WWII. Their emaciated, skeletal bodies would have undoubtably marked the young artist but I wonder if that explanation might be too obvious. Skinny cartoon characters are inately funny, as are chubby characters or old or infantile, Searle found the humour in all body types as in the illustration below. 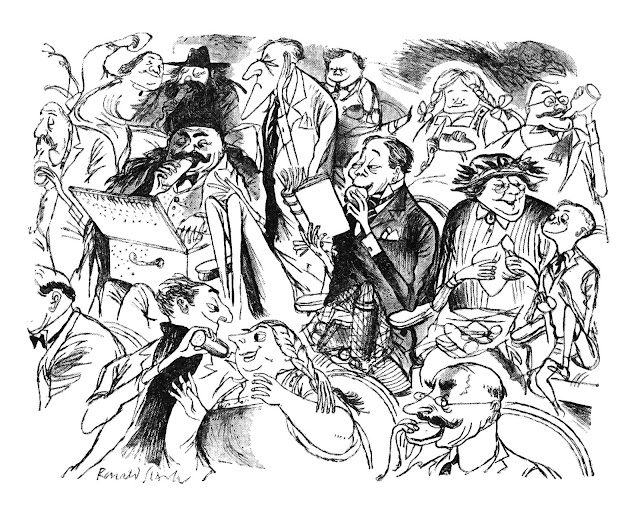 'Three Years At The Opera' by Patrick Campbell. From Lilliput (1949)

It might be that Searle was more influenced by the fact that he happened to work in his formative partnerships with two very tall and skinny authors. Searle spent much of the forties drawing in dark theatres on preview night as caricaturist for Punch magazine. Seated next to him with his knees under his chin would be the magazine's theatre critic Eric Keown, renowned for his height (6'7) and gangliness. (Read this post for more on Punch theatre and Keown)

Dublin-born Campbell was six foot five and made his name writing for the Irish Times despite being landed gentry.

'A Long Drink of Cold Water' (1949) collected stories from Lilliput magazine, 'A Short Trot With A Cultured Mind' (1950), 'An Irishman's Diary' (1950) reprinting material from the Irish Times, 'Life In Thin Slices' (1951) original material plus more collected from Lilliput 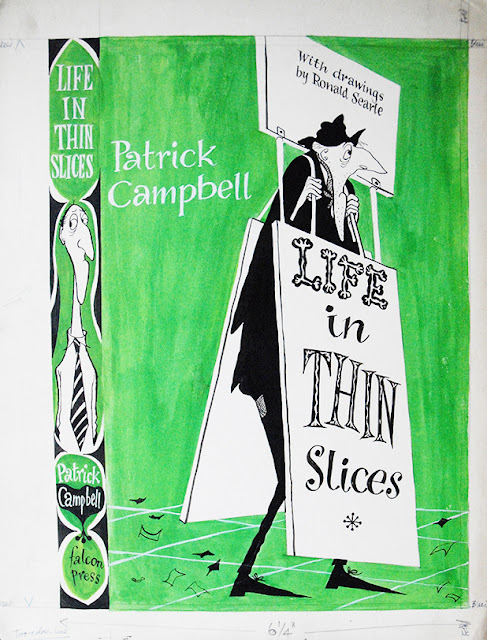 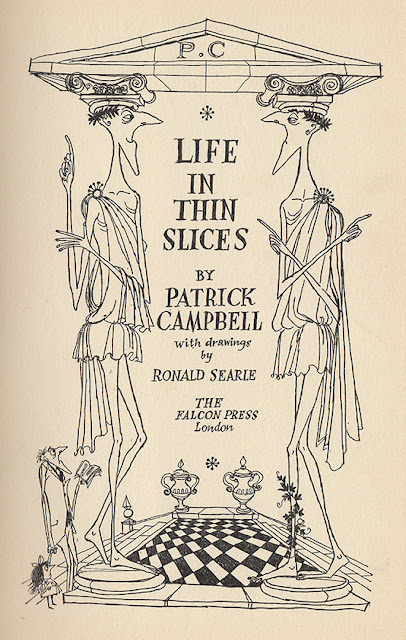 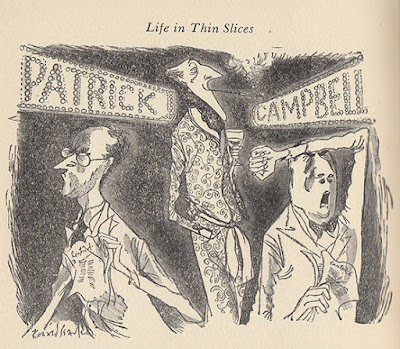 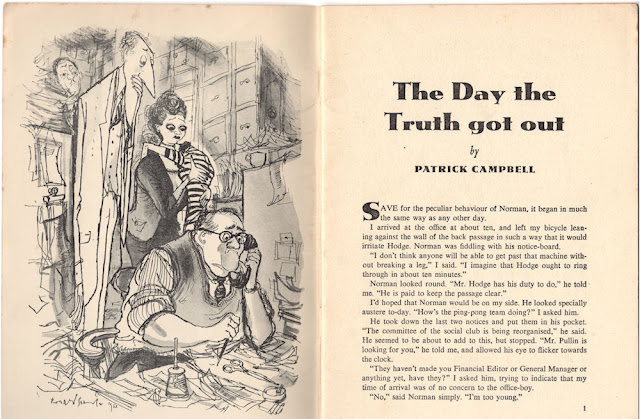 The reproduction of artwork in 'Lilliput' magazine was never great. In these shots taken from the original drawings for a Campbell & Searle Lilliput story we can observe the nuanced tonal work in the ink wash and Searle's lively penmanship. 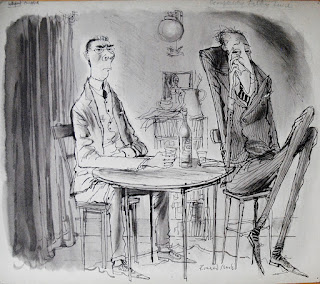 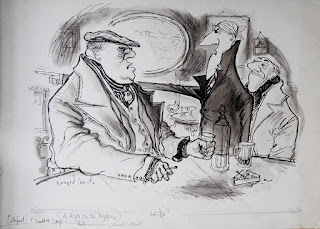 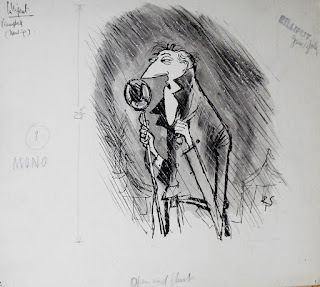 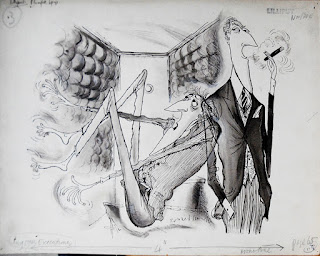 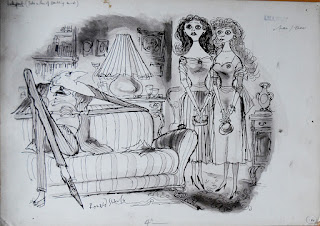 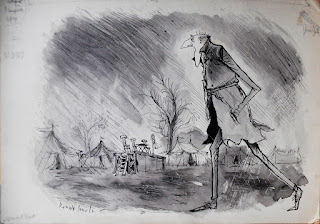 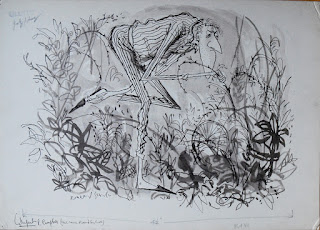 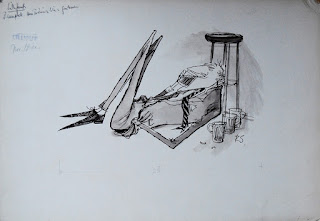 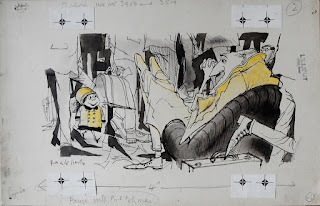 Searle worked hard to find inventive and interesting compositions. This one staged from behind the main character is striking; the two characters lost in a jumble of legs but connected by the minimal yellow tint. 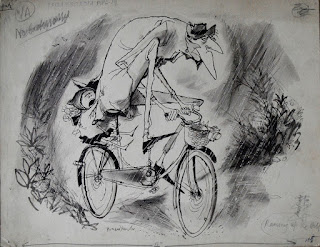 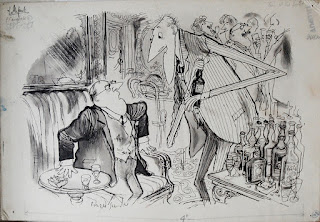 Searle's 'thin man' would evolve into the character Mr. Lemonhart the mascot of Lamb's Navy Rum. The tall, gangly gent in the yellow suit would feature in dozens of advertisements, posters, billboards and commercials for which Searle designed the artwork. A comprehensive collection of 'Lemonhart' images can be viewed here 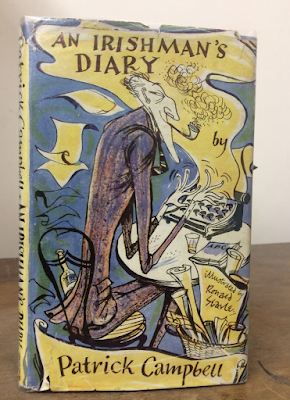 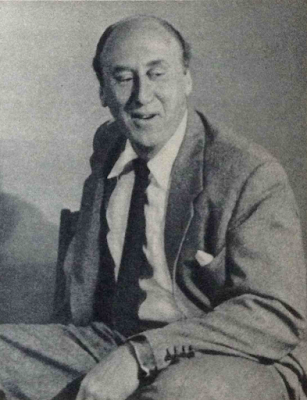 Patrick Campbell
Posted by Matt Jones at 8:37 PM No comments: 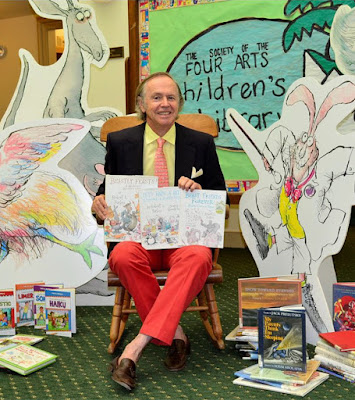