The first time I met Ronald Searle I had several key questions about his career that I hoped he would expand on.  Russell Davies' biography of Searle hints at an intriguing commission in the fifties which called upon Searle to contribute to a top secret 'psyop' military operation!
As I related in my report on that first meeting with Searle:

'Searle's reputation as a draughtsman also got him involved in an international political situation-the Suez Crisis of 1956. He was placed under the Official Secrets Act and 'requested' by the War Office to take part in a 'mission'. Stationed at Suez Operations HQ in Cyprus he was part of a five man team in the Department of Psychological Warfare.
Unable at the time to tell even his wife where he was going he still seemed reluctant to discuss details. Serving seven years in the army during & after World War II meant he was qualified as a military man but he refused to re-enlist & chuckled at the memory of being the sole artist in a group including an SAS commander & a pilot. These rare propaganda pamphlets are hard to find these days except probably in Egyptian flea markets!'
These pamphlets were written in Arabic (uncoded) but ultimately never desseminated. 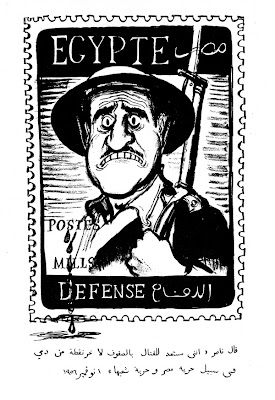 Nasser said: "I am ready to fight until the last drop of blood for the freedom ... of Egypt and the Egyptian people" 1st November 1956 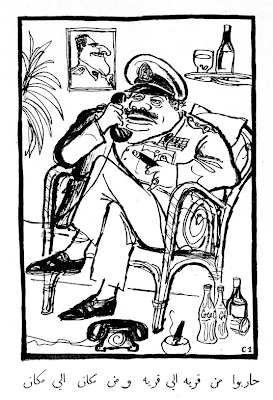 "On 26 July 1956, Nasser announced the nationalisation of the Suez Canal Company. This created an international diplomatic crisis that culminated in a disastrous military adventure by Britain and France in association with Israel. It ended in a humiliating ceasefire in response to widespread international condemnation.
During the Suez crisis in 1956, the cartoonist Ronald Searle was commissioned to do the art work for a set of leaflets that was to be dropped over Egypt in 1956 in support of the invasion by British and French troops. This leaflet shows Nasser cowering in his trench as the shells burst around him." 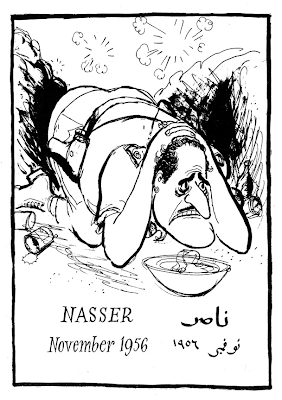 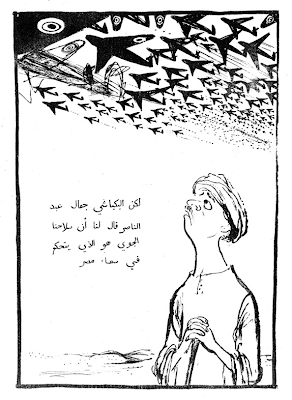 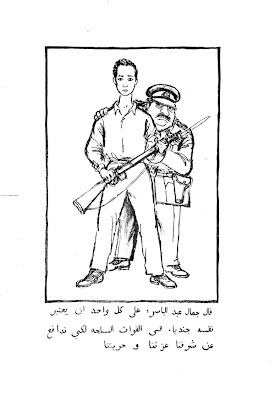 Jamal Abdul Nassir said: Each one of us has to consider himself a soldier in the military...to protect our honour, pride and freedom


In his appreciation of Searle's career and their friendship David Arkell wrote:

"In the course of my delving into what is visible of the man I have known for (my God, can it be?) forty years, I find that there is in the archives of the Ministry of Defence, a copy of a letter written to Searle in January 1957, by General Sir Charles Keightley, GCB, KBE, DSO, Commander of Allied Forces, Port Saïd Operations (Suez War), which reads:

Now that the Allied operations in the Middle East are over, I would like to thank you most warmly and sincerely for the services which you rendered. I was especially grateful to you for coming out at such short notice and being ready to do so much to help us.

The fact that the operations ended as quickly as they did does not detract from my personal gratefulness to you.  With my best thanks, and with all good wishes for the future.

Our Ronnie? Up there among the Suez brass? Are we seeing only the tip of the iceberg?

*When I tackled Searle about this somewhat intriguing discovery, his reply was: that it was an extremely subtle move. That if Nasser came to hear that he (Searle) had joined Bernard Fergusson's staff in the Department of Psychological Warfare at HQ Cyprus, he would die laughing - which would of course, make it much easier to take the canal. I pass that on for what it is worth." 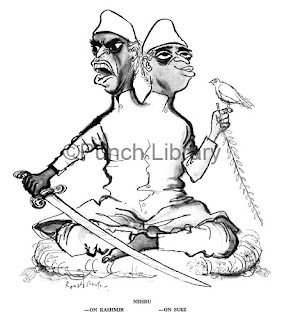 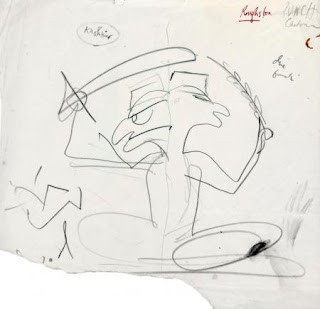 'Under Nehru's Foreign Policy, India's voice was heard by super-powers, on the global stage. Even though India was militarily and economically weak. This cartoon from a British magazine shows Nehru's position on Suez rankled in Britain. Kashmir was a part of India - and Suez was NOT a part of Britain, but a part of Egypt. (Nehru - on Kasmir - On Suez; artist: Ronald Searle. Published in Punch Magazine 23 January 1957. Cartoon source and courtesy - punchcartoons.com)'

In August-September 1947, Searle and four other British artists spent three weeks in Yugoslavia at the invitation of the Peoples’ Youth Railway project, linking Šamac to Sarajevo. Joining the 460-strong British brigade they drew and painted in Bosnia, Croatia, and Serbia. The groups' drawings and paintings were  exhibited the following year at the Leicester Galleries in London.  Five of Searle's drawings were published in 'The Railway: An Adventure in Construction' (1948).

Paul Hogarth writes in his autobiography:

“In the spring of 1947 I was asked to select four artists to record the building of a railway in the wilds of eastern Bosnia, then part of Yugoslavia.  At once I thought of Ronald Searle, who was becoming known through the pages of Punch and Lilliput.  His remarkable chronicle of life in Japanese prisoner-of-war camps had made a big impression on the public, and had he not helped to build another railway, a railway of death?  Still gaunt from the experience, he looked like a Grunewald Christ.  The other members of the group were Laurence Scarfe, who represented the English pastoral tradition of topographical watercolour painting; Percy Horton, the distinguished tutor of drawing at the RCA; the art historian Francis Klingender; and myself. 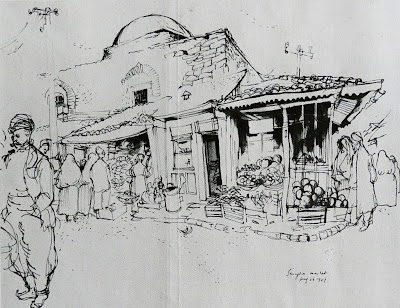 We departed in high spirits and, after an arduous train journey, finally arrived at Llubljana, the Slovene capital, in the sweltering heat of August.  The next day we began a demanding week drawing in the souks of Sarajevo and Zenica, before continuing to the construction sites of the 'Youth Railway', where we drew brawny, sun-bronzed students, wizened peasants and smooth-talking officials. . . 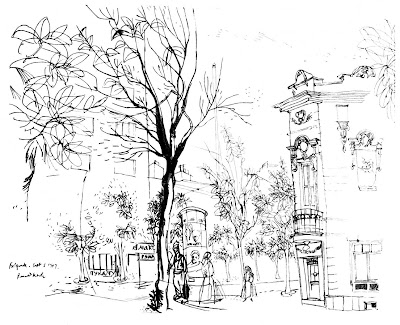 ". . . Inspiration on the trip did not come from our subject matter, but from Ronald Searle himself. His appetite for drawing was prodigious and totally undiminished by travel or fatigue. He would produce three or four large ink and wash drawings of construction scenes each day, plus numerous figure studies in pencil or conte. At night he would update his journal. It was the first time I had become acquainted with a working artist of my own generation and we became good friends. The business of getting to grips with the reality in front of you was not something that had been taught at art school,and seeing Searle work, I realised that this was something I had to master." 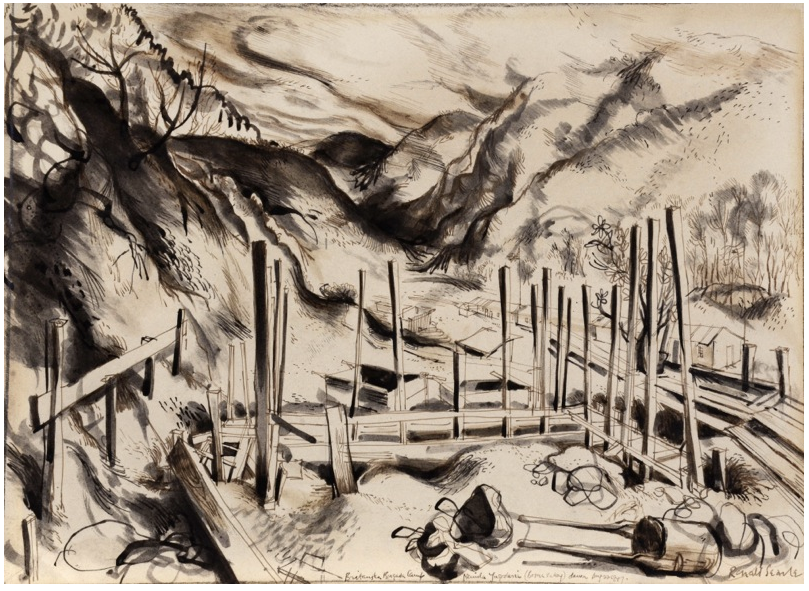 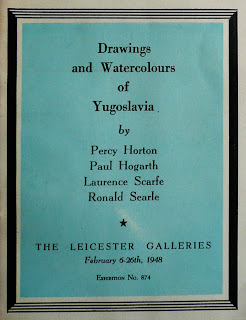 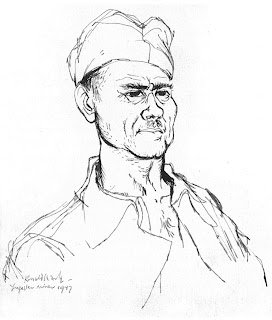 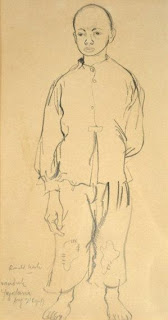 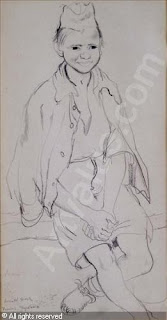 'Study of a boy, Vvduduk' 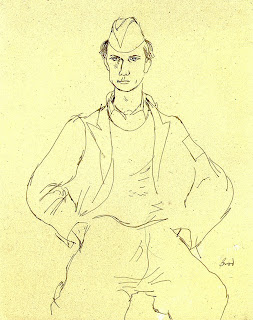 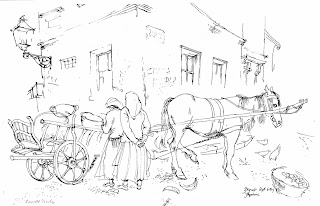 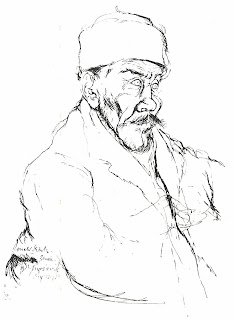 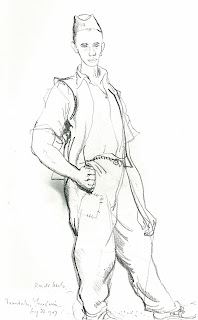 In a review of the exhibition dated February 20th, 1948 the 'Spectator' remarks on the drawings "by Ronald Searle, whose impressive graphic facility sometimes recalls the early John" - Augustus John I presume.

'Passport to Peking' by Patrick Wright

Our Time Volumes 7-8
Studio International Volume 137
The Spectator Volume 180
Posted by Matt Jones at 12:25 AM 2 comments:

On what would have been Ronald Searle's 92nd birthday another amazing tale from Searle's wartime days as a POW is revealed. The Daily Mail has the scoop on a batch of early Searle cartoons discovered on the 'Antiques Roadshow' 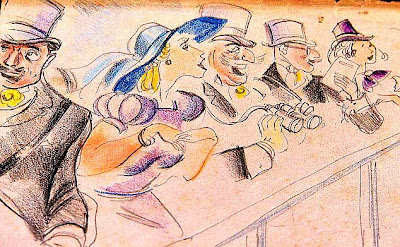 It's often hard to discern early cartoons such as these as Searle's- if it weren't for the signature I would dismiss several as not authentic.  However there are typical elements that would evolve into Searle's later style; elongated figures, heavier shading on one side to define form, 'left-handed' shading, not to mention a wicked eye for exposing the class system. 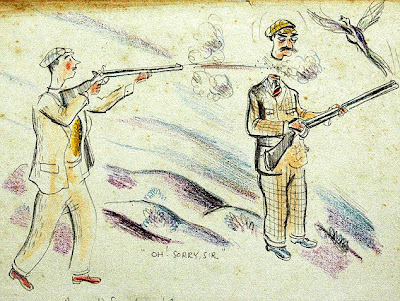 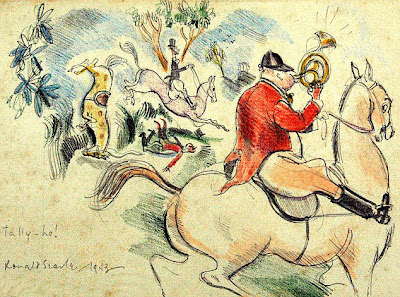 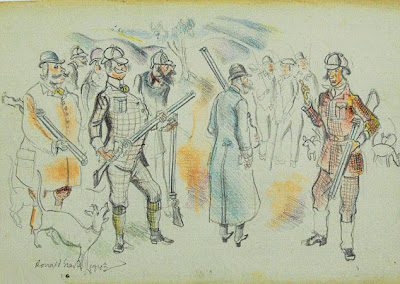 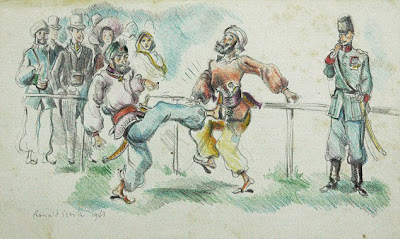 "Depicting typical British scenes of the time, they were intended to bring hope to his companions, many of whom were on the brink of death.


One colourful sketch captures a day at the races, while another depicts a plump landowner with his hunting party.
Another appears to show an Elizabethan court, while a fourth shows cavemen on horses with the joke, ‘Definitely the first polo match!’
The cartoonist, who died two months ago, entrusted them to the camp’s senior officer, Major Patrick Malins, who kept them with his own journal.
His family discovered the mementoes only after the major’s death and they will be shown for the first time on Antiques Roadshow tomorrow.
Pauline Malins, the late major’s daughter-in-law, showed the cartoons to programme experts when they visited Lulworth Castle, Dorset.
She said: ‘It must have been what kept them going – the distant hope of one day returning to life back home in Britain’
Antiques Roadshow: Sunday March 4 on BBC1 8pm."

"Pauline Malins brought along some sketches by Ronald Searle, who was in the same Japanese Prisoner of War camp as her late father-in-law, major Pat Malins. Book expert Rupert Powell was fascinated to see them along with Pat’s diary – but to find out the value you’ll have to wait until the second compilation from Lulworth, later in the series."
Posted by Matt Jones at 5:25 PM 4 comments: