The Wilhelm Busch Museum of caricature in Hanover, Germany celebrates Searle's 90th birthday with an exhibition running from  28.02.2010 -  31.12.2010.  The museum houses Searle's personal archive of his own work and also his collection of classic caricature by Rowlandson, Gilray, Caracci et al.

Matthew Davis has written an extensive article on Searle's career.  Well illustrated, you can read it on his blog.
Posted by Matt Jones at 8:58 AM 1 comment:

The strange case of the prisoner of St Trinian's


Not long after Searle celebrated his last milestone decade this article by Miles Kington appeared in the Independant:

'RONALD SEARLE turned 80 years old not so very long ago, and his biographer Russell Davies was asked on Radio 4's Front Row to sum up Searle's reputation today.  His reply was blunt.
Searle has two reputations, he said. One is the reputation he enjoys on the continent, where he is considered to be a very fine artist who has long ago outgrown his roots as a cartoonist.
The other is the reputation he has in Britain, where he is still remembered chiefly as the person who invented the girls of St Trinian's. Not many people, he said, know anything about what he has done since then ­ and that was 50 years ago!


I felt quite proud at that moment, because I knew at least one thing he had done since then. It was a cover for a book of mine, a selection of translated pieces of the French humorist Alphonse Allais. I could think of other things Searle had done since then ­ books, prints, paintings, illustrations ­ and I had even read the life of Searle by Davies, so I could remember vividly his account of how deeply Searle came to hate the whole St Trinian's trap.


He had first started drawing the girls in the mid 1940s, and 10 years later already felt imprisoned in their success. It's not uncommon for cartoonists to be stereotyped (Thelwell's girls on ponies, Giles's family and Granny) but they usually accept their fate and the money that goes with it.


Searle rebelled. At first he rebelled by sharing the load with someone else. When humorist Timothy Shy (real name DB Wyndham Lewis) suggested to Searle that he, Shy, should write an entire novel set at St Trinian's, Searle agreed quickly; it meant that he wouldn't have to think of any new ideas, just illustrate Shy's ideas. The book, The Terror of St Trinian's, came out in 1952, dedicated, rather unexpectedly, to Max Beerbohm, and did very well, but Searle was still determined to kill the girls off, and did so in 1953 in a book called Souls in Torment. In this book there was a last helping of St Trinian's drawings, labelled clearly "ST TRINIAN'S 1941-1953", in which Ronald Searle explained that the school had been blown up by nuclear experiments and would not be reappearing in his drawings ever, ever again.

Searle kept his word (unlike Conan Doyle with Sherlock Holmes), and there St Trinian's might have ended had it not been for the first St Trinian's film, which appeared the following year, and with which Searle had nothing to do. How he must have cursed this spectre clambering out of the grave! Never mind ­ he got on with his life, and other people got on with making increasingly feeble St Trinian's films, which had so little to do with Ronald Searle that they are not even mentioned in Russell Davies's biography.


Why am I mentioning all this? Well, because it would have been nice to say that when Searle turned 80, there were some celebrations over here. But apart from Russell Davies's little spot on Front Row, I noticed nothing. Was it really true that we British thought that there was no life in Searle beyond St Trinian's?


Then, last week, at last, I spotted a programme with the word Searle in the title, on Radio 4.
Alas, it was called Searle's Girls.
Alas, it was about nothing more or less than the girls of St Trinian's.
I listened to it, on the off chance that it was better than it sounded.
Alas, it was even worse.
Searle was barely mentioned. Oh, yes, we heard the story of how he started the drawings in the war, in and out of Jap POW camps, but almost immediately the film St Trinian's took over, and most of the programme was a gushing tour by Annabel Giles of endless clips from the increasingly dreadful St Trinian's films which would have been incomprehensible if you had never seen them, and which left you with the impression that Alastair Sim was somehow a lot more important than Ronald Searle.


Still, look on the bright side. It means there is still room for someone to do a decent programme on Ronald Searle.'

Miles Kington, The Independant Monday, 14 May 2001


Since then there has been one decent film on Searle-LionTV's 'Searle's Progress' presented by cartoonist Martin Rowson.
Films on Searle are difficult to track down.  Lion TV refused me permission to screen 'Searle's Progress' at the CTN-X animation festival in November. The BBC archive wouldn't grant me access to the 1975 Omnibus documentary 'A Step In The Jungle'.  On my last visit with Searle he dug out his old vhs copy & we watched it together.
There are films on Searle buried away in the archives of French and German TV companies too.
Searle told me that a French film-maker hopes to make a definitive documentary but is struggling to find funding.
Posted by Matt Jones at 4:01 PM 2 comments: 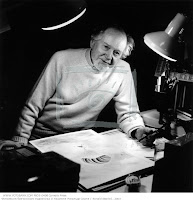 ‘To say he is an artist is no more than the truth, but he is more than that: he is our greatest living cartoonist with a lifelong dedication to his craft … His work is truly international, yet absolutely grounded in the English comic tradition.’
Steve Bell

‘I owe him a huge debt as an inspiration. In my workroom Ronald Searle’s books share the shelf with Rowlandson and George Grosz. He belongs with the masters in a great tradition.’
Posy Simmonds

‘He had a huge effect on me. I wanted to draw like him. His pen was always searching, exploring every nook and cranny of his subject. His exciting, electric style fascinated me.’
Gerald Scarfe


Ronald Searle celebrates his 90th birthday on 3 March 2010. Regarded as ‘The Master’ by cartoonists not only in Britain but around the world he is still drawing and continues to inspire cartoonists, illustrators, animators, film makers and artists in many fields. This exhibition shows 140 works from across his seventy- five-year career, from his early cartoons for the Cambridge Daily News in the 1930s to political cartoons for Le Monde in the 2000s. Many of the pictures have been lent by Searle himself. The focus is particularly on his reportage drawings which show Searle’s skill for capturing the essence of an event, character or situation.

From 1942 to 1945 Searle endured three and a half years as a prisoner of war of the Japanese working on the infamous Thai-Burma Railway. His 400 secret drawings, some of which he hid under the mattresses of prisoners dying of cholera, recorded life and death in the camps. Some of these fragile drawings are included in the exhibition. His experience as a POW transformed his life and formed the basis of his later reportage work. In the 1950s Searle captured life on the London streets, drawing sewer men and street sweepers, horse auctions and the funeral of George VI for the News Chronicle. In the 1950s and 60s he travelled the world for American magazines such as Life and Holiday. In 1961 alone he drew the Eichmann trial in Jerusalem and the newly built Berlin Wall.
As an observer of life Searle is unparalleled: his unerring eye for the surreal and the comic can be seen in his drawings - both entertaining and revealing - from America, Canada, Germany, France, Ireland and Casablanca. In Britain he is still best known for his St Trinian’s and Molesworth drawings, but these are but one tiny chapter in his career. This exhibition shows the quality and diversity of the work he has produced over his long life.

Throughout his career Searle has studied and collected the masters of the past – Carracci, Hogarth, Gillray, Rowlandson and Cruikshank – some of whose works are included in the exhibition, as are Searle’s medals dedicated to the ‘Fathers of Caricature’, which he designed for the French Mint.
In 1995 at the age of 75 when most people are enjoying retirement, Searle took on a new challenge when he was asked by the French newspaper Le Monde to draw a weekly political cartoon. He continued to do so until 2007 when cutbacks at the paper brought the association to an end.
As a mark of the great esteem in which he is held, a number of the world’s leading cartoonists and filmmakers have produced artworks in homage to Searle and written pieces for the exhibition catalogue: Steve Bell, Roger Law, Mike Leigh, Uli Meyer, Arnold Roth, Martin Rowson, Gerald Scarfe, Posy Simmonds and Ralph Steadman.
Ronald Searle has been closely involved in the mounting of the exhibition, lending artwork and drawing materials and assisting with research through an in-depth interview.
The exhibition is accompanied by a 160-page catalogue
The Cartoon Museum is open Tuesday to Saturday, 10.30 - 17.30 and Sunday, 12 - 17.30 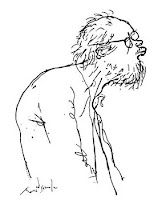 The Times have anticipated Searle's imminent 90th birthday with a new interview. Read it online here.
There's the chance to win a copy of a new book of Searle's drawings published by Inky Parrot Press.
Chris Beetles' Gallery, London will be celebrating too with a new exhibition. You can preview the show online here. 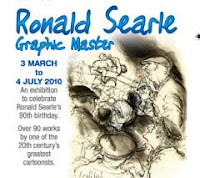 The Cartoon Museum in London is hosting a Searle retrospective.
There will also be a small exhibition of original drawings for The Hatless Man at Maggs Bros.  Antiquarian Books in London.
More details to come on both those events soon. 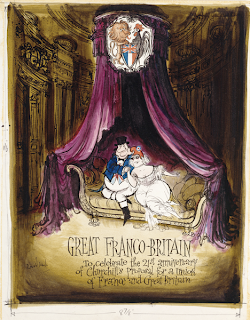 The Wilhelm Busch Museum, Hanover also has a Searle exhibition running from the 28th February.
Posted by Matt Jones at 4:16 PM 2 comments: 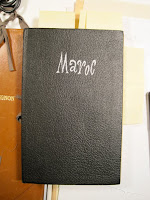 Searle's Morocco drawings for HOLIDAY were never published in the magazine although several made it into print in book collections of Searle's work. Here's a rare treat for Searle fans: photos of the sketches he made on location which were the basis for the worked up paintings. 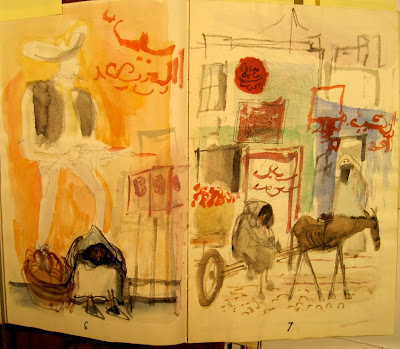 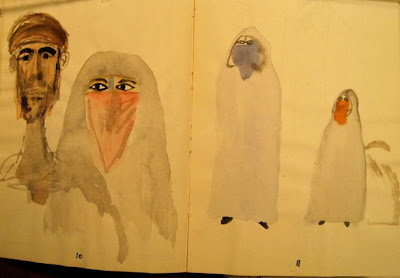 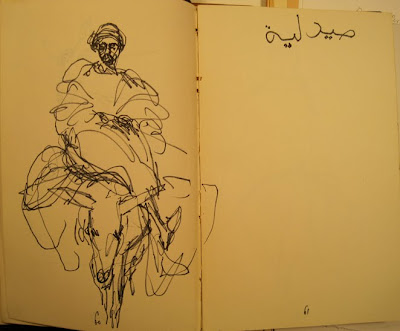 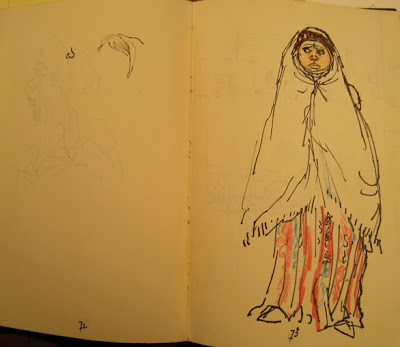 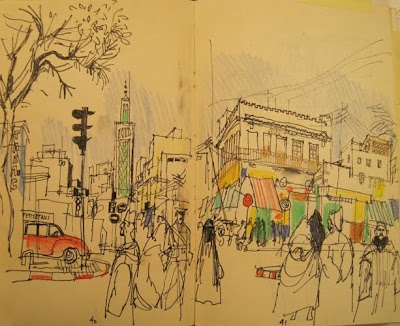 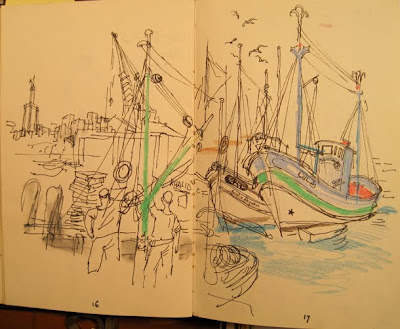 Back at his hotel in the evenings Searle would work up finished illustrations based on his location sketches, notes and ideas. 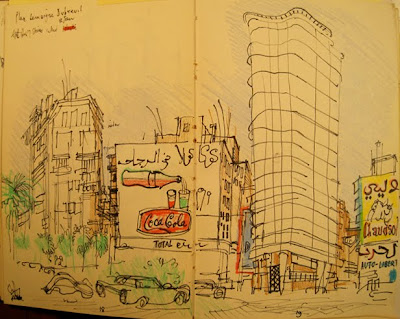 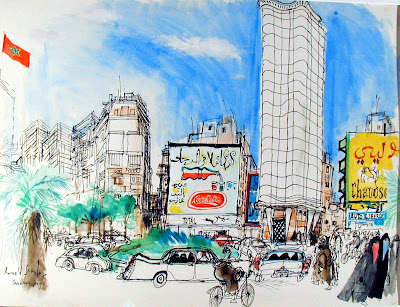 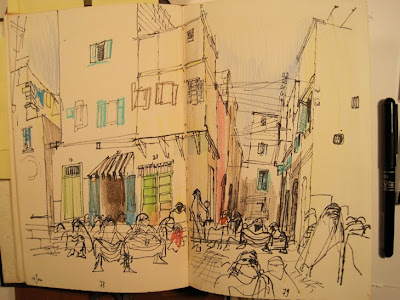 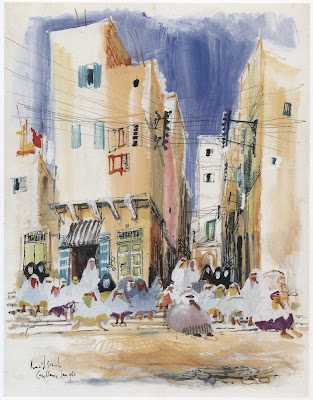 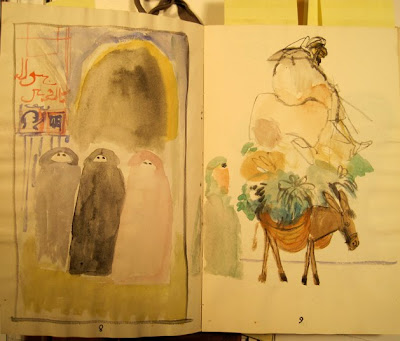 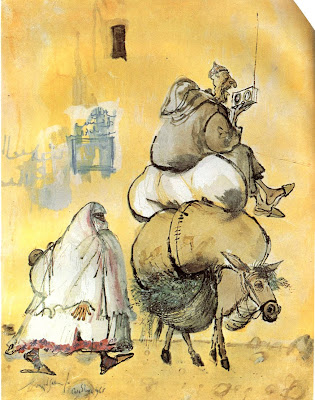 The Morocco series is quite atypical of Searle's style-featuring an even broader, looser stye than usual with watercolour washes used more than line-work. This is especially apparent in the next example, photographed from the original in the collection of Monica Searle. 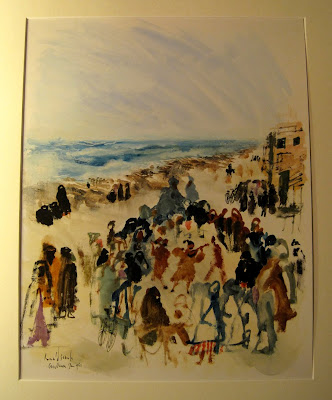 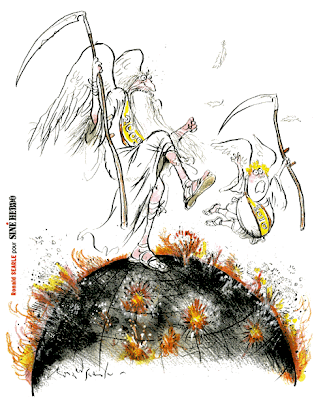 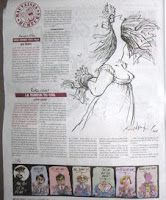 If there are any readers in France who may have Searle's illustrations for SineHebdo or LeMonde please email me at the address in my blogger profile. It would be great to see more of Searle's recent work.

A report on my latest meeting with Ronald Searle is up on my blog. I've updated the Lemon Hart Rum section.
Posted by Matt Jones at 10:23 AM 5 comments: