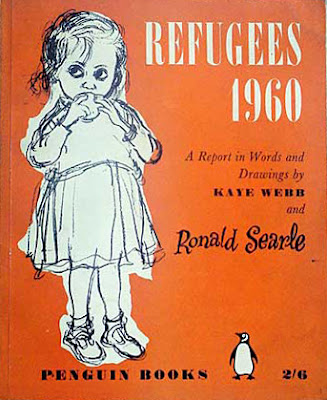 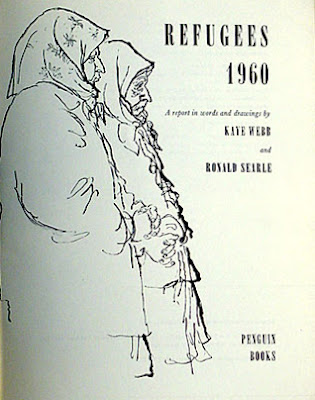 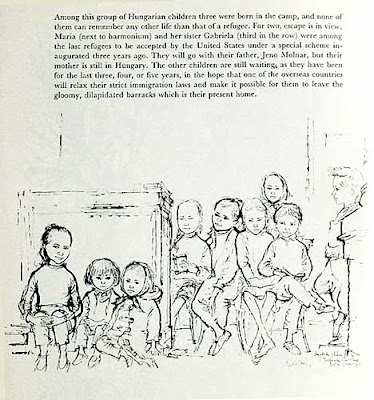 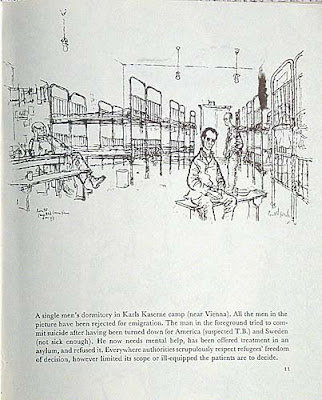 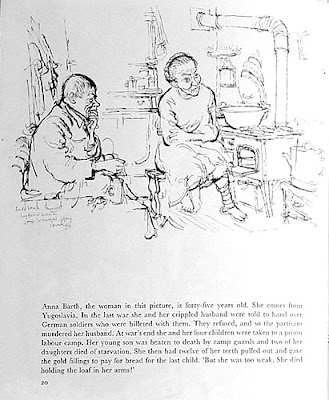 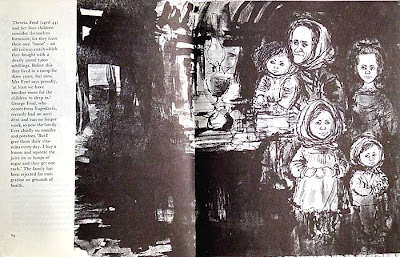 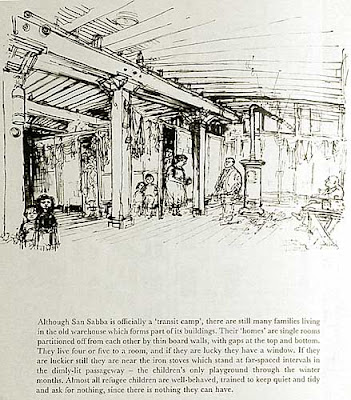 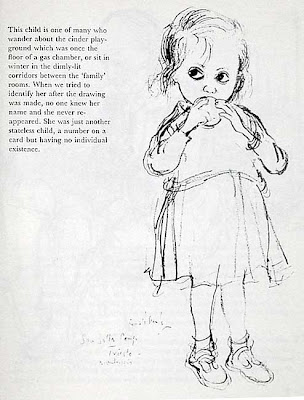 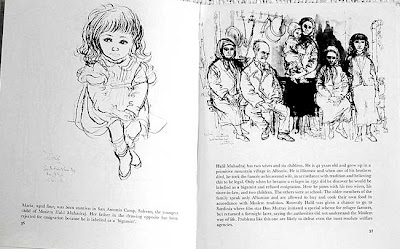 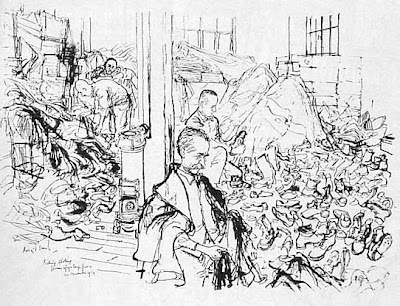 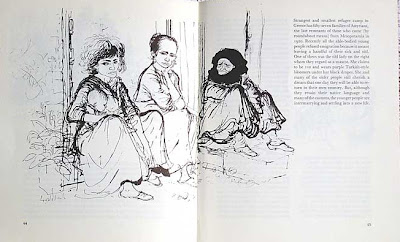 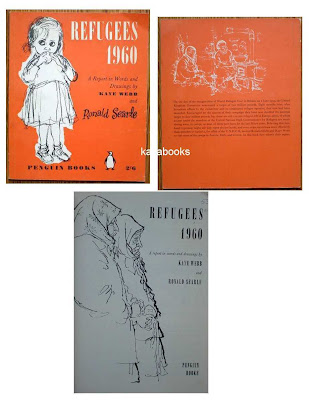 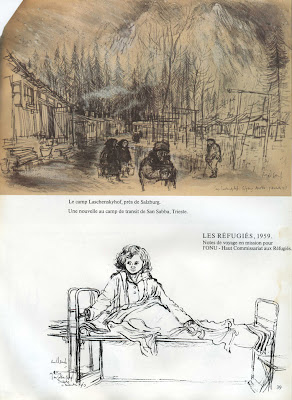 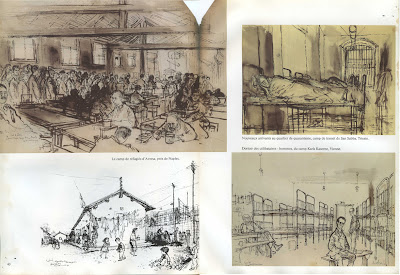 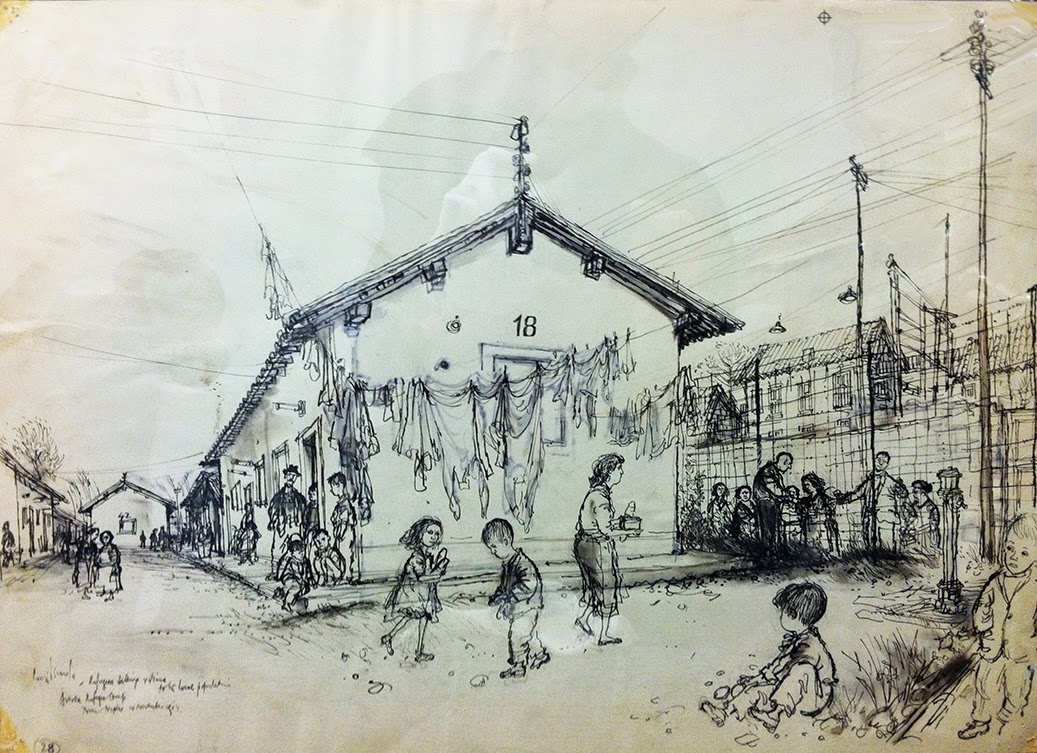 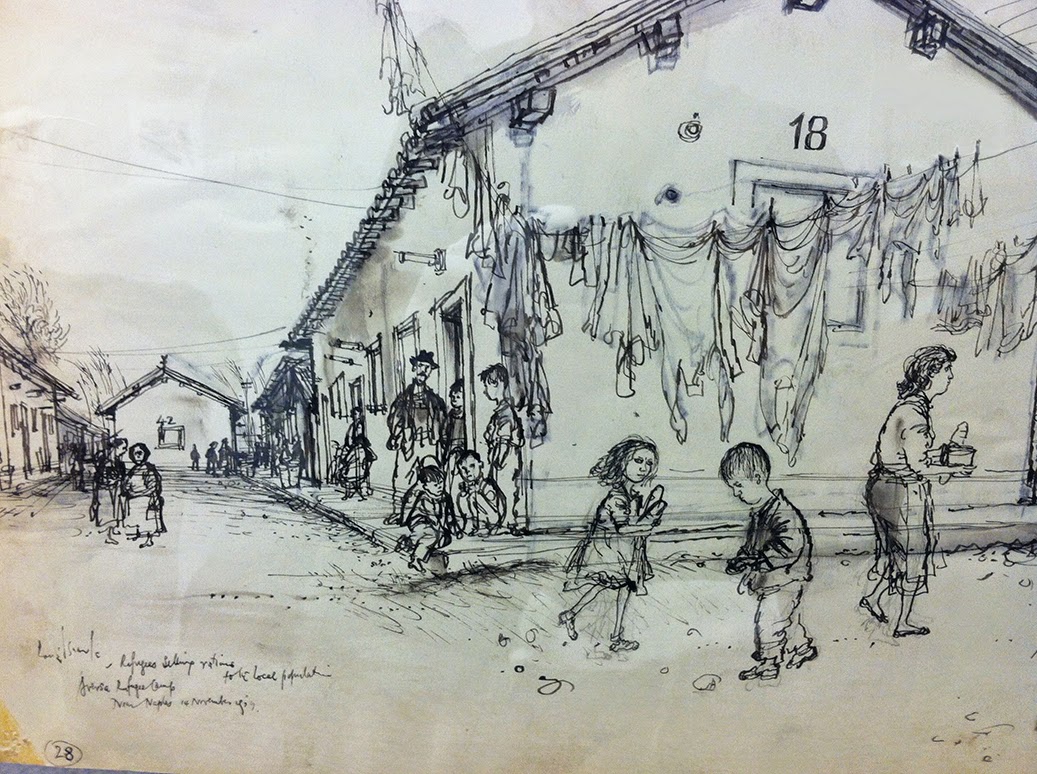 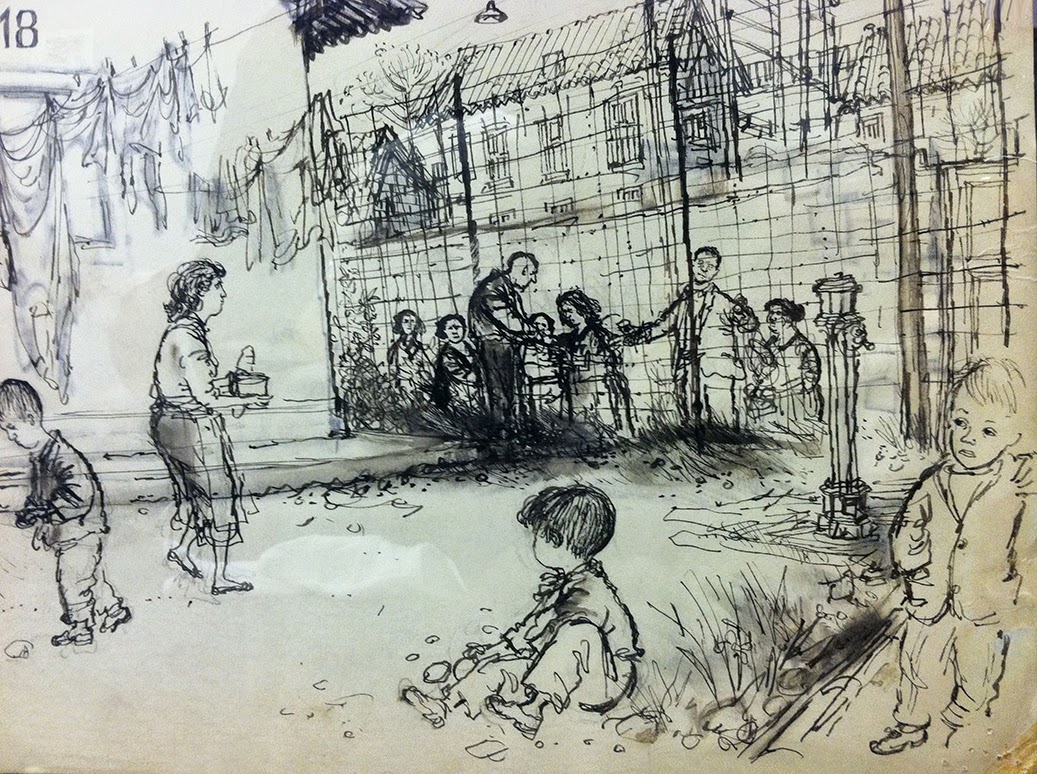 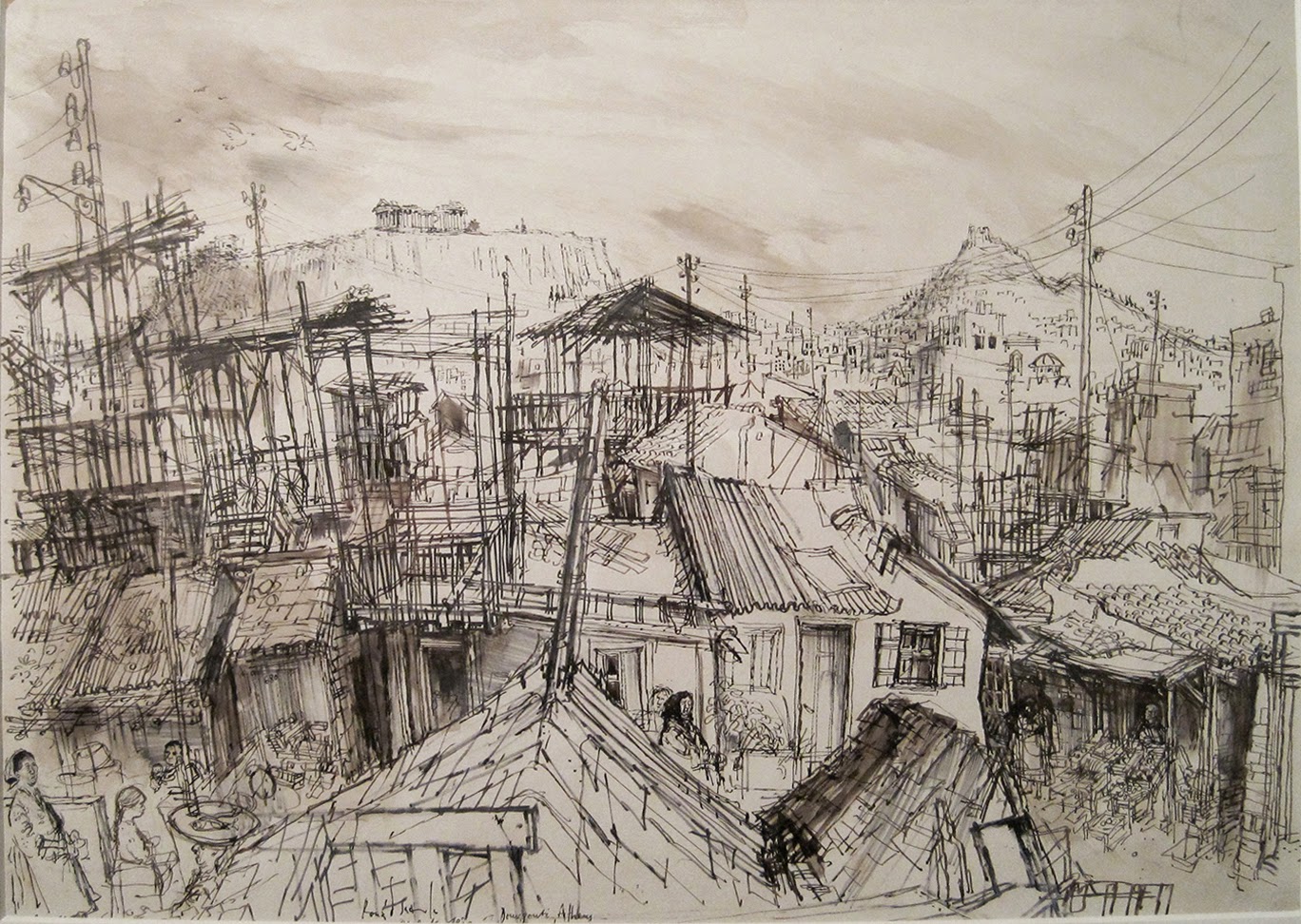 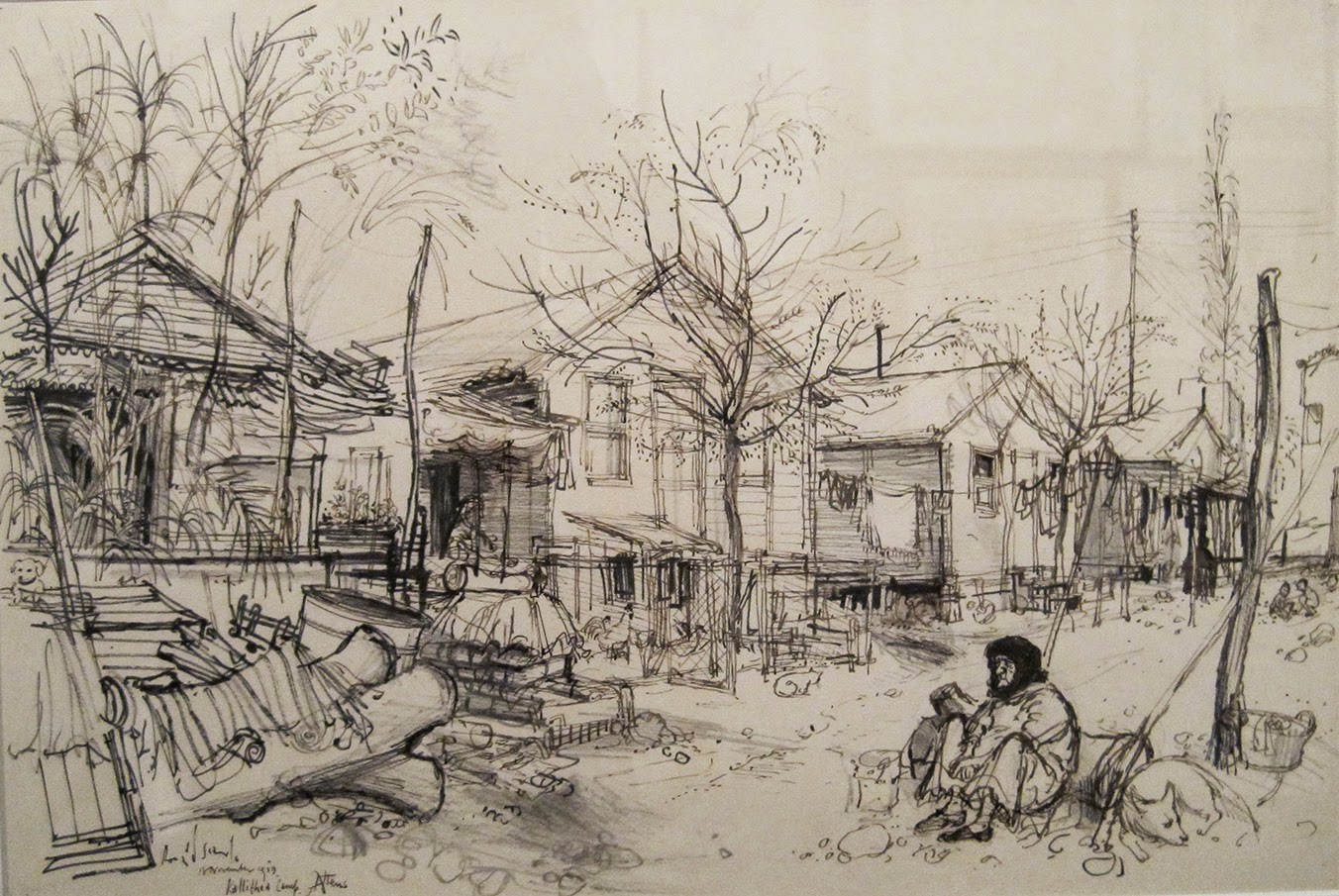 'Kallithea Camp, Athens' 1959
'As a film-maker, I find this drawing clever and exciting. Taken from a series of illustrations Searle did for a book called Refugees, 1960 to “promote awareness” of the state of world refugees, it’s a compassionate response to somebody’s pain and the dreadfulness of their condition. What’s great is the tension between the detail of the environment and the character. Learning about Searle at art school taught me that you have to have a clear overview or sense of the structure of a scene before you can work into the detail. Here, you get a tangible sense of the environment – bleakness, coldness, the poverty of it – and yet the tiny figure of the woman is such a strong presence. The detail of the character, the trees, is very clever. Each little thing balances the whole into a moment-to-moment filigree.'
Mike Leigh interviewed by Florence Waters for the Telegraph 2010 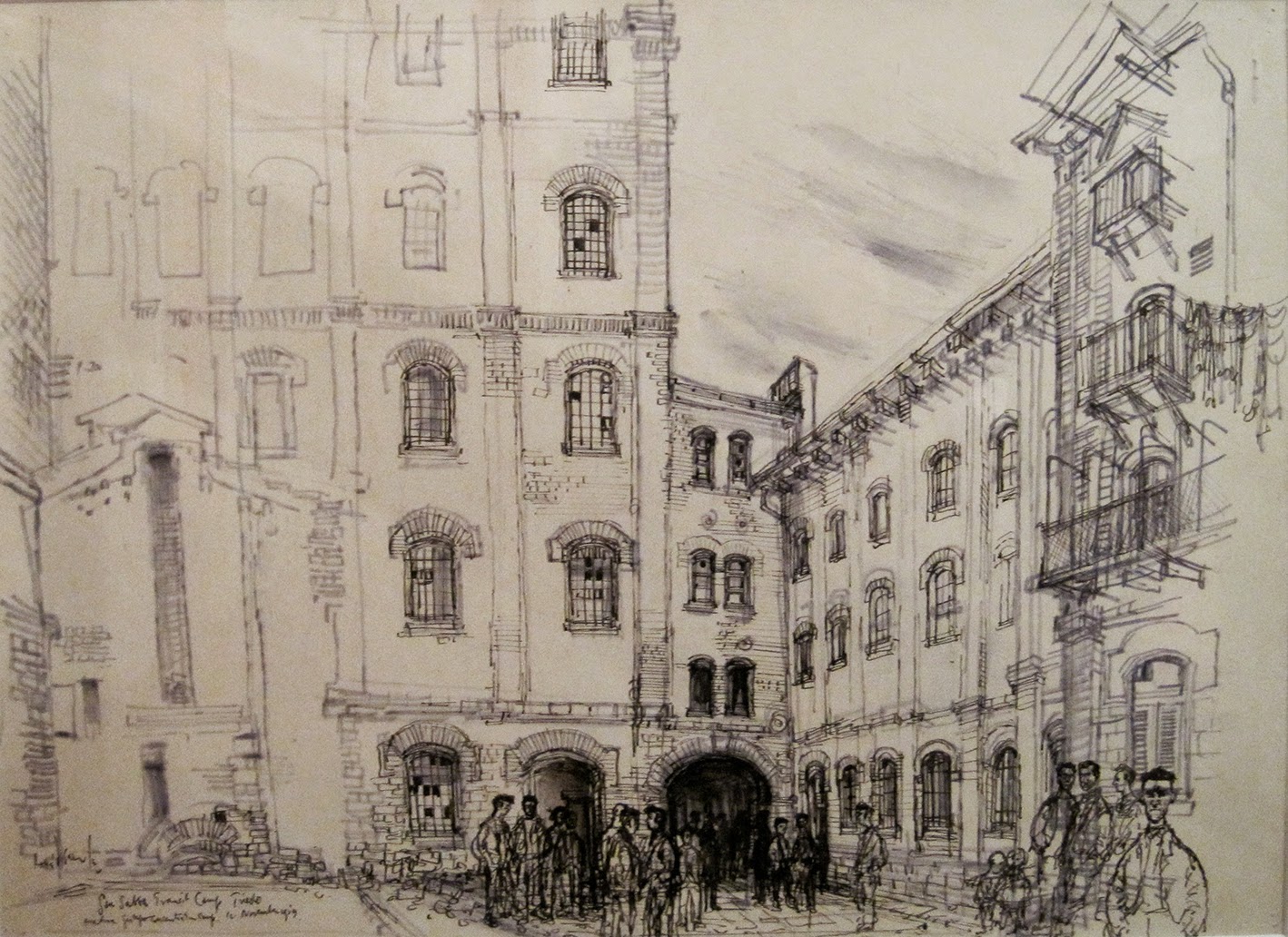 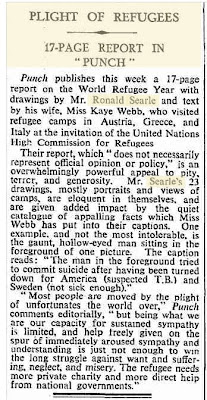 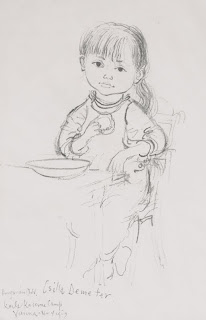 THE United Kingdom Committee has raised four million pounds for World Refugee Year —twice the amount originally aimed at—and no thanks to the British Government, which con- tributed a measly £200,000. But there are still 110,000 refugees left in Europe alone, most of whom have been in camps for the past fifteen years, with little hope of anything better, and their needs will not end with the end of World Refugee Year, which is now very close.  So there is every reason to help them further by spending half-a-crown on Refugees 1960, 'a report in words and drawings,' by Kaye Webb and Ronald Searle, published this week by Penguin Books, who are forgoing their profit on the venture, as are the paper suppliers, printers, bookbinders and booksellers, so that all proceeds, after the bare cost of production, can go to the United Kingdom Committee.  Author and artist visited a number  of refugee camps in Austria, Italy and Greece last winter, and they have been moved by what they saw and heard to do their best work : the tot is instinct with pity and irony, and in the drawings of refugees it is the eyes that haunt the reader, as they must have haunted the artist.  All We can do individually is to contribute our half crowns; it would be easy, though. especially in 'these prosperous days of full employment  for 'British and Commonwealth governments to do more than that and open their doors a little less grudgingly. Kaye Webb writes : 'New Zealand wants to know if' we have corns.' one woman told me, and suddenly in the midst of our laughter I realised she was crying. Other inquiries on the medical questionnaire for many large countries of possible emigration include requests for information on 'the specific gravity of urine,' and whether the applicant has ever 'suffered from chilblains. 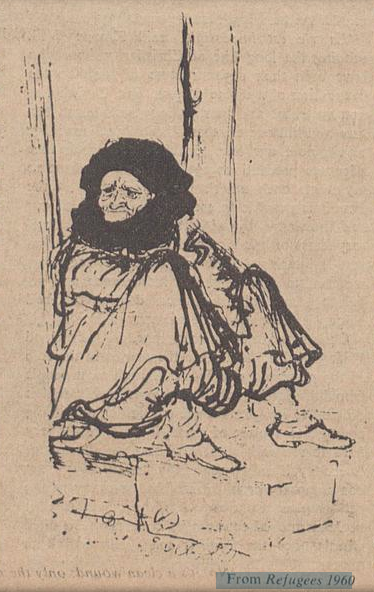 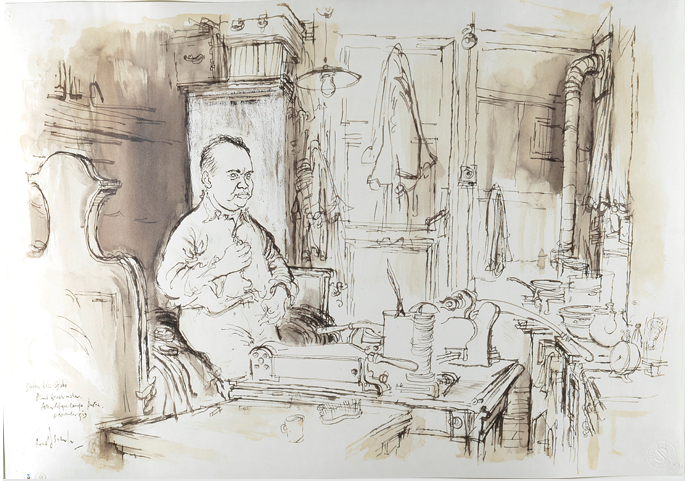 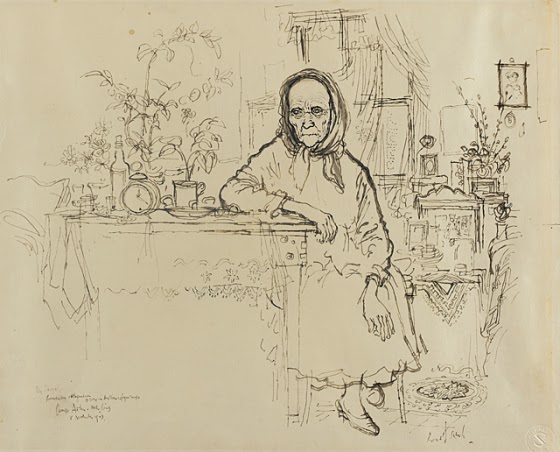