Ronald was fastidious about annotating and cataloguing his work.  Every original I've seen has been marked in pencil with subject or title, date and often the client. No other artist I've encountered has been so meticulous about recording their output-those charged with organizing his archive have most of the work done for them!

He kept a daily journal and was an inveterate correspondent, mostly by mail, then in later life with fax and email. During the 1950s to keep track of the insane, over-lapping deadlines for all the jobs he took on, he maintained carefully plotted charts.
The example below gives us an idea of just how many projects he had on the go at any one time- it never fails to surprise me how prolific Searle was!

'Nobody who visited the Bedford Gardens studio could fail to be impressed by Ronald's 'Deadlines' chart, a thing of terrible and complex beauty involving the interests of Punch, Tribune and the Sunday Express; Lilliput, where the Patrick Campbell series continued (there were Campbell books, too); a sequence of ephemeral magazines of the Left (Circus, Seven, Our Time), in which Paul Hogarth was involved; and any number of more or less specialist publications, from The Bookseller to W. H. Smith's trade circular.'      - Russell Davies

Searle's prolific output during the 50s was formidable but he couldn't take on every offer of work. The social circle he moved in at the time must have yielded countless commissions such as this one from actor Tristan Jellinek: 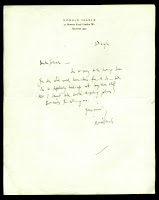 
I'm sorry to be turning down your idea which would have been fun to do - but I'm so hopelessly tied-up with long term stuff that I daren't take another tempting job on!
But thank you for asking me.
Yours sincerely
Ronald Searle

Commissions like menu covers may seem trivial but were probably quick to do and paid relatively well. I've seen several Searle illustrated menus for private dinners and events.

The Omar Khayyám Club in London was established in 1892 by Frederic Hudson, Clement Shorter and George Whale.  Jack Walter Lambert (1917-86), literary and arts editor for the Sunday Times & author.

I just read that passage in Davis' book. Great to see Ronald's to do list, I wonder if he got everything done.

I doubt it-I think he still had to do lists at 91!

OK, that's it!!! I'm taking the rest of the day off and I'm going to make a big list on tracing paper and stick it on the window.- thanks for the inspiration Matt!