Searle first visited Morocco in March 1951 and a handful of the sketches he made were published in the broadsheet News Chronicle March 28th. I believe he was traveling with his first wife Kaye Webb and it is probably she who penned the accompanying dispatch (as she did for their reports on London for the same publication).


'We saw our first  yashmak in Tangier; the international port where taxes are low and a ten-roomed house sells for 15,000 pounds.
The Arab shop in the souk (bazaar) burst with Swiss watches, French perfume and American shirts, nylons, watches and fountain pens. Great Britain is represented by chocolate and sewing machines.
In Tangiers' market place, the country-women from the Spanish zone, their babies tied to their backs underneath shapeless white haiks, sell flowers, vegetables, much-handled bread and sweetmeats. The men, bearded and turbaned, gather entranced as children round the story-tellers on the square.
The narrow streets are bursting with boot-blacks, vendors, begging children, pickpockets and donkeys so loaded that we cram into noisome doorways to let them go past. . . 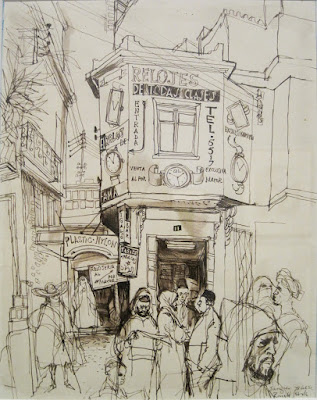 'In Fez the Arabs retain their dignity and their privacy in their thousand-year old walled city. Tourists gape at the wonderful golden marriage belts, the elaborately ugly copper bowls, the tooled leather blotters and admire the pretty, friendly children. They have no way of guessing that they are ridden with tuberculosis. . . 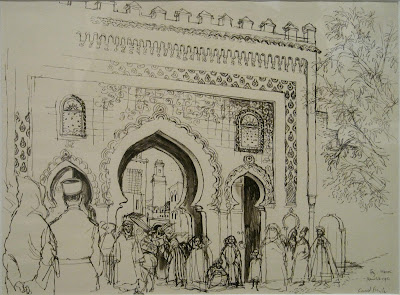 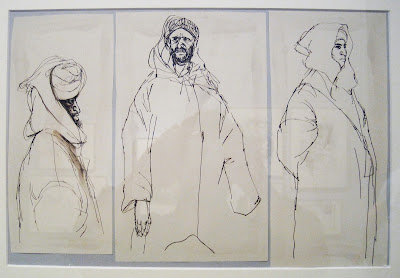 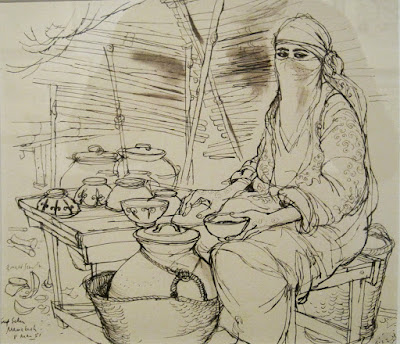 In Marrakesh, El Giaoui's country, the people are gayer, lazier, more corrupt. The white clothes are replaced by brilliant jellabahs. There are more bicycles than donkeys and the famous Place Djemaa el Fna is teeming with snake charmers, musicians, dancers and storytellers from breakfast time until nearly midnight. At sunset their their noise reaches a crescendo and drowns the voice calling the faithful to prayer from the nearby mosque - and we never saw any of the audience turn towards Mecca.' 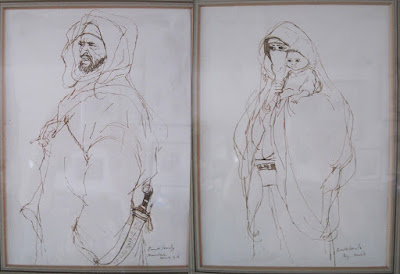 In 1965 Searle returned for a reportage assignment to capture in drawings Casablanca for HOLIDAY magazine. The format allowed him to use colour and a couple of the pictures he made even drop his trademark linework in favour of impressionistic swatches of colour. These pictures are among my favourite of Searle's ouvre. We can see how is style has developed over the intervening 14 years.
On one visit to Searle's studio he permitted me to photograph the original sketchbook he kept on the '65 trip to Morocco and I present them here with the corresponding finished pictures (which were not all published by Holiday). 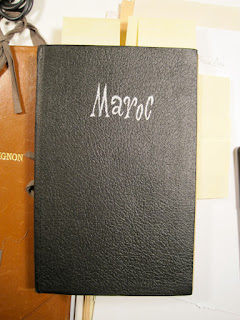 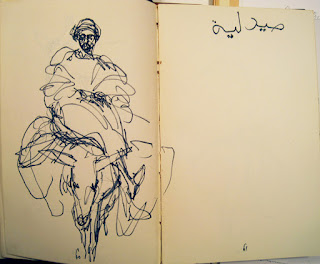 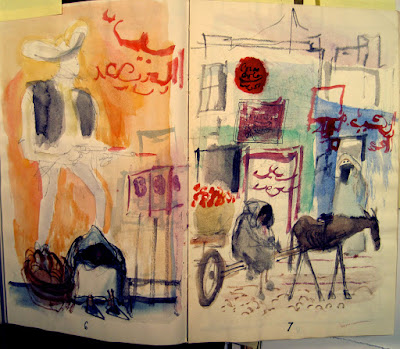 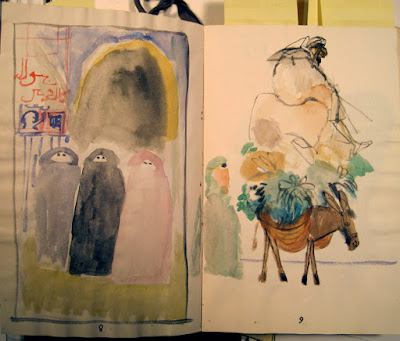 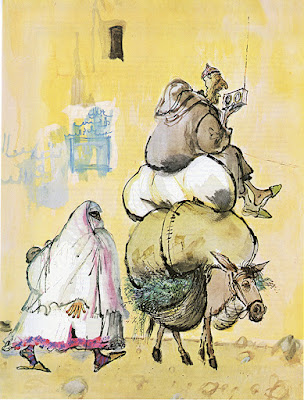 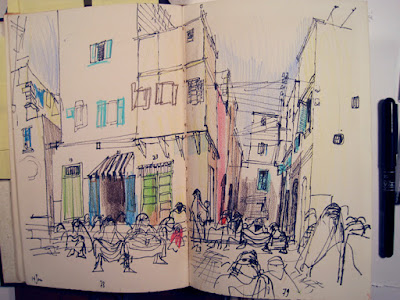 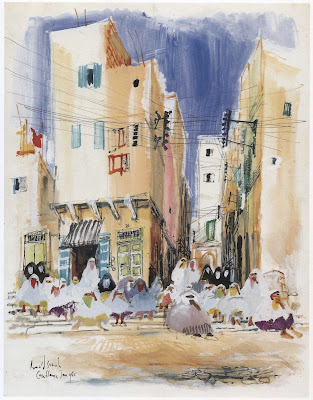 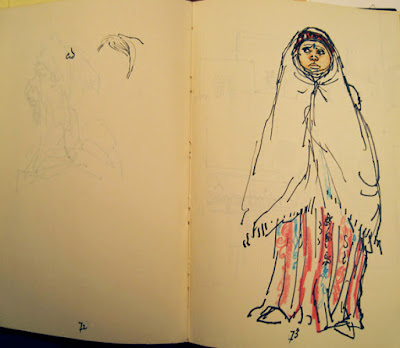 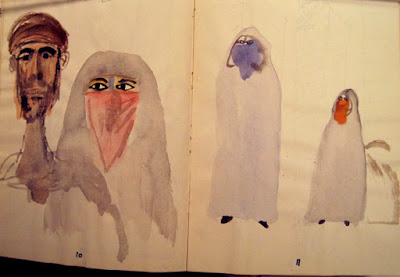 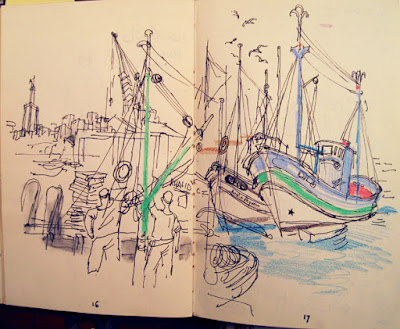 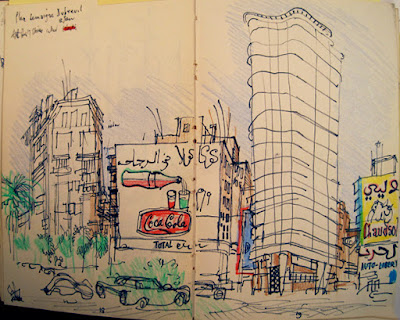 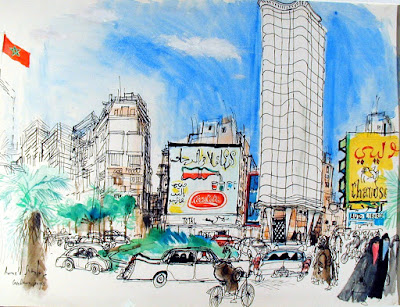 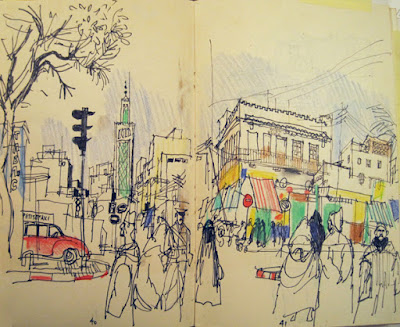 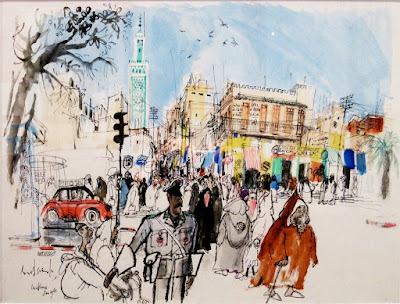 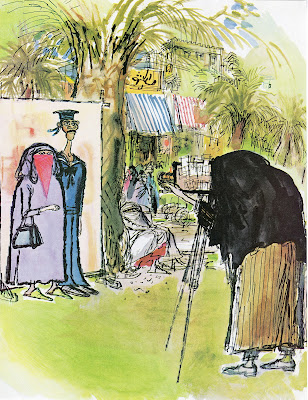 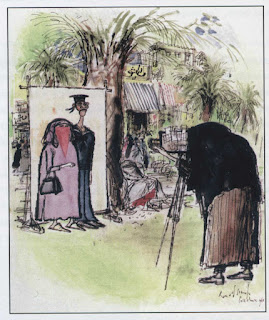 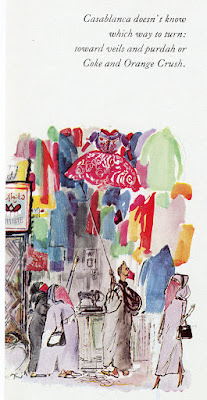 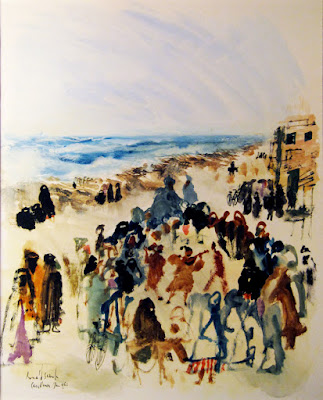