How Ronald Searle drew the Romans 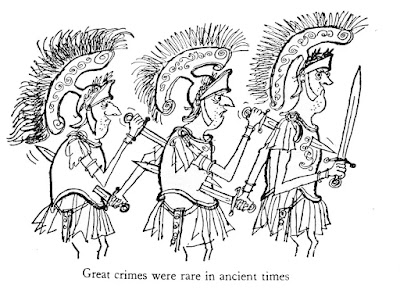 'Don’t meet your heroes, they say. Unless they’re the sublime artist and cartoonist Ronald Searle, I say. I had the great thrill of interviewing Searle (1920-2011) on his 90th birthday in 2010. In his tower house, high in the Provence hills in France, he told me how he’d created my anarchic pin-ups – the wicked girls of St Trinian’s – and Britain’s naughtiest schoolboy, Nigel Molesworth, the Curse of St Custard’s School.

What a joy it is to have one of his drawings on the cover of my book – a collection of the best Latin lines, from “Veni, vidi, vici” to “Carpe diem”.
No cartoonist captured ancient Rome better than Searle. The cover image comes from the second Molesworth book, How to Be Topp, published by Searle and the writer Geoffrey Willans in 1954. The drawing came in a series of “Grate Roman Lies” – Molesworth was a terrible speller. This particular lie was called “Great crimes were rare in ancient times”.
Searle and Willans wittily made the Romans suffer from modern troubles. One cartoon shows a shattered centurion being nagged by his wife and hounded by his dog and wailing infant son. They made the dry rules of Latin funny. One cartoon series – “The Private Life of the Gerund” – treated the obscure verbal form as a pompous, anteater-like creature.
Searle told me how he and Willans worked. “Geoffrey set up the framework but he gave me space to make it visual: to work out what animal the gerund would look like; how the Romans and the Gauls looked; the feel of the foopball ground, as Molesworth called it.”
He added, “Anyone can do a cartoon and make people laugh.”
Not true. And certainly not true of cartoons about the Romans.
by Harry Mount in The New Statesman
Posted by Matt Jones at 4:31 PM