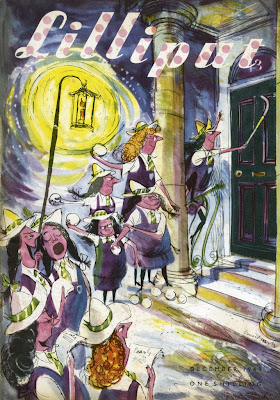 The Guardian Unlimited website regularly carries a "from this week in history" feature and today's (25 November) is a brief piece on cartoonist Ronald Searle.


A change of tack from St Trinian's
Although it is 15 years since Ronald Searle last sketched the spindly ankle and leering eyeball of one of his pigtailed horrors from St Trinian's, a drastic effort to dissociate himself from them has never succeeded. "People are convinced that I am still producing them," Searle, who has settled in Paris, said. "It's baffling. Not too many people could really have seen them. I produced about one a month between 1946 and 1951, and then packed it in. The films helped to keep the image alive."
The interment of St Trinian's was the beginning of a break with his past. A few years later he broke completely with his life in England, he separated from his first wife, signed over all his royalties to provide for their two children and came to Paris to start, financially, from scratch.

Now married again, aged 47, he has built up a new career, contributing to the "New Yorker" and "Holiday" doing travel books and organising exhibitions of his work in Europe. An exhibition of his cat drawings has just opened at St Germain des Prés. They are not pretty, cute cats with glossy furs, but vilified, spiky-haired individuals with doubts about the universe. Cats with a wrinkle of anxiety in their smeared eyes; harassed cats, cats shrinking from some menace (such as having discovered the truth about their own libido).

To imbue cats with human feelings is a logical outcome of drawing on one's own experience. When the girls of St Trinian's gleefully hung a schoolmistress by the thumbs, Searle was drawing on stark images from a Japanese prison camp. (As a Japanese magazine put it, "He took part in various battles until he was captivated by the Japanese Army.")

When he came back to Britain in 1945 editors snapped up his drawings of nasty little girls first sketched to amuse his fellow prisoners. "I had brought an element of horror into the public cartoon," Searle said, "and the climate was right for it." Within a short time his girls were helping to bring in an income of £25,000 a year. He now lives right in the student centre of Paris. "I find Paris keeps me in a continual state of excitement," he said.

[The French cartoonist] Sine, he feels, has cancelled himself out. "His magazine Sine-Massacre was inviting trouble. "He simply butchered the police, Government, army, and clergy. He just put himself out of business. His latest book, for example, is 60 pages exclusively devoted to lavatories. "I suppose you can pull the chain on the public, but I don't think it gets you anywhere."

Really? Can that be right? As there were five books, surely there must have been many more St Trinians cartoons...