I had the pleasure of meeting Mr Searle recently & will post a full article here soon. There is a brief report on our conversation over at my personal art blog.

In the meantime here is Gerald Scarfe's account of his first encounter with his mentor: 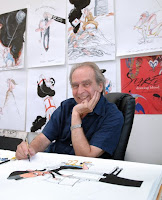 'I was a sickly child and so often absent from school. Drawing was my way of expressing myself and I knew I was good because despite my absences, I was famous in my Welsh school for drawing a great Welsh dragon. Being a cartoonist wasn't really a career choice in those days - it still isn't - but I remember admiring Walt Disney's work and then I discovered the work of cartoonist Ronald Searle. He was most famous at that time for St Trinian's and his cartoons in Punch and his work resonated with me at once. I took one look at it and knew this was what I wanted to do.

My problem was that I didn't know how to go about becoming a cartoonist - my father was in banking so I didn't get much encouragement there. When I was 14 I decided to take matters into my own hands. I lived in Hampstead and I found out that Ronald Searle lived in Bayswater. I decided I would cycle to his house and ask his advice. In my mind's eye I can still see his house - it was set back from the road with an arch-shaped green front door alongside which was a big brass doorbell.

I must have stood on that doorstep about a dozen times but was never brave enough to ring the bell. Despite this, Ronald Searle continued to be an invisible mentor to me - a beacon of what I could achieve. He was saying something through his cartoons either about politics or questioning what life is all about. There was a great truth to his work which I believed being an artist was all about.

I worked as a commercial artist for a while, which felt like I'd sold my soul to the devil - but I always yearned to emulate Ronal Searle. I sent cartoons to Punch and they were accepted immediately. When Private Eye began, Peter Cook and William Rushton encouraged my political cartooning and it was then that I could let myself fly. 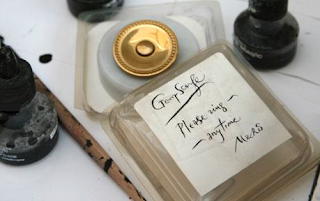 Four years ago, on my birthday, we were in France and my wife took me to a restaurant. It was deserted except for another couple ... Ronald Searle and his wife. It was the most wonderful surprise. On my place setting was the most beautifully wrapped gift. He urged me to open it and inside this box was a brass doorbell with a note attached which said "please ring at any time". He really is the most delightful man and I now see him every year.


Do I wish I'd rung that bell all those years ago? I don't know the answer to that, but I do know that I get up every morning and know how lucky I am to be doing a job I love.'
Posted by Matt Jones at 9:26 AM

i just read the article you posted on your other blog. WOW !!! what an honour to meet Mr. Searle.

..and again a huge thankyou for maintaining this blog. I am a huge searle fan. coming here is just an inpiration boost every time.

thanks so much
kindest regards
robin