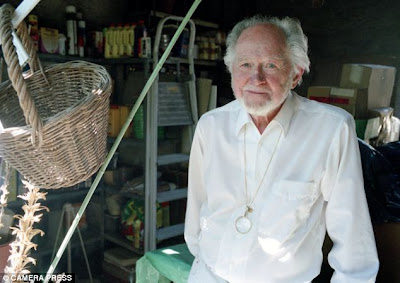 Photograph: Eamonn McCabe/Guardian
The inevitable day has come-I'm deeply saddened to report the death of Ronald Searle.  He passed away peacefully in his sleep on Friday 30th December, 2011.  Since the death last summer of his wife Monica, his health declined and now Mr and Mrs Mole are together again.
It was a joy and a privilege to have known the Searles-I'll write a full tribute soon . . . 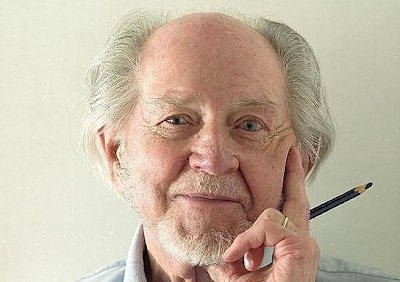 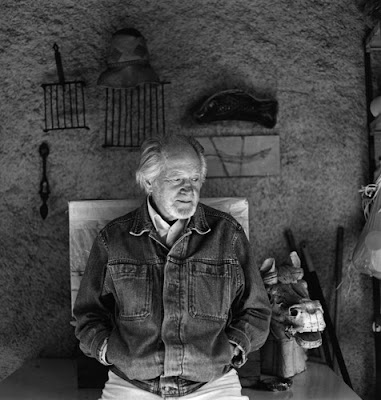 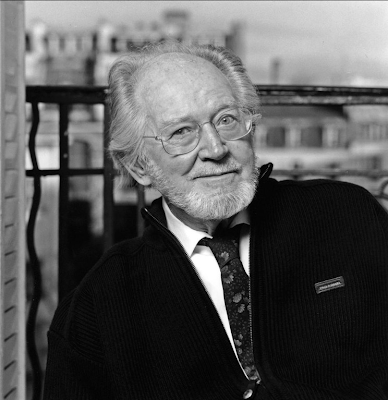 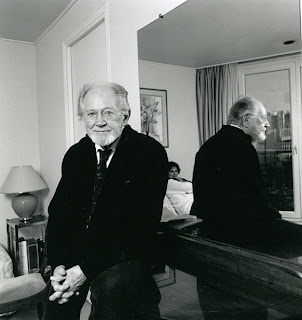 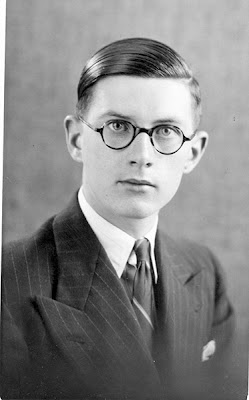 From a comment in the Guardian:
Glynyfran
"Let me add a personal story to all these tributes. In 1956 my wife and I attended the Ideal Home Exhibition, and Ronald Searle was there sitting and drawing cartoons of whatever was going on. I naively asked him how he gained his inspirations, he turned to me and said, 'just look around you'. I've never forgotten that remark, or the valuable advice it proved to be in my own life.
We all owe him a debt of gratitude for the pleasure he gave to so many people, pleasure that will outlast his life here as we continue to enjoy his many creations."
Posted by Matt Jones at 12:21 PM

McTodd said...
This comment has been removed by the author.
12:29 PM

I have just read of his passing on the BBC News website. Terribly sad, but your blog is a wonderful tribute to him, long may it continue in his memory.

RIP Ronald. A great influence and inspiration to many people.

R.I.P Mr. Searle. A sad day indeed.
I'll be pulling out the cork today.
And thanks Matt for this wonderful blog to visit.

I was so sad to hear of Ronald's death. The tributes I've read so far online have been really faithful, but I'm looking forward to reading yours. Keep up the good work on this blog.

So sad, we have lost an amazing artist..

Very sorry to hear of his passing -'though to be honest, it was only when I first discovered this splendid blog, that I became aware that the great man was still very much with us. Over the years I had gazed in admiration at his originals and prints in various exhibitions, always craving an example but never being able to afford one. Then last year I stumbled across an old letter to a lady, sent in 1947, which included beneath the message a drawing of a St Trinians girl drawing Mr Searle himself! I was obviously delighted but quite understood his stated opinion that he was fed up of being perpetually linked with them. I only hope he ultimately appreciated that this was because of the warmth and affection in which his creations were held by the British public...

Thank you Matt for this blog tribute- all the more vital now that Mr. Searle is gone.

thank you matt for this blog which I have just discovered.Have long been a fan of Ronald Searle since I obtained a copy of Down with Skool when I was about 12 which ws a long time ago. A man of great talent.Sad to hear of his passing.Geoff Thompson Adelaide South Australia

Seeing his stuff as a kid (along with Mad mag) inspired me to do this stuff we do...how bout a tribute of some sort..caricatures of the man?

Thank you Mr. Searle for everything. And thank you Matt for bringing Mr. Searle to CTN 2009 and for helping to share and keep his legacy alive forever. His line lives on......

....and I raise a glass of champagne in your direction. Thank you
~Tina Price

Tis a very sad day, indeed. He was the greatest cartoonist of our time and one of the best draftsmen of the last century. I am saddened I never got to meet the man, but I appreciate your reportage from the front lines as it were, Matt. And I am grateful to Tina Price for including me in presenting a gift to Mr. Searle on the occasion of his 90th birthday. Thank you, Mr. Searle, for the brilliance of your graphic masterpieces. Your wit and skill are peerless and we are fortunate you were so prodigious in your output. A brutal prison camp couldn't stop you, nor now will even death end the ongoing discovery of your genius by new admirers.

He will continue to inspire generations of illustrators and live on through his work and your wonderful blog.

RIP Ronald Searle and thanks for some fantastic artwork and humour over many years. You've earned your rest. My condolences to you, Matt and to Ronald's family and friends.

Ronald Searle will be sorely missed by many; a very sad day. Please do continue the blog, as it has been so inspiring.

Sad to hear, one of my true inspirations has passed away... This blog will allow his legacy to continue. R.I.P Ronald Searle

Thank you for all the inspiration Ronald Searle very few artists can match your line and none have the same edge to their work. You are still one of my true inspirations. R.I.P Ronald Searle

Ronald was a great inspiration for many of us. He will be truly missed

RIP Master Ronald!
You were and are a
BIG inspiration to me.
From your
prison camp
masterpieces
and beyond.
What can i say
but 'draw on'
the eternal line!

A giant. The greatest and most influential cartoonist of the 20th century- bar none.

Thank you for this site. It is a fitting tribute to this man and his wonderful work.

I am saddened but grateful he stayed with us-still leading the way- as long as he did.

This is how it's done- the art of cartooning.

Very affected by this disappearing. C 'est one of those who m 'ont given desire to draw. Modestly I held shines pay tribute on my blog
http://jmigruet.blogspot.com

Thank you for the tribute blog to Searle, one of my favorite blogs.
And many thanks to Ronald Searle.
I have always been inspired by the amazing work of him and this helped me to improve my drawing.
Thank you Searle!

Bill O'Toole said...
This comment has been removed by the author.
3:47 PM

Many thanks for posting the links to the various obits, Matt. I was away that week so it was great to read and listen to them, particularly the ones from fellow artists.

Sad news but the man and his work will live on in your excellent blog - it has become the definitive depository for all things Searle.