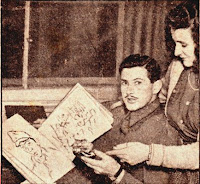 Several remarkable resources have recently become available giving insight into Searle's Army days and his incarceration as a POW.
Britain At War has this article with links to some of Searle's POW sketches. Returning from the war in 1945 Searle was profiled in Reynolds News and Sunday Citizen.

The Imperial War Museum, London has dozens of drawings viewable online here.  It seems the entire sketchbook of Searle's convoluted passage to the Far East is included on the IWM website.  It illuminates daily life during a prolonged voyage across the Atlantic from Scotland to Halifax, down to South America, around Africa en route to Singapore. 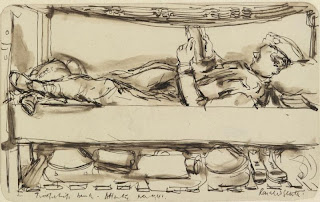 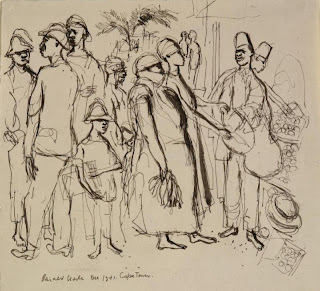 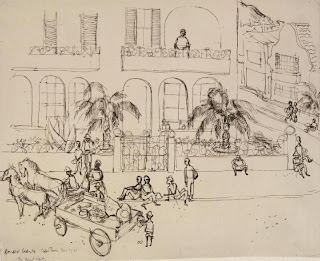 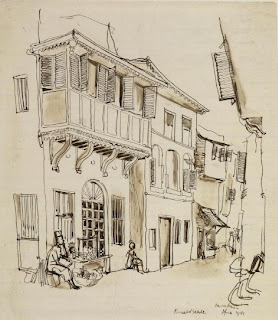 It's remarkable to see in these drawings all the tics and visual cues that would later become indicative of Searle's mature style. The combination of mark-making; scratchy lines and smudging anchored by bold outlines; graphic stylisation of facial features, long limbed figures, architectural studies with character, tonal shading on ONE side of a figure etc. 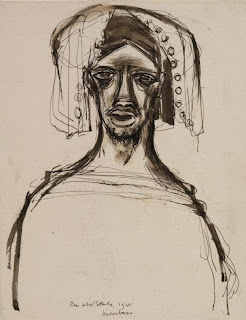 Contributor Kevin O'Brien sent in this shot he took in the IWM of Searle's prison camp drawing kit. 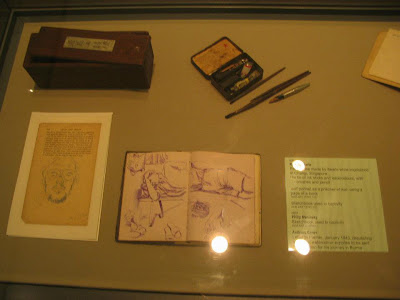 The Victoria State Library, Australia has put online the Lofty Cannon Collection.  The Aussie POW was a great friend to Searle at his lowest ebb in the prison camp and he features in several of these drawings given to him after the war. 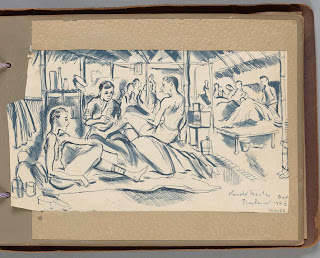 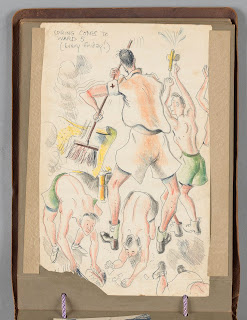 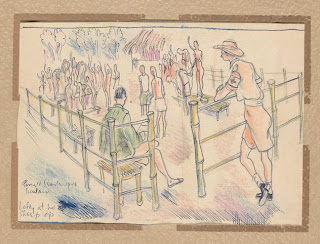 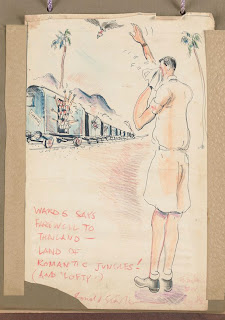 Whilst incarcerated in Changi the prisoners kept their spirits up and their minds occupied by putting on shows to which Searle contributed sets. Des Bettany (portrayed here by Searle) was a fellow artistically inclined inmate who collaborated with Searle.  See their elaborate programmes and read further at a website devoted to his POW artwork here.

Sonia Kretschmar writes about 'The Survivor' the magazine Searle conributed to with a "print order of five and a readership of fifty thousand" in Changi prison. She has posted scans from the Royal College of Art's ARK magazine with an article on Searle the survivor.  See it here

Inscribed 'completed for Ronald Pantling 18 years after all this!' retrospectively dated 1963.  Further signed by members of the cast and production team.

(Executed in Changi Gaol 1945 on reverse of a list of prisoners of war.)


This is Gloucestershire reports on Syd Tavender, a fellow former POW of Searle's.

'The pair met when working in the gardens of Singapore, Mr Tavender said, and were in terrible physical shape after enduring horrific conditions when forced to work on the Burma to Thailand railway.
Mr Tavender, who lives in Up Hatherley, said: "When we were working the gardens, having come down from Burma, we were wrecks. We were just skin and bone.
"He was still drawing then. I knew him reasonably well. I used to talk to him when we were doing the gardening. . . " 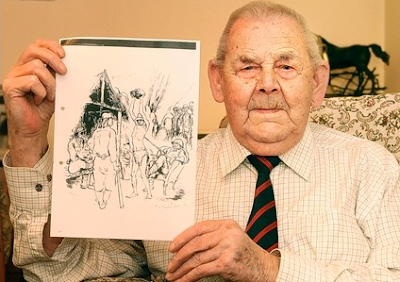 The Churchill College 2010 newsletter magazine carried this article on Canon Noel Duckworth- a much respected figure amongst the inmates of Changi. 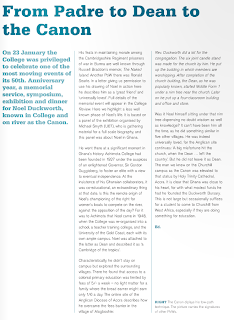 The article quotes a letter from Searle and publishes a drawing of Duckworth by Searle, signed by other POWs. 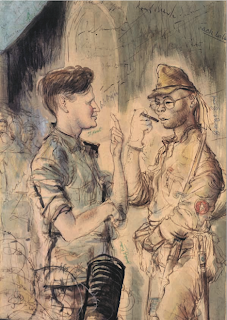 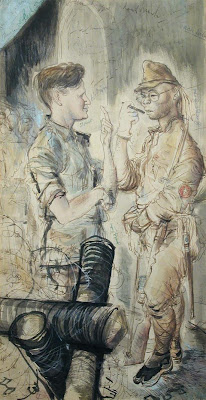 "It is especially a tribute to two men--Padre Noel Duckworth and Major Kevin Pagan--who lived more
fearlessly and more gently than all others."  -Russell Braddon


hair-raising tales of the last few months: more outstanding than any of our own leaders or than any of our Japanese guards: more outstanding even than the two eviltempered brigadierswas a rosy-cheeked little man who a few years before had been small enough to cox the Cambridge VIII all over Europe, and who at the battle of Batu Pahat had been big enough, though a non-combatant and ordered not to, to stay behind with the wounded who could not be evacuated, He stayed there and, when the Japanese swept down the road and would have slaugh tered the wounded, this little man flayed them with such a virulent tongue that they were sufficiently disconcerted to refrain. They beat him up very cruelly for days, because they did not care for being verbally flayed, even in a language they did not understand, but they did not kill the wounded men he had stayed behind to protect In the end, they allowed the little man, and the handful of R.A.M.C. orderlies who with equal heroism had faced certain capture, pos sibly murder, to look after their charges, to collect what food they could and provide for the helpless men. This little man with the rosy cheeks and the cheerful grin and his mop of hair like a small boy's eventually brought all his orderlies and his wounded to the comparative security of the gaol. His name is Padre Noel Duck worth. It is a name which tens of thousands of Australians, English men and Scots will always remember till the day they die." 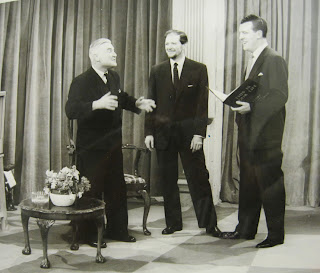 On the left Canon Noel Duckworth, principal subject of 'This Is Your Life' (12th January 1959) listens while Ronald Searle reminds him of an amusing incident of the past. 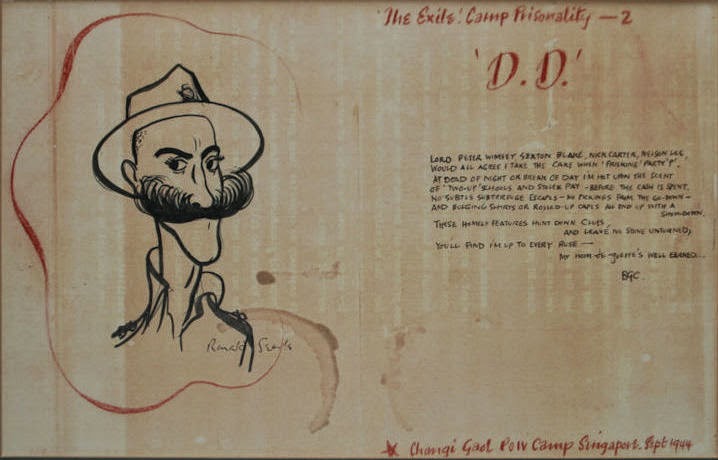