"In 1970 Hbc celebrated the 300th anniversary of its founding and decided to end production of the calendar. The Company created a major splash by commissioning famed cartoonist Ronald Searle to produce drawings for its anniversary publication, a light-hearted history of Hbc written by Kildare Dobbs, The Great Fur Opera: Annals of the Hudson's Bay Company 1670-1970 as well as for the final edition of the calendar. That year 124,000 English and 8,100 French copies of Hbc's calendar were circulated.

The year 1970 marked the 300th anniversary of Hbc's founding. In honour of the Tercentenary, the Company commissioned famous British caricaturist Ronald Searle to create a series of illustrations based on significant moments in Hbc's history. These illustrations were to accompany a comic epic written by Kildare Dobbs entitled The Great Fur Opera, Annals of the Hudson's Bay Company 1670-1970. Searle's illustrations infuse Dobbs' humorous prose with his own satirical wit. Three additional drawings were produced to be published for the final Hbc calendar in 1970 and consequently are the last images in the famous Hbc calendar series. 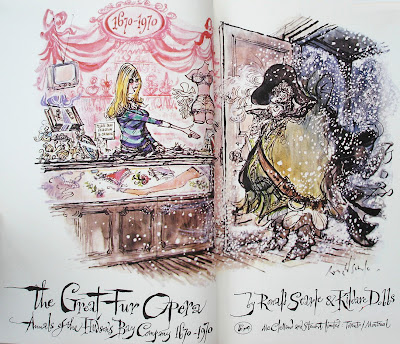 The drawings produced for The Great Fur Opera form a unique group within the Hbc Collection. Searle's style is remarkably detailed and yet gives the appearance of having been drawn in haste. His drawings have an almost sketch-like feel to them, with "scribbled" shading, dots and swirls used to convey the sense of movement, depth, atmosphere and emotion. His compositions are a mass of detail, every line adding personality and zing to the subject, engaging the eye as it searches through the welter of marks and scratches to enjoy the oddities of character and circumstance Searle uncovers in his subjects. The figures he draws, whether kings or paupers, are infused with personality through a variety of weird abnormalities of appearance. A large gnarled nose, spiky unkempt hair, large uncouth mounds of facial hair, elongated and thick buck-teeth, uproariously large and beady eyes, unusually long and stringy limbs, gaping mouths, silly grins, unnaturally large boots on bean-pole legs - these are just some examples of the exaggerated and ludicrous physical deformities and strange attire that Searle uses to great effect. 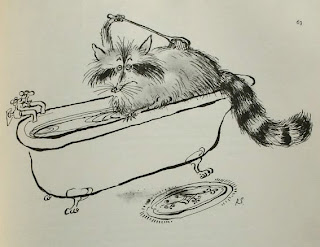 Ultimately though, it is Searle's wit that guides his hand and illuminates his work with his own satirical twist. He has the capacity to find the "funny" element in the most seemingly straightforward of subjects. The majority of his drawings are done in black pen, ink and wash, but a few have colour added to them as well. A good example is the drawing used for the cover of the book: a colourful image depicting a bear, a beaver and a caribou in their pink naked skins selling their fur pelts at a company post. Searle's work has come to be highly valued by collectors who perceive the artist's skill in being able to strike that note of satire, which sometimes verges on the daring or shocking, but never quite manages to completely offend. 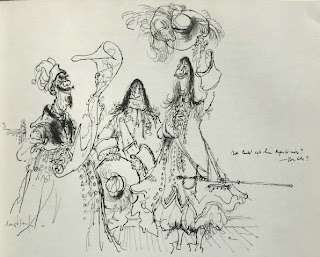 When Dobbs' "comic epic" based on the history of Hbc was presented to the public in 1970, Herald Magazine published a review of the work under the heading "History Played for Laughs". The magazine described Dobbs as a "classicist given to irreverent reveries" who has written a history of the Company that is "wild, but never dull." Dobbs' history of Hbc is coloured by exaggerated personalities and comedic situations, with the added infusion of wit from Searle's accompanying illustrations. 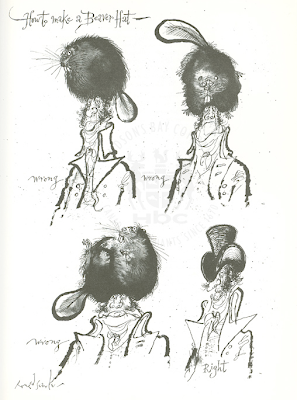 In the fifth chapter of the book, which is given the lengthy title In which is offered a Riddling Bestiary or Sequence of Beastly Riddles, being an introduction to the fur-bearing creatures; together with Notes and a Dissertation on the Beaver, Dobbs uses a very academic approach to describe what he sarcastically refers to as "this exemplary rodent". Dobbs wryly outlines how the beaver was perceived throughout the ages from antiquity to the present day. He selects some of the more fascinating perceptions of the beaver from the past. He explains how the beaver became recognized as the Emblem of Prudent Sacrifice in ancient times because the animal was known to tear off its own testes when attacked by hunters. Apparently, the clever animal realized that the hunters simply wanted the precious medicinal castoreum contained in his glands, so the beaver "prudently sacrificed" his testes to save his own skin. Later, when the hunters realized that the beaver's skin was just as valuable for making a gentleman's hat, the "exemplary rodent" was unfortunately out of luck. Dobbs delights in relaying how it was commonly believed that one had only to wear a beaver hat "to acquire a prodigious memory and never to forget what one had read". The beaver hat had gained enormous value.

Ronald Searle, inspired by Dobbs' "dissertation on the beaver", provides an illustration entitled How to make a Beaver Hat. According to Searle's informative, albeit unscientific depiction, no matter how you try it, the result is the same: placing a live beaver on top of one's head is wrong. With this kind of absurd sarcasm, Searle's illustrations give Dobbs' self-described "comic epic" its distinctive style and appearance. In his dedication page, Kildare Dobbs declares that, "merely to look at Mr. Searle's pictures is an infallible cure for the Vapours". (N.B. According to Webster's Medical Desk Dictionary, "the vapours" is a medical term no longer in use referring to a depression or hysterical nervous condition.)

Dobbs describes the book as "a cheerful, backstairs view of three hundred years of history, enlivened by digressions, parodies, poems and other interruptions and inventions." And, in keeping with such comic interventions and digressions, here are some "travellers tips" from Dobbs' text for those who plan to venture out into the Canadian wilds. Dobbs advises that the "old ways are best" when travelling in the Canadian North:

The first necessity is to keep warm. Early Company servants sometimes froze to death. Survivors had learned the secret of keeping warm: BE DIRTY. Nothing is more calorific than a thick coating of filth.

Dobbs also provides a recipe for pemmican, the high-fat food of Company that sustained men on long journeys during the fur-trading era, and a source of nourishment that will likely make the modern-day reader squirm. He suggests that if one does not have direct access to buffalo or caribou, there is no need to worry because pemmican "can still be prepared in the privacy of one's home" as follows:

Find some old, dried-out ends of meat and cut off the hard outside crusts. Pound these to dust in a mortar. Add mouldy raisins, buckshot, and a jug of melted, rancid animal fat. Sprinkle with long black hairs and poodle-clippings. Stir. Pour into an old shoe and refrigerate. After six months a greenish fur will have grown on the pemmican. Remove and keep this; it is pemmicillin. Pemmican is rich in nutriment, containing 180 calories per ounce. Do not remove them.

The Great Fur Opera: Annals of the Hudson's Bay Company 1670-1970, written by Kildare Dobbs and illustrated by Ronald Searle, was published by McClelland and Stewart Limited. Although out of print it can still be found in second-hand bookstores and libraries." 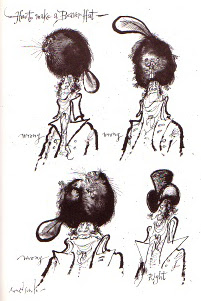 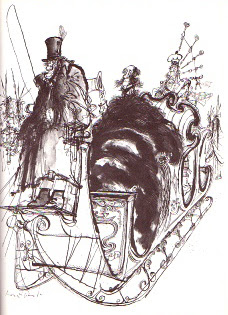 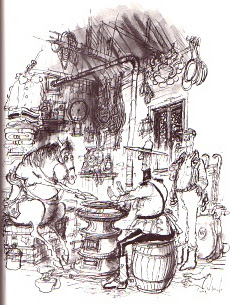 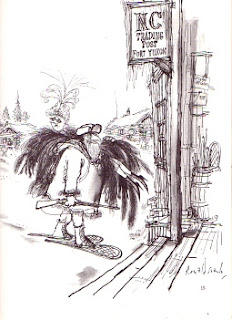 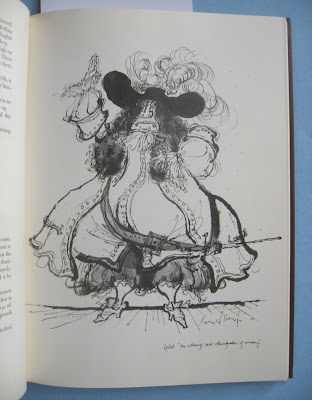 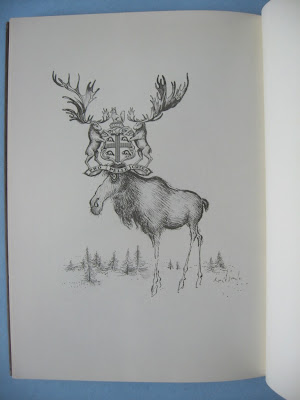 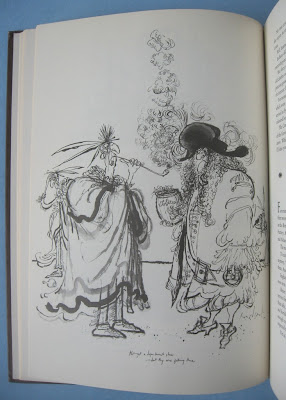 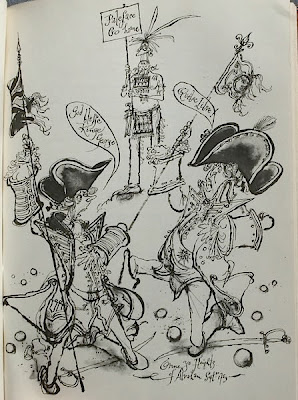 Monday May 2nd 2016 HBC is celebrating its 346th anniversary! 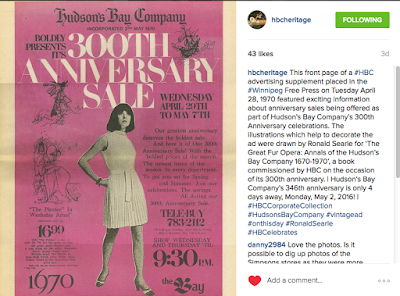 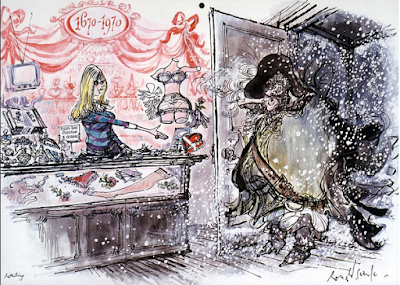 'Frontispiece from The Great Fur Opera: Annals of the Hudson’s Bay Company 1670-1970, "a witty and irreverent glance" at HBC’s history commissioned by #HBC on the occasion of the company’s 300th anniversary in 1970. The book was illustrated by Ronald Searle and written by Kildare Dobbs.'
HBC on Instagram 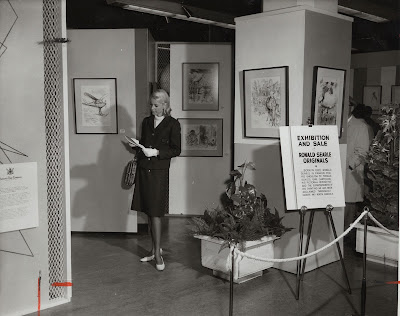 Store displays in 1970 sold Searle originals! The seaplane visible on the left of the lady above turned up in a yard sale years later and the buyer contacted me with a scan for my 'Ronald Searle's America' ( I include a chapter on North America). Behind the lady is this image of Lunenberg, Nova Scotia (below) now in the collection of Kevin Reeves. 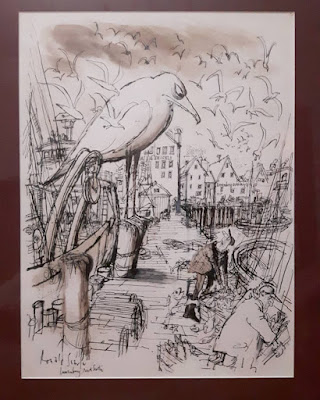 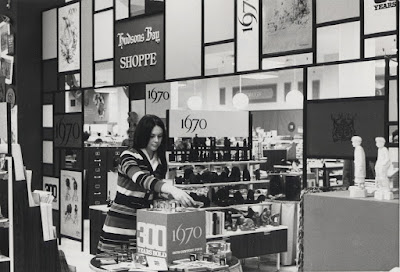 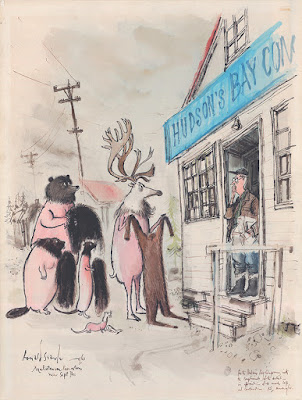